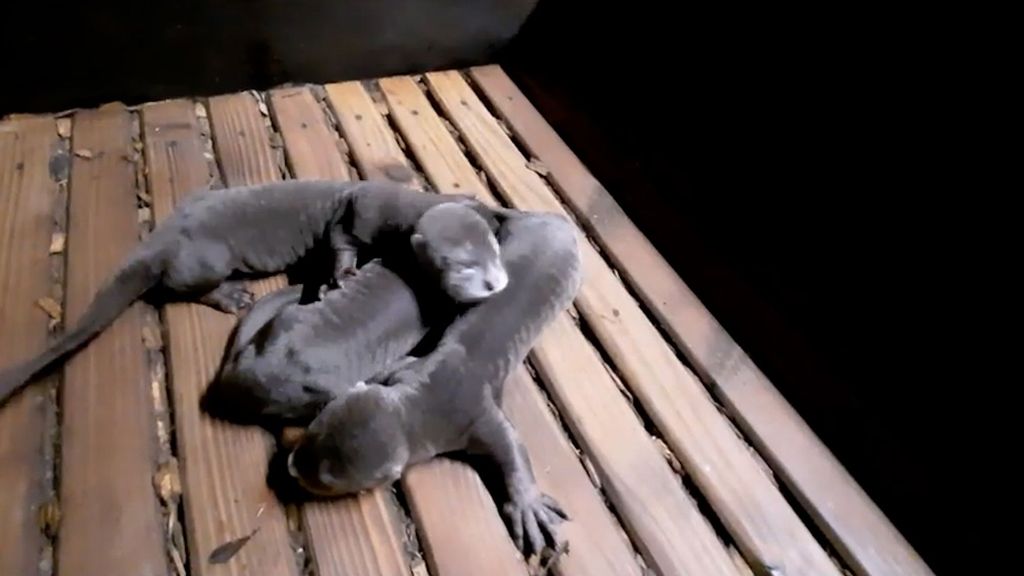 The three baby giant otters listed as endangered in the IUCN Red List of Threatened Species which were born at the Leipzig Zoo in Germany on 17th March 2022. (Zoo Leipzig/Zenger).

Three adorable endangered giant otter pups will be raised alone by their mum after their father died waiting for the littler to be born.

But mum Emila – eight years old – can count on support from her other children from previous litters at Leipzig Zoo, in Saxony, in eastern Germany.

Zenger News obtained this heartwarming footage of the cute pups from zoo officials, taken shortly after their birth.

One of the trio can be seen restlessly trying to find a comfortable position to nap, before apparently settling down as the footage ends.

The pups can be heard purring in complete contentment.

The zoo said in a statement: “Emila, 8, gave birth to three offspring on March 17.

“She gave birth to her young animals in the secure whelping box in the indoor stable of the facility.

“For Emila it is the third litter after 2020 and 2021, which she has to take care of alone, as breeder Tacutu unfortunately died at the beginning of the year.

“Nevertheless, Emilia receives support from the cubs from the last two litters.”

Zoo Director Joerg Junhold said: “Births to critically endangered species, such as the giant otter, are always gratifying and it’s nice to see that the animals are comfortable with us and breed regularly.

“So far, Emilia has been raising the cubs on her own and the cubs appear to be healthy. Neither the animal keepers nor our veterinarian have examined the young, so we don’t yet know what the gender distribution looks like.”

The zoo added: “Emilia is still caring for her offspring in the indoor stable, but has already begun to take individual young animals to the outdoor area for a short time window.

“However, it will be some time before the offspring can be seen regularly in the outdoor area in Gondwanaland.”

Gondwanaland is an area of Leipzig Zoo that “allows you to experience the tropical rainforests of Africa, Asia and South America with all of your senses.”

It is named in reference to the ancient supercontinent of Gondwana that formed during the late Neoproterozoic and began to break up during the Jurassic period, millions of years ago.

Their natural habitat is in South America, predominantly along the River Amazon in Brazil, but their population declined dramatically in the 20th century, after they were poached for their pelts, resulting in them being listed as endangered in 1999.

«Previous Post
Cat Shot At And Shelled In War-Torn Ukraine Travels Over 2,500 Miles To Be Reunited With Family»Next Post
Can You Read Your Pets’ Mind? Most Americans Think They Can