People can hear whirs, puffs, and zaps recorded on the Red Planet, thanks to the new devices on the Perseverance rover.
By Martin M Barillas April 11, 2022
Facebook
Twitter
Linkedin
Email 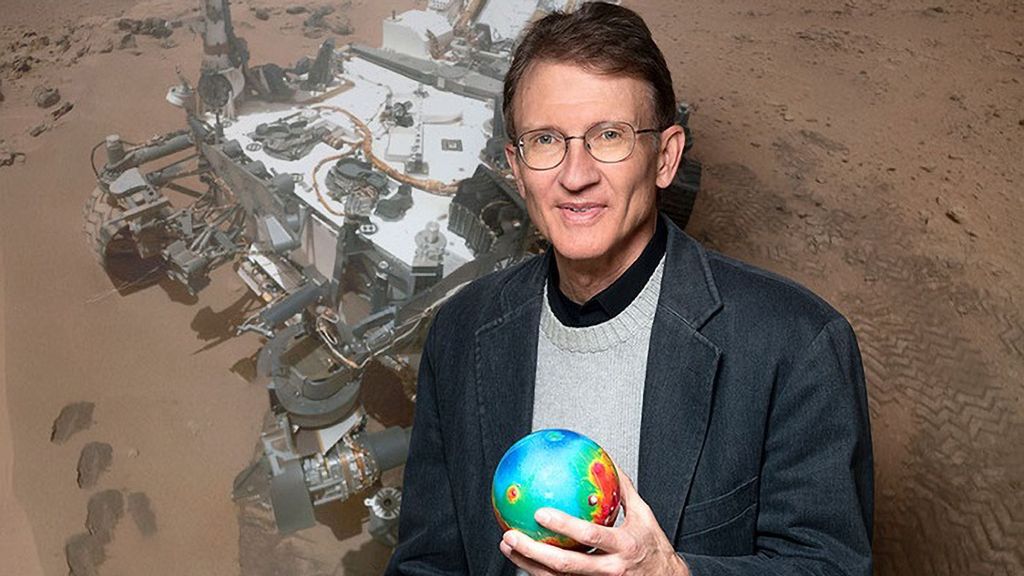 Roger Wiens, a planetary scientist and Mars rover expert at Purdue University with a topographical model of Mars and a photo of Curiosity. (Purdue University-John Underwood/Zenger)

The scientists who created high-tech electric ears for the Mars rover – allowing them to hear the Red Planet for the first time – have revealed how they are helping in the search for life.

For the first time, people can hear whirs, puffs, and zaps recorded on the Red Planet, thanks to the new devices on the Perseverance rover.

In a paper published in the journal Nature, Wiens and his team noted, “Prior to the Perseverance rover landing, the acoustic environment of Mars was unknown.”

SuperCam is an upgrade from the Chemistry and Camera complex (Chemcam) on the Curiosity rover, which explored Mars in 2012.

It features remote-sensing instruments, including two lasers and four spectrometers that seek organic compounds betraying traces of possible microbial life on the planet.

SuperCam and Perseverance headed to Mars in July 2020.

By adding microphones to Perseverance, scientists are capturing data on the planet like never before.

A microphone is found on the side of the rover, while another is on a mast rising above it.

By using a spectrometer to observe the light emitted from the rocks, scientists can identify their elements.

And the microphones can pick up details of how dense or hard the rocks are from the sounds they make when they are lasered.

Wiens said: “When we zap these rocks, we can find out more about their hardness and composition by listening to the change in sound as a number of laser shots get fired into the rock in the same spots.”

In audio recorded by SuperCam from Mars’ surface, there are audible clicks corresponding to the laser strikes on rocks.

Wiens explained: “We can hear the helicopter Ingenuity, which is something we didn’t expect to be able to hear.

“We can hear the wind and measure the speed and direction, as well as measure the size and speed of dust devils.”

Also, by listening to the sounds Perseverance generates, ground control can monitor the rover’s wellbeing.

The microphones recorded pings and puffs of Perseverance’s Gaseous Dust Removal Tool (gDRT), which blows shavings off rocks that the rover has scraped for examination.

Wiens said Mars’ status as the most Earth-like planet in the solar system means it could help unlock clues about our planet’s future.

He said: “Understanding what happened on Mars – how those lakes and rivers vanished – and whether there was ever life on Mars, helps us understand our own planet, its fragility, how it has changed over time, and life on our own planet.

“What’s more, humans may someday live on the red planet.”

Wiens said the team was surprised to see volcanic rock at the rover’s landing site, in the Jerzero crater, which happens to be a lake basin.

He said: “We had expected to find mudstones from the lake bottom. In fact, the crystals were large, suggesting that the igneous rocks were formed well underground.”

Using SuperCam’s small telescope, the team looked at the mouth of an ancient river and found large boulders, indicating that the river had experienced flash floods.

Wiens said: “Mars is revealing an amazing story from its deep past.

“The Perseverance rover will travel through various kinds of terrain – a river delta, a carbon-rich area, a crater rim with ejecta blocks – all of these are firsts for a mission on another planet.

“As Perseverance goes through each of these regions, SuperCam will be the instrument to listen, see, and sniff (or zap) the rocks around the rover, providing new discoveries for all of us earthlings.”

Before securing a spot for SuperCam on the mission, Wiens and his team met the challenge and beat many competitors.

He said: “We were amazed to get the call from NASA Headquarters! Then there were many times during development when our components didn’t work as expected, and we had to innovate.

“The worst time was when a thermal test went very wrong and cooked (destroyed!) a major part of SuperCam shortly before we were to install it on the rover. We had to re-assemble a new instrument from spare parts, working two shifts and weekends, but we made it.”

Wiens expects that SuperCam will be used on future Moon missions, saying: “All of its techniques for chemistry and mineral compositions are relevant there too.”

However, a microphone is not feasible because of the absence of air on the Moon.

The team is also working on using it on Venus. Wiens said: “It’s a hellish place – terribly hot and high pressure and NASA has never landed there yet – but SuperCam works rapidly, and it could make measurements quickly, before the lander overheats.”

Scientists have gained a new appreciation of the cold, thin, CO2-rich Martian atmosphere, where sound is not only slower but also varies in pitch (frequency).

While terrestrial sounds travel at 767 mph, low-pitched sounds on Mars travel at about 537 mph and higher pitches at 559 mph. This is the first time the phenomenon has been observed.

Wien said: “Things sound different on Earth because the rover’s ears are shaped different from ours and the atmosphere is so different, but we’re making recordings and learning things every other day.”

On Mars, sound travel drops off at just 26 feet and higher pitches are lost entirely in that distance. In contrast, sounds might drop off after about 213 feet on Earth.

Because of its low atmospheric pressure, Mars is very quiet. However, as the seasons change, pressure increases, possibly making the planet noisier.

Recordings made by SuperCam revealed for the first time the variations in pressure caused by wind turbulence. Wind gusts on the Red Planet were also measured in another first.