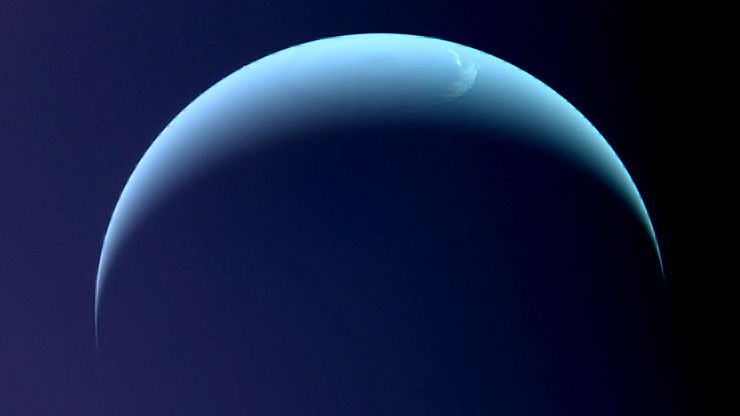 Ice giant Neptune is getting colder, according to new research. (Matthew Newby/Zenger)

The ice giant Neptune is getting colder, according to new research.

Temperatures in the planet’s stratosphere dropped by roughly 14 degrees Fahrenheit (8 degrees Celsius) between 2003 and 2018.

The solar system’s outermost planet is over 30 times as far from the Sun as Earth.

Lead author Dr. Michael Roman, of Leicester University, in the UK, said: “This change was unexpected.

“Since we have been observing Neptune during its early southern summer, we would expect temperatures to be slowly growing warmer, not colder.”

The distant world is invisible to the naked eye – setting it apart from Mercury, Venus, Mars, Jupiter, Saturn, and Uranus.

Temperatures in its atmosphere have unexpectedly fluctuated over the past two decades.

The international team used observations from ground and space-based telescopes in thermal-infrared wavelengths beyond the visible light spectrum.

By analyzing the data, they were able to reveal a more complete picture of trends than ever before.

The scans showed a decline in brightness – indicating a decline in globally-averaged temperatures in the second layer of atmosphere as you go upward.

But it takes over 165 years to complete an orbit around its host star – so they last more than 40 each.

Study co-author Dr. Glenn Orton, of the Jet Propulsion Laboratory in California, said: “Our data cover less than half of a Neptune season, so no one was expecting to see large and rapid changes.”

Yet at Neptune’s south pole the stratosphere warmed by roughly 20 degrees Fahrenheit (11 degrees Celsius) between 2018 and 2020 – reversing the previous trend.

Such warming has never been observed on the ice giant before.

Dr. Roman said: “Temperature variations may be related to seasonal changes in Neptune’s atmospheric chemistry, which can alter how effectively the atmosphere cools.

“But random variability in weather patterns or even a response to the 11-year solar activity cycle may also have an effect.”

The 11-year solar cycle – marked by periodic variation in the Sun’s activity and sunspots – has been previously suggested to affect Neptune’s visible brightness.

The new study suggests a link between solar activity, stratospheric temperatures, and the number of bright clouds seen on Neptune.

Follow-up observations of the temperature and cloud patterns are needed to further assess any possible connection in the years ahead.

The James Webb Space Telescope (JWST) – launched on Christmas Day – is set to observe Neptune and Uranus later this year.

Co-author Professor Leigh Fletcher, also from Leicester, will lead the project. He said: “The exquisite sensitivity of the space telescope’s mid-infrared instrument, MIRI, will provide unprecedented new maps of the chemistry and temperatures in Neptune’s atmosphere, helping to better identify the nature of these recent changes.”

The average temperature on Neptune has previously been recorded at minus 353 degrees Fahrenheit (minus 214 degrees Celsius).

The study was published in Planetary Science Journal.