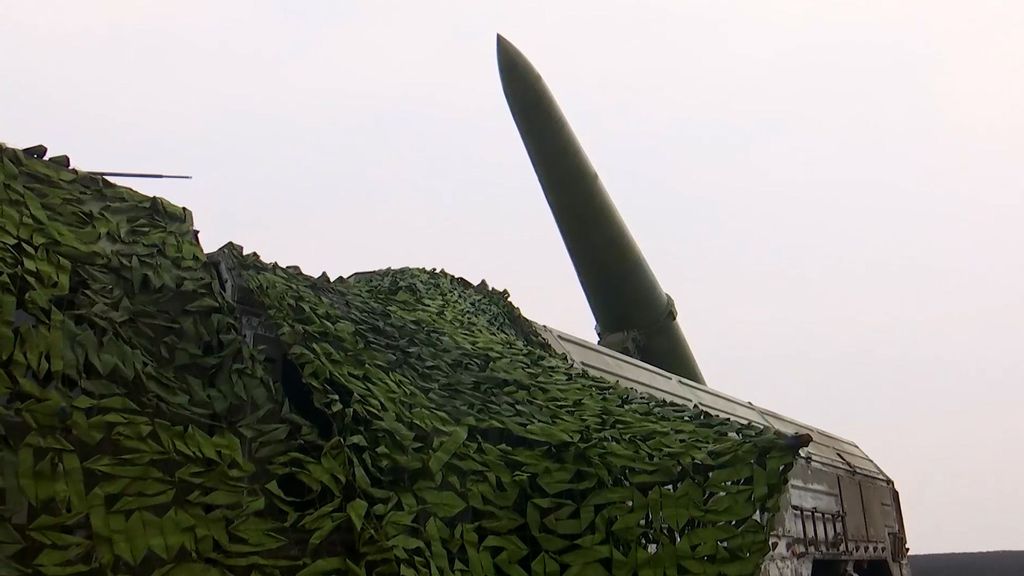 This is the moment a short-range ballistic missile strikes Ukrainian military forces, according to Russian sources.

The footage begins by showing what the Russians said was an “Iskander operational-tactical missile system” moving around a muddy field.

A white ‘Z’ can be seen on the large military vehicle as it maneuvers into position.

The footage then shows two soldiers wearing balaclavas inside the vehicle, with one driving and the other apparently in charge of navigation.

The vehicle can be seen following a dirt track. It then changes course and continues to drive across muddy terrain.

A third soldier is then shown operating the vehicle’s launch system.

His hands can be seen operating a computer keyboard before the footage cuts to the outside and shows the deployment of a missile.

The missile rises slowly from the vehicle into a vertical position. It is then launched into the sky as the footage ends.

Zenger News obtained the footage and a statement from the Russian Ministry of Defence (MoD), with the Moscow authorities saying: “The Armed Forces of the Russian Federation, in the course of conducting a special military operation, continue to strike with precision-guided missiles at military infrastructure facilities and military equipment of the Armed Forces of Ukraine.

“To solve the tasks set, the Iskander operational-tactical missile systems (OTRK) are involved, among other things.

“The rocket men are entrusted with the task of destroying especially important objects of the enemy’s military infrastructure with pinpoint strikes. With high-precision strikes, the crews of the Iskander OTRK disable and destroy command posts, warehouses with weapons, ammunition and fuels and lubricants (fuels and lubricants), communication centers, air defense equipment (AD), and other important targets.

“Only in this way the work of the calculations remains effective and prevents the return fire of the enemy. Calculations do not doubt the accuracy of their complexes. All set targets are guaranteed to be destroyed, and intelligence reports the exceptional precision of the missilemen’s work.”

It is currently unclear where exactly the footage was filmed.

According to the Oryx Blog, Ukraine has lost at least 736 military vehicles or pieces of military equipment – including 103 tanks – over the course of the invasion so far.

The Oryx Blog is run by “Stijn Mitzer and Joost Oliemans, two military analysts devoted to investigating and sharing the ins and outs of conflict research, open-source intelligence, and the occasional obscure piece of military history”.

The blog only lists losses for which there is visual evidence, meaning the true numbers are likely to be higher.