Cat Shot At And Shelled In War-Torn Ukraine Travels Over 2,500 Miles To Be Reunited With Family

The cat had to travel 2,500 miles across five European countries to reach the family’s home in the village of Thorney.
By Anamarija Brnjarchevska April 11, 2022
Facebook
Twitter
Linkedin
Email 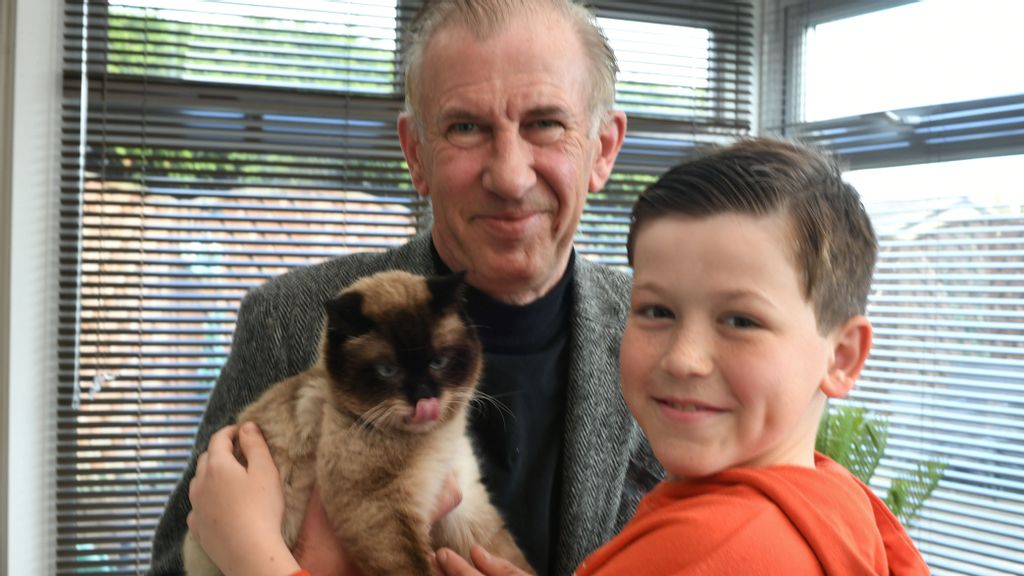 A cat has travelled over 2,500 miles across five countries to be reunited with its family after being shot at in war-torn Ukraine. (JP Peterborough telegraph/Zenger)

A cat has traveled over 2,500 miles across five countries to be reunited with its family after being shot at in war-torn Ukraine.

British citizen Frank Anderson, 56, and his Ukrainian wife Olha, 48, had planned to bring their six-year-old cat, Murchik, to their home near the city of Peterborough, in Cambridgeshire, in the United Kingdom from the family home in the city of Irpin, located on the outskirts of the capital Kyiv, in Ukraine.

The family was told that they were not allowed to bring Murchik – who had been living at Olha’s mother’s home until her death in August 2021 – until February 1, due to post-Brexit regulations.

But their hopes were dashed as Russia’s invasion of Ukraine began three weeks later on February 24. It took the family five attempts to get their six-year-old cat, Murchik, across the Ukrainian border.

The cat then had to travel 2,500 miles across five European countries to reach the family’s home in the village of Thorney, also in Cambridgeshire, about 8 miles from Peterborough.

Frank said: “As far as my wife Olha is concerned, the cat is part of the family – so, saving the cat was the equivalent of saving her mum had she still been alive.

“We were just on the last legs of finalizing the arrangements and then the invasion happened.

“We got the cat back on Tuesday (April 5). Half his journey was in the middle of a warzone – he’s been shot at, shelled, and heard constant sirens.

“For the first week that he was in Irpin, I’m in no doubt that he’s seen and heard things that we would probably all be in a bad place if we experienced.”

Their cat was previously being looked after by the neighbors of Olha’s former family home.

However, they were forced to leave their home one week into the conflict because of constant shelling and could not take Murchik with them.

Frank said: “Eventually the shelling and the fighting got too much and the neighbors said ‘We need to get out of here – but we won’t be able to take the cat because there won’t be enough room in our car’.

“We managed to convince her to drop the cat off at a friend’s in North Kyiv.

“He was there for a couple of weeks while we were still trying to make arrangements, but it wasn’t safe for anyone to be traveling across the country.

“We eventually managed to get someone who was heading towards Lviv that was willing to take the cat with them.

“We got the cat to Lviv – so at least we knew he was safe. It was then a case of getting him across the border.”

In a bid to be reunited, Olha flew to Austria at the start of this week before picking up Murchik and traveling by train through Germany and France – where Frank picked them both up in his car.

Frank added: “Plan B was that we were just going to jump in the car and travel to Lviv and do it ourselves – which was going to take three days.

“We weren’t going to jump over Plan A until we had exhausted all of our options. But if there was no other way of getting the cat back, we would’ve had to do it.

“The week before the invasion my wife was planning to do exactly that. I was almost at the point of hiding the passport. I couldn’t bear the thought of her being stuck there and us being here.

“He’s lost a lot of weight. Sometimes he hides under the bed upstairs but most of the time he’s been walking around and being friendly.

“We’ve got him booked into the vet for a physical inspection tonight. He can’t talk to us so we can’t see how he is mentally.”