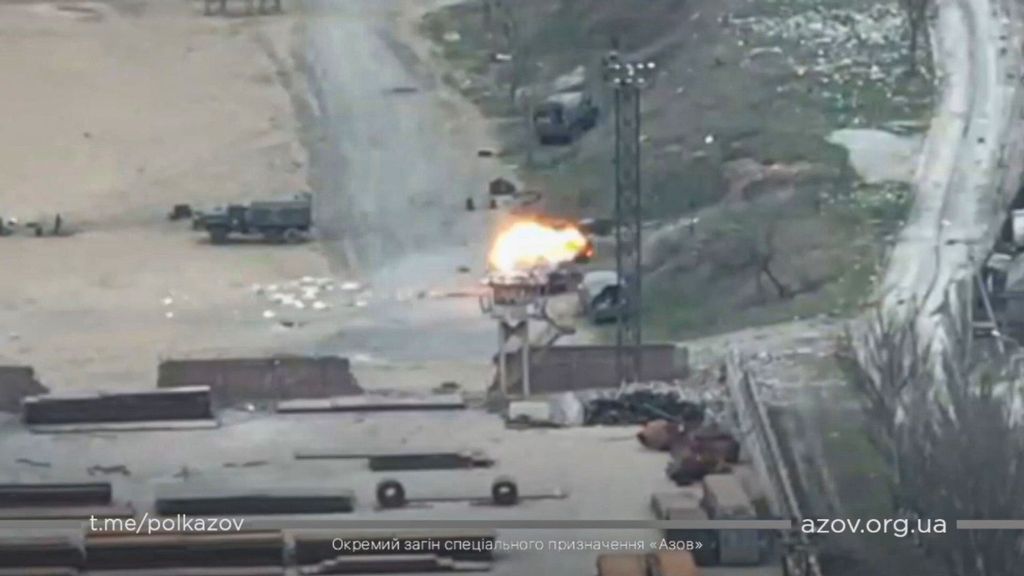 Destruction of a Russian military vehicle in April 2022. (@polkazov/Zenger)

This is the moment Ukrainian troops blow up a Russian multi-purpose vehicle on a beach in Mariupol.

Zenger News obtained the footage from the Azov Regiment on April 9.

Azov – which is a unit of the National Guard of Ukraine – said soldiers calculated the enemy’s position on the beach in the besieged city and fired mortars at equipment.

The video shows a coastal strip with a collection of multi-purpose military trucks on the sand.

It goes on to show one vehicle suddenly exploding and bursting into flames.

Azov said: “Soldiers of the Azov Regiment effectively worked out the positions of the Russian occupiers from where they fired mortars.

“The enemy’s KrAZ was damaged without the possibility of further operation and the occupiers’ BC was destroyed.”

KrAZ is a manufacturer of multi-purpose vehicles. “BC” may refer to ammunition, though it is not clear.

Meanwhile, Azov reportedly seized two foreign ships in the Port of Mariupol over the weekend.

Commanders of the Donetsk People’s Republic (DPR) said the regiment is holding the crews of the Tzarevna carrier and Lady Augusta cargo ship, sailing under Maltese and Jamaican flags respectively, hostage.

While occupying both vessels, the regiment is reportedly firing grenades and mortars from the decks.

The Azov Regiment, formally known as the Azov Special Operations Detachment and formerly called the Azov Battalion, has been active since May 2014.

In September of the same year, it was incorporated into the National Guard of Ukraine, the country’s national gendarmerie.

The regiment has far-right origins. However, only a minority of its estimated 900 members are believed to have far-right tendencies these days.

The siege of Mariupol has been ongoing since day one of the invasion and has seen an estimated 90 percent of the city damaged or destroyed.

Ukrainian officials say over 5,000 civilians have been killed in the siege so far.