The strike reportedly took place in the easternmost Ukrainian region of Luhansk Oblast during the night of April 10 to April 11.
By Lee Bullen April 11, 2022
Facebook
Twitter
Linkedin
Email 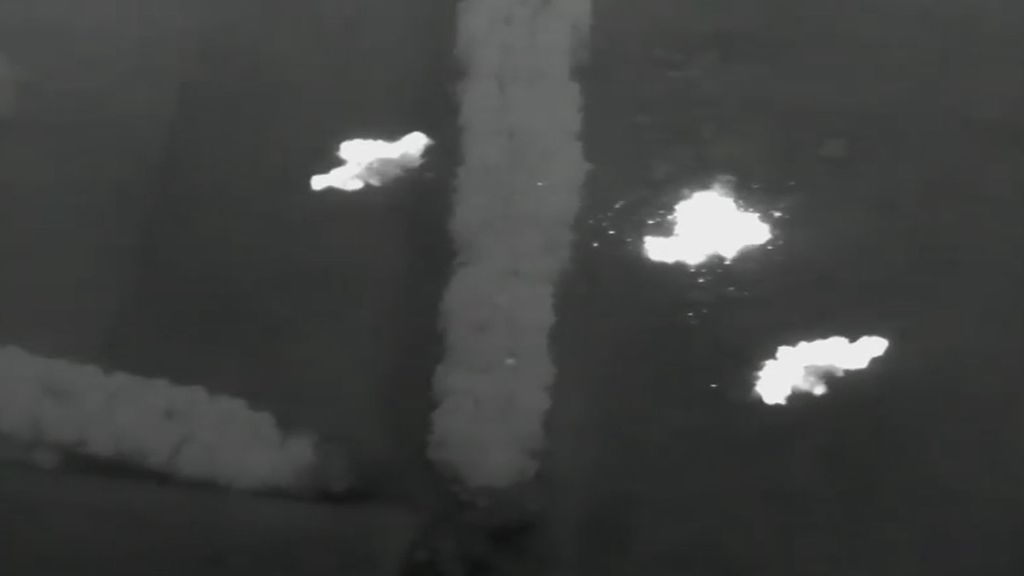 The artillery of the 57th Separate Motorized Infantry Brigade destroyed a Russian field ammunition depot, on the night of 10th and 11th April, in the Luhansk direction, Ukraine. (@57InfantryBrigade /Zenger)

This is the moment a huge fireball fills the sky as Ukrainian defenders reportedly blast a Russian ammo depot in a spectacular rocket blitz.

The strike reportedly took place in the easternmost Ukrainian region of Luhansk Oblast during the night of April 10 to April 11.

The Ukrainian military claimed troops of the 57th Motorized Infantry Brigade attacked the Russian ammunition depot and caused it to burn throughout the night.

The warehouse was reportedly full of equipment and munitions, all of which was lost following the strike.

The footage apparently shows a Ukrainian missile hitting the Russian ammo depot, quickly followed by two other strikes nearby.

Huge plumes of smoke fill the air as more missiles rain down in the nearby area.

As the smoke thins, the fire at the ammo depot is seen intensifying and Russian rockets apparently fly out of the blazing warehouse after igniting in the flames.

The 57th Motorized Brigade, which is a formation of the Ukrainian Ground Forces, said this morning: “Day 47. On the night of April 10-11, in the region of Luhansk, the artillery of the 57th Motorized Infantry Brigade destroyed an enemy field ammunition depot.”

The Ukrainian brigade added: “Victory for us!”

The General Staff of the Armed Forces also said about the strike: “57 OMBR destroyed a Russian ammunition depot during the night. It burned until this morning.”

The 57th Motorized Brigade was formed in November 2014 in the city of Kropyvnytskyi, in Kirovohrad Oblast, in central Ukraine, and initially consisted of three volunteer defense battalions. By the summer of 2015, the brigade was deployed to fight in the war in the Donbas region.

Ukrainian President Volodymyr Zelenskyy says Russia is concentrating tens of thousands of soldiers for its next offensive in eastern Ukraine.

Parts of Luhansk and Donetsk Oblasts, the country’s two easternmost regions, have been under pro-Russian separatist occupation since 2014.