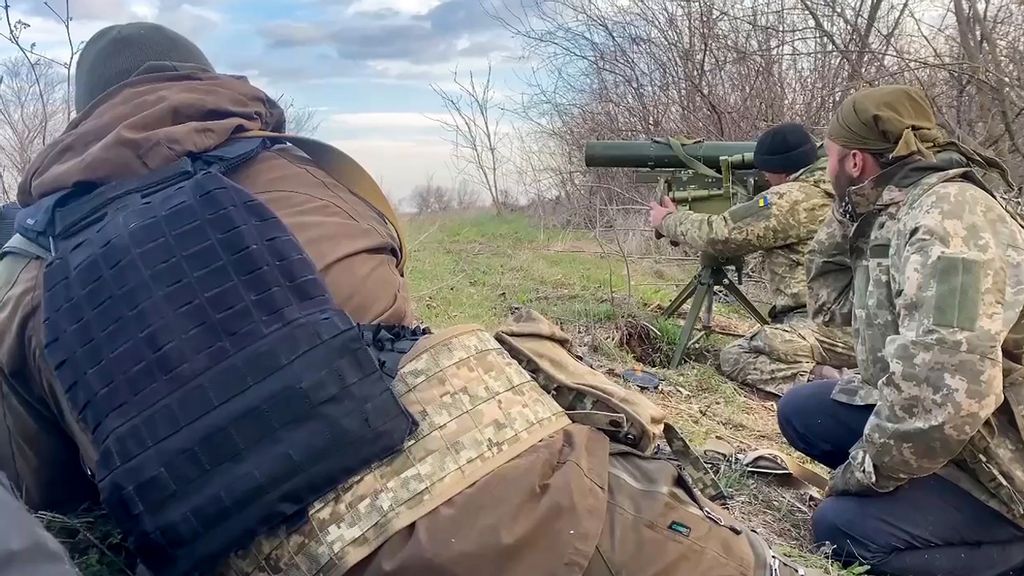 The head of the Nikolaev regional military administration, Vitaliy Kim, showed how Ukrainian defenders destroy a Russian tank on a highway in the Kherson region in April 2022. (@mykolaivskaODA/Zenger)

Laughing Ukrainian troops took out a Russian tank with a rocket launcher as a penalty for ‘traffic violations’.

The footage – shared by Mykolaiv governor Vitaliy Kim – shows a five-man team aiming a tank-busting weapon at an armored vehicle in the distance.

After pulling the trigger, an enormous plume of black smoke appears in the distance, to the delight of the Ukrainian fighters.

Governor Kim later quipped: “The police patrol of the Mykolaiv area, together with ZSU [Armed Forces of Ukraine] on a business trip in the Kherson area brought to justice the violator of traffic !!!)”

In the footage, as the troops walk away, one of the soldiers reportedly says, in Ukrainian: “This is for Mykolaiv… You broke a window in our house, so we took this tank from you.”

Mykolaiv has been devastated by constant Russian shelling, as it has served as a buffer area from which a defense has been mounted by the Ukrainians to stop one of many Russian attempts to advance on the strategically vital port city of Odesa.

Kherson has been under Russian occupation since 2nd March. It is the only Ukrainian regional capital to have fallen into the hands of the enemy.

Dementiy Bilyi, head of the Kherson regional department of the Committee of Voters of Ukraine, recently posted an appeal on social media requesting humanitarian assistance from the Red Cross and claiming that civilians there are being illegally detained and tortured.

He said: “I urge you to send representatives of the International Committee of the Red Cross to the Kherson region to provide humanitarian assistance to illegally detained civilians, fix their place of residence and help stop torture and release them from prison cells as soon as possible.”

There have been increasing reports from the Ukrainians and from western media outlets of atrocities having been committed by Russian forces, with disturbing images emanating from recently liberated towns across the parts of the country from which the Russian forces have seemingly withdrawn.

The United Nations’ Secretary-General, Antonio Guterres, told the Security Council on Tuesday, 5th April: “I urge the Council to do everything in its power to end the war and to mitigate its impact, both on the suffering people of Ukraine, and on vulnerable people and developing countries around the world.”