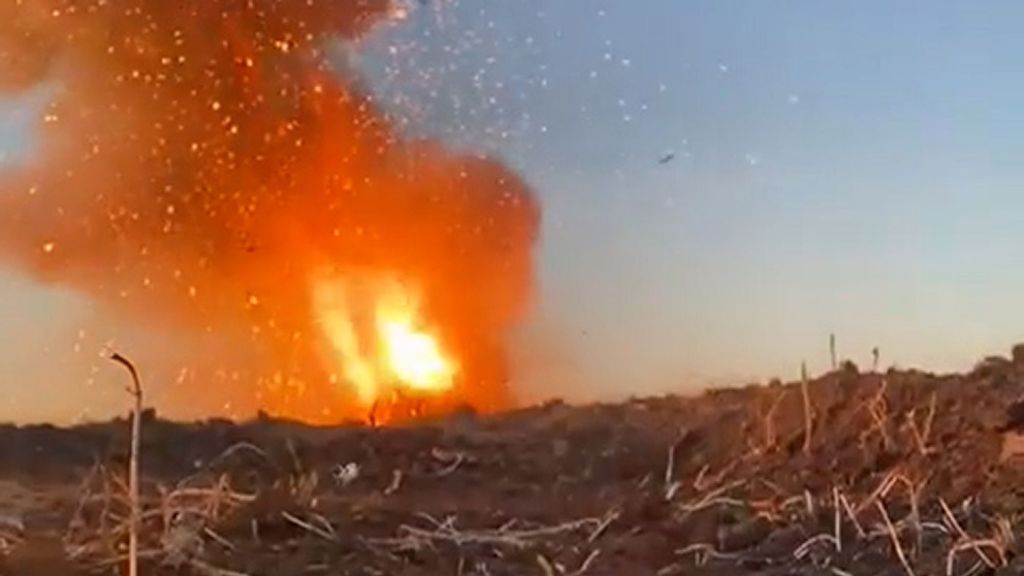 The moment when the Russian tank was destroyed by soldiers of the 25th separate airborne brigade in Ukraine. (@dshv25opdbr/Zenger)

This is the shocking moment Ukrainian paratroopers explode a Russian tank with such force that its massive turret flies high into the air before falling back to the ground.

Known as the Jack-in-the-box effect, it happens when an anti-tank projectile or shaped-charge blast manages to penetrate a turreted armored vehicle’s hull and its ammunition storage area.

The shock wave or heat and pressure can be sufficient to cause the detonation of the tank’s entire load of unfired explosive shells and propellant, as appears to be the case here.

Zenger News obtained the footage from the General Staff of the Armed Forces of Ukraine on Thursday, April 7.

The Ukrainian military said: “A reconnaissance officer of the 25th separate airborne brigade of the Sicheslav Brigade recorded the moment when the Russian tank was destroyed by its fellow paratroopers.”

The Russian T-72 that was destroyed reportedly utilizes a mechanical round autoloader, which feeds the charges from a carousel at the turret base up to the 125mm smoothbore gun.

Tank rounds are also stored in and around the hull, and a few in the turret.

When the tank armor is penetrated, the charges in the carousel ignite, sometimes blowing the entire turret off the hull, as apparently seen here.

In contrast, the M1 Abrams, which is the US equivalent tank, has its rounds stored in a completely armored bustle at the rear of the turret, with blow-out panels on top of the bustle on the turret roof.

If the armor is penetrated and rounds begin cooking off, the blast is directed upwards and out through the blow-out panels, giving the crew members a much higher survivability rate than those of their Russian counterparts.

It is not clear where exactly the strike took place, but the 25th Airborne Brigade is garrisoned in Hvardiiske, in Dnipropetrovsk Oblast, in east-central Ukraine.