Fan Plastic! How Plastic Waste Could Be Used To Grab CO2

The breakthrough came from boffins at Rice University, in the city of Houston, in the US state of Texas.
By Marija Stojkoska April 8, 2022
Facebook
Twitter
Linkedin
Email 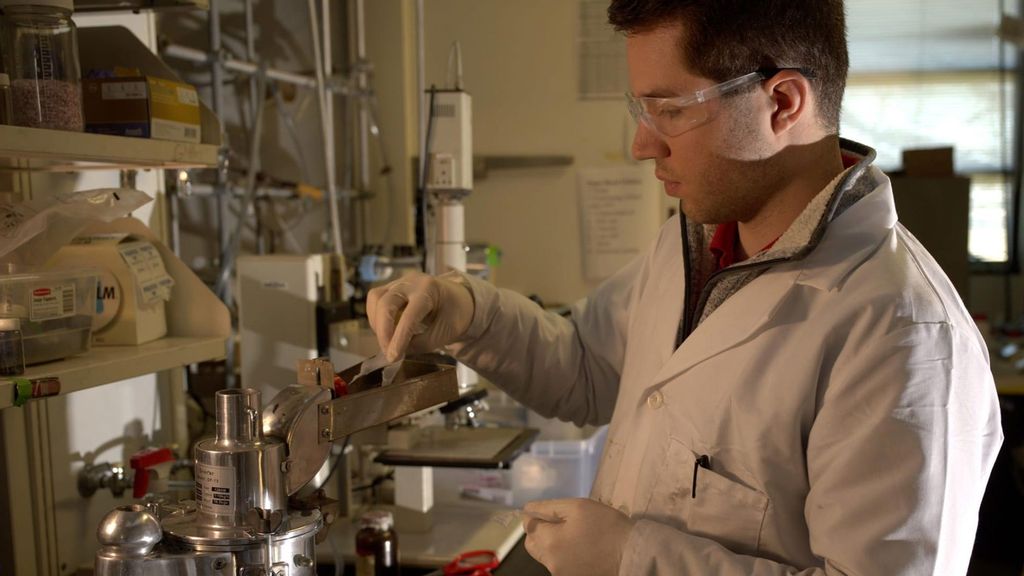 Graduate student Paul Savas feeds raw plastic into a crusher to prepare it for pyrolysis, or heating in an inert atmosphere. (Jeff Fitlow/Zenger).

The breakthrough came from boffins at Rice University, in the city of Houston, in the US state of Texas.

Researchers James Tour, Wala Algozeeb, Paul Savas, and Zhe Yuan found that when potassium acetate is present during the pyrolysis of plastic waste, the resulting particles can capture carbon dioxide.

Pyrolysis is the chemical change brought about by the action of heat.

The scientists say that heating the plastics with potassium acetate present produces particles able to hold up to 18 percent of their own weight in carbon dioxide at room temperature.

This is believed to be an improvement on the current process to pyrolyze plastic -known as chemical recycling – which produces oils, gases, and waxes, but the carbon byproduct is almost useless.

Tour said in a statement obtained by Zenger News: “Point sources of CO2 emissions like power plant exhaust stacks can be fitted with this waste-plastic-derived material to remove enormous amounts of CO2 that would normally fill the atmosphere.

“It is a great way to have one problem, plastic waste, address another problem, CO2 emissions.”

And it is even cheaper, too. It is estimated that the new process would cost up to eight times less than current carbon capture treatments.

A press release by Rice University said: “To make the material, waste plastic is turned into powder, mixed with potassium acetate, and heated at 1,112 degrees Fahrenheit (600 degrees Celsius) for 45 minutes to optimize the pores, most of which are about 0.7 nanometers wide. Higher temperatures led to wider pores.

“The process also produces a wax byproduct that can be recycled into detergents or lubricants.”

Global atmospheric carbon dioxide concentrations are rising largely because of the burning of fossil fuels for energy.

Carbon dioxide is a greenhouse gas – it absorbs heat and releases it gradually over time.

Meanwhile, plastic waste can lead to the leaching of toxic chemical constituents into food, drinks, and water.