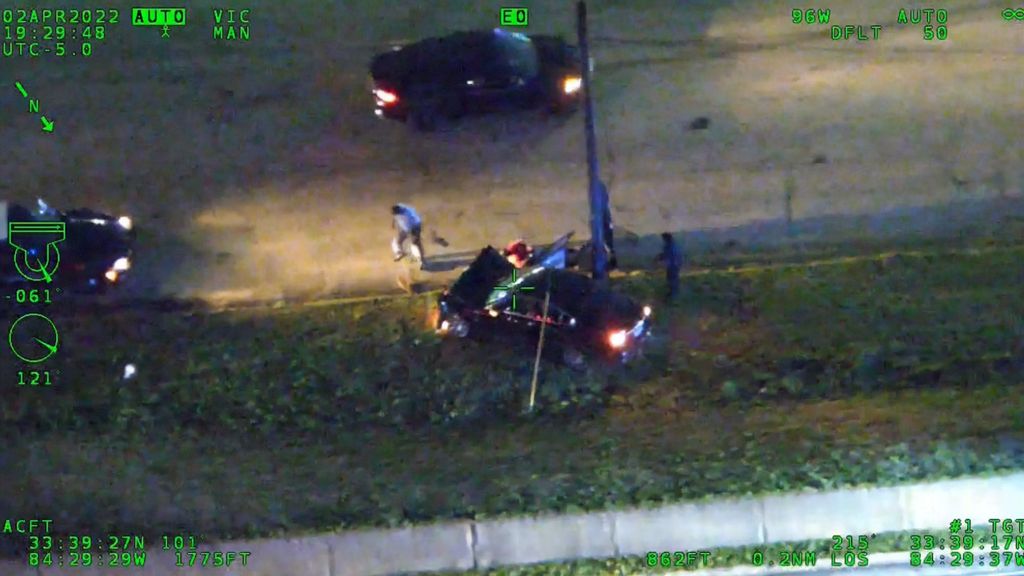 A speeding driver carrying drugs and a handgun was seized by police in a fast-food drive-through after they forced him off the road.

Cops in Atlanta, in the US state of Georgia, had earlier tried to flag down the suspect’s luxury Jaguar XF, but he had refused to stop, said officials.

And in a high-speed chase, the suspect’s car rammed another vehicle before police managed to shunt him off the road.

Police body-cam footage shows him being seized as he tried to climb over a fence out of a burger bar he had run into.

Officials said the incident took place on Lee Street at about 8:20 p.m. on April 2.

The Atlanta Police Department (APD) said in a statement on April 6: “On April 2nd, 2022, at approximately 8:19 PM, Atlanta Police initiated a traffic stop on Lee St at Westview Dr. SW on the driver of a black Jaguar XF.

“The driver of the vehicle refused to stop and fled from officers. Knowing that the Atlanta Police Department’s Air Unit (Phoenix) was overhead, officers decided to disengage from pursuit and allow Phoenix to maintain a visual of the vehicle.

“The Air Unit engaged with Atlanta Hartsfield-Jackson’s Airport air traffic control team to alert them of their direction, as the suspect seemed headed toward the airport. Clearance to proceed was granted.

“Phoenix was able to relay the location of the suspect to APD and Georgia State Patrol, allowing GSP to catch up to the driver and perform a PIT maneuver.”

The police said the suspect jumped out of the crashed vehicle and tried to escape on foot before being detained by officers on the ground.

The APD said: “The suspect subsequently bailed from the vehicle and fled on foot. After a brief foot pursuit, APD officers apprehended the suspect without incident.

“During the investigation, officers located a handgun and narcotics.”

The statement continued: “The Atlanta Police Department is thankful for the assistance of our state partners. With their assistance, APD removed this ‘wanted’ convicted felon, with a firearm and drugs, from our streets.

“We thank the A.C.E. Unit and our Air Unit whose determination, attention to detail, technical skills, and hard work pay off each week as they do their part in holding lawbreakers accountable and making the City of Atlanta safer. Job well done to all!”