The dog named Beau had disappeared down the drain on South Palm Canyon Drive, in the US state of California, on April 6.
By Lee Bullen April 8, 2022
Facebook
Twitter
Linkedin
Email 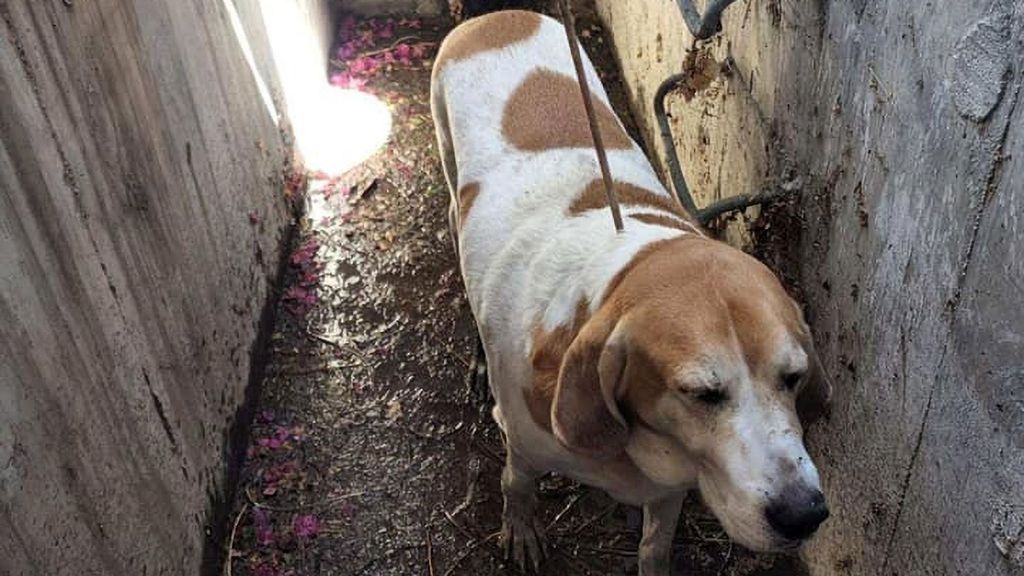 A dog trapped in a drainage ditch in Palm Springs, California, has been rescued by police officers on 6th April 2022. (@PalmSpringsPD/Zenger)

A roly-poly pooch had to be rescued from a storm drain by a search-and-rescue team after police called them in because he was too heavy to lift.

The dog – named Beau – had disappeared down the drain on South Palm Canyon Drive, in Palm Springs, in Riverside County, in the US state of California, on the morning of April 6.

His owner called the police when a passerby said she could hear a dog howling from the drainage system.

The Palm Springs Police Department (PSPD) said in a statement on Thursday, April 7: “On April 6th, 2022, at approximately 9:58 a.m., PSPD dispatch received a call from a dog owner requesting assistance after her dog went missing near a storm drain.”

His owner said the pooch was last seen near South Palm Canyon Drive and Bogert Trail before someone heard his cries in a drainage ditch at Cody Court.

The PSPD said: “The dog, who answers to the name of Beau, had last been seen thirty minutes prior near S Palm Canyon Drive and Bogert Trail.”

The police continued: “At approximately 10:02 a.m., dispatch received a call reporting someone heard the sound of a dog crying inside of a drainage ditch in the 3100 block of Cody Court.

“PSPD Animal Control Officers responded to the area and they were able to locate Beau.”

But because of Beau’s size, police had to call in a search-and-rescue team with specialist lifting gear.

The PSPD explained: “Due to Beau’s large size the team had to get the assistance of the Palm Springs Mounted Police Search and Rescue Unit.

“The unit is comprised of volunteers, who typically assist with lost or injured hikers.

“As some team members comforted Beau to keep him calm, the others developed a plan and fabricated a hoist system that would safely assist Beau out of the drain via a maintenance hole cover.”

The two teams worked together and were able to successfully lift Beau out of the storm drain.

The footage shows the rescue team pulling Beau up from the drain with a harness attached to the animal’s body.

The police said: “The Palm Springs Police Department is thankful for the dedication and compassion under which these two units operate.

“Beau was not injured during this incident. After a bunch of high-fives and head pats (for Beau) the group posed for a photo. Beau was later released to his owner.”

Animal Control Officer Anderson said: “This is the stuff that makes me keep loving what I do.”