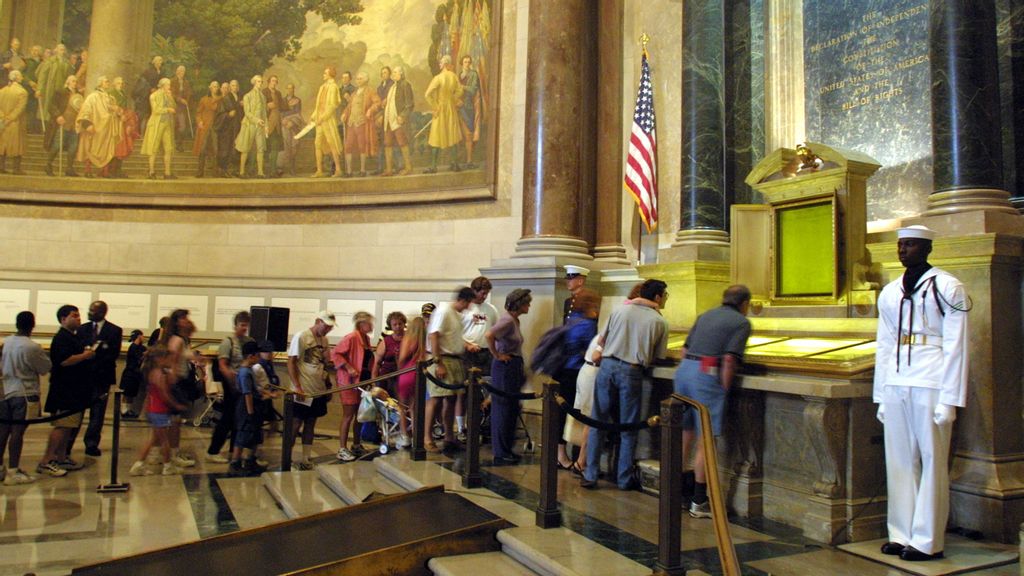 Visitors wait in line to view the original copies of the Declaration of Independence, the Constitution and the Bill of Rights July 4, 2001 at the National Archives in Washington, D. C. (Photo by Alex Wong/Getty Images)

More than half of Americans don’t know the names of all four of their grandparents, new research suggests.

A recent survey of 2,113 U.S. adults, including 1,911 from the top 10 Nielsen DMAs and 202 from Salt Lake City, found that there is a massive knowledge gap in more recent family history.

Knowledge of past generations varied by city, as 66% of Bostonians said they can name all of their grandparents, compared to only 26% of those in Philadelphia.

Conducted by OnePoll on behalf of Ancestry, the survey also found that only 4% could name all eight of their great-grandparents.

When it came to knowing the most about their family history, seventy-five percent of people in Salt Lake City said they feel knowledgeable (75%) compared to 46% of those in Philadelphia sharing that sentiment.

Despite the knowledge gap, most respondents expressed interest in learning more about their family history (66%). In particular, over half (51%) want to know stories about when their ancestors were young and what their life was like at the time.

Most people said they know the bulk of their family history from parents (43%) or grandparents (40%) relaying stories.

“Listening to family stories is a great starting point to learn about your family’s past, but some details can get lost as they are passed down for generations,” said Crista Cowan, Corporate Genealogist at Ancestry. “Digging deeper into records, such as census records, can help fill in the gaps and add rich historical context about more recent family history.”

On April 1, the 1950 U.S. Census was made public. Ancestry is indexing the records state by state to make them searchable for everyone for free. The 151 million newly released records will provide key details about more recent generations.

With the release of the 1950 U.S. Census records, people are most interested to learn their ancestors’ employment details, including salary, status and hours worked (38%) and occupations (35%), followed by names (34%) and ages (34%).

“It’s exciting that younger generations now have the opportunity to learn more about family members they know, like parents and grandparents,” said Cowan. “The 1950 Census provides a fascinating look at an era in our collective history, marking the first time baby boomers appear in a U.S. census. The real magic happens when you discover a more complete picture of not only what your family member’s life was like at a moment in time, but also how it had changed over the decades.”

WHAT DO PEOPLE WANT TO LEARN ABOUT THEIR FAMILY HISTORY?

Regions/countries their ancestors came from – 40%

The street/neighborhood their ancestors lived in – 38%