Five people were reportedly said to have been injured in the blast, which struck at Sievierodonetsk.
By Lee Bullen April 7, 2022
Facebook
Twitter
Linkedin
Email 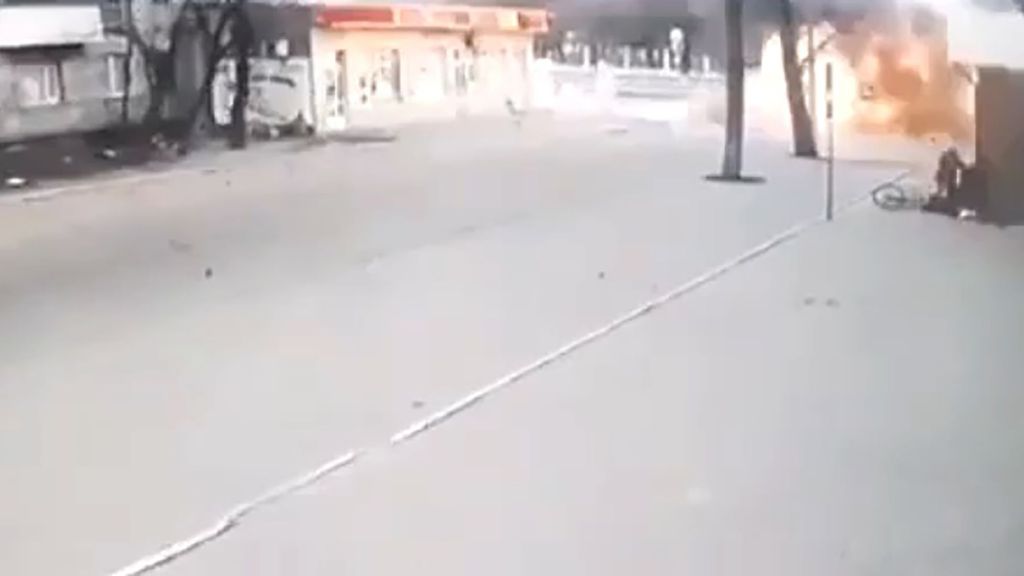 The moment of a missile exploding on the street near people walking in the residential district of Sievierodonetsk, Ukraine, in April, 2022. (Zenger)

Sickening footage of Russian troops reportedly shelling a humanitarian aid center where civilians were standing in line waiting for help has emerged from Ukraine.

Five people were reportedly said to have been injured in the blast, which struck at Sievierodonetsk, in Ukraine’s eastern Luhansk Oblast (province).

In the footage, the people outside the aid center suddenly run for cover, apparently hearing the Russian shells whistling toward them.

One shell makes a direct hit on the center, sending civilians sprawling.

Seconds later, another shell hits the other side of the street, destroying the front of a second building.

As the footage ends, one injured person can be seen slumped on the pavement in front of the aid center.

According to local reports, residents were queuing for humanitarian aid when the center was shelled by Russian troops.

Meanwhile, the Russian attack on Sievierodonetsk reportedly led to fires in 10 high-rise buildings in the city.

Governor of Luhansk Oblast Serhiy Haidai, 46, said: “Once again, we are experiencing the cynical shelling of residential areas in Sievierodonetsk.

“Russian ‘peace’ is destroying our way of life in Luhansk Oblast. Rescuers are extinguishing the fires and clearing the debris.”

Russian troops invaded Ukraine on February 24 in what the Kremlin is calling a “special military operation” in the sovereign European country.

The United Nations’ International Court of Justice, in The Hague, has ordered Russia to stop its invasion and remove its troops from Ukrainian territory.

Today marks the 43rd day of the invasion.