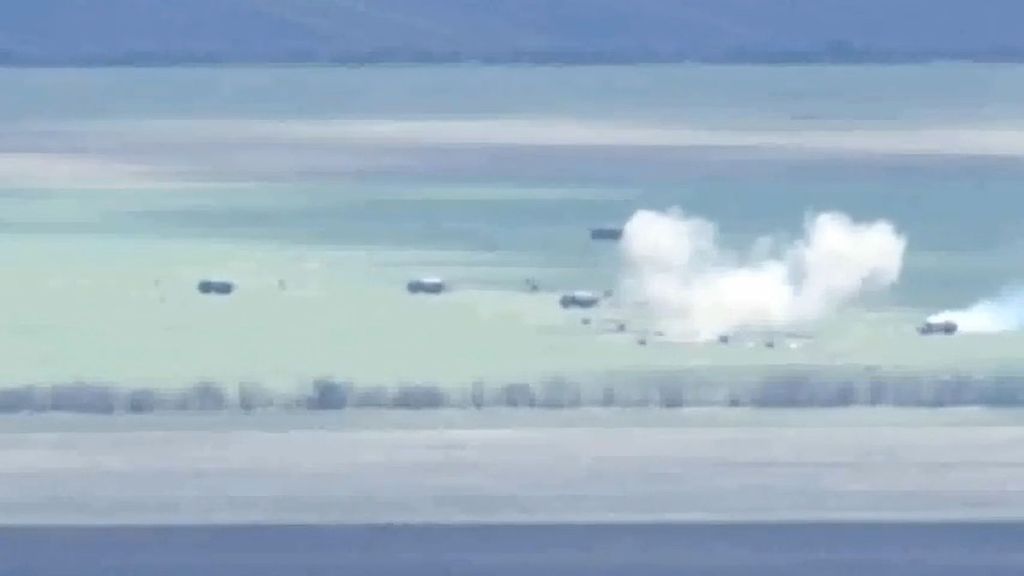 Ukrainian soldiers defeated a Russian artillery unit in the Kherson region in April 2022. (General Staff of the Armed Forces of Ukraine/Zenger)

Ukrainian missile squads are claiming to have taken out a Russian artillery unit as it prepared to shell villages in the south of the country.

Video footage of the strike apparently shows missiles raining down on the invaders as they were “preparing to shell peaceful settlements”.

One vehicle can be seen clearly as it is blown up by the attack.

The Ukrainian military said the strike took place in the southern Ukrainian province of Kherson Oblast.

The Ukrainian Armed Forces claimed the Russian unit was preparing to bomb peaceful settlements in the area and was thwarted in its attempts by the defending soldiers.

The General Staff of the Armed Forces of Ukraine reported on the morning of April 7: “In the region of Kherson Oblast, Ukrainian soldiers defeated an occupying artillery unit preparing to shell peaceful settlements.

“Unfortunately, some of the ‘liberators’ were left kicking their heels.”

The Ukrainian military added “let’s win together!” and included the hashtag ‘Stop Russia’.

On April 6, the General Staff of the Armed Forces of Ukraine said Ukrainian soldiers had seized control of the village of Osokorivka, in Kherson Oblast, from occupying Russian troops.

Russian troops invaded neighboring Ukraine on February 24 in what the Kremlin is calling a “special military operation” in the sovereign European country. Today marks the 43rd day of the invasion.

The city of Kherson is the only regional capital that Russian troops have managed to seize over the course of the invasion so far.

There have been increasing allegations by Ukraine that Russian forces occupying the city are subjecting civilians to torture and murder.

The Ukrainian state-owned news agency Ukrinform has said that the fate of many civilians in the city and the surrounding area remains unknown.

This week has seen Ukrainian forces recapture several towns from the Russians, with scenes of mass killings making headlines around the world.

Many, including US President Joe Biden and UK Prime Minister Boris Johnson, have condemned Russian President Vladimir Putin over the alleged atrocities, which have been called “war crimes”.