Officials say the fire started at a home in the city of Clarksville, in the US state of Tennessee, in the early hours of April 6.
By Lee Bullen April 7, 2022
Facebook
Twitter
Linkedin
Email 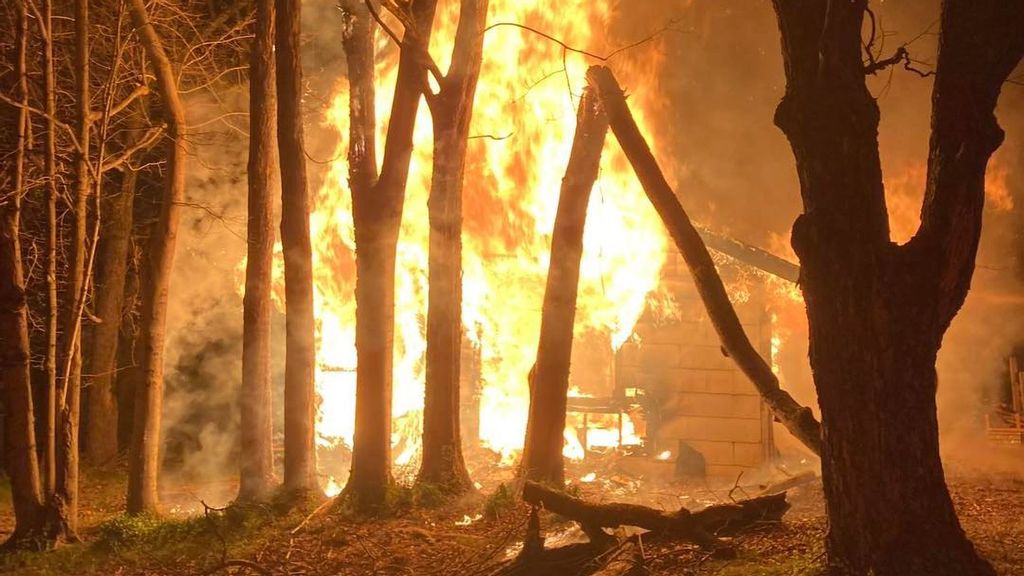 The fire in the home of wheelchair-bound Charles Harris in Clarksville, USA, on 6th April. (@ClarksvilleFireRescue/Zenger)

A brave young guitarist saved the life of his wheelchair-bound neighbor when his house went up in flames from a dropped cigar.

Plucky Anthony Hinderliter – who had been practicing his riffs – dashed straight into the burning building and wheeled stricken Charles Harris to safety.

Officials say the fire started at a home on Davis Drive, in the city of Clarksville, in Montgomery County, in the US state of Tennessee, in the early hours of April 6.

In a statement obtained by Zenger News, Clarksville Fire Rescue said on April 6: “Station 1 and Station 4 responded to a house fire on Davis Dr. at 12:44 a.m. They arrived on the scene to heavy flames and smoke coming from a back building used as an apartment.

“The 60-year-old occupant in a wheelchair was out of the building on arrival.”

They added: “When we talked to the occupant, he informed us that he accidentally dropped a cigar while setting up his bed, and the fire spread.”

“He also stated that the young man in the other house had saved his life.

“Anthony Hinderliter was up playing guitar when he noticed smoke and flames out of the window.

“He rushed outside with a fire extinguisher, which did not help, and proceeded to unlock the wheels on the wheelchair and pull him to safety and down the street.

“Thank you to Anthony Hinderliter for the bravery and the will to take action that helped save a neighbor’s life.”

Charles Harris said later his life flashed before his eyes before being rescued by Hinderliter, adding: “Every morning when I wake up, I thank God for another day.”

As Harris lost most of his belongings in the blaze, Hinderliter set up a GoFundMe campaign (www.gofundme.com/f/e2mnpq-hope-for-charlie) to help him start over and “find some hope and relief”.

The text from the GoFundMe partly reads: “As of 1 a.m. the morning of the April 6. Charles Harris was in his home whenever the fire started. Charlie is fully disabled and is wheelchair-bound. I happened to be nearby whenever I noticed smoke and fire starting to hurl itself out of the house.

“He had managed to get into his wheelchair but got stuck attempting to get out. I then managed to get him unstuck and out of the immediate area to safety. Then attempted to put the fire out with a fire extinguisher.

“Despite the effort, the fire got out of control. A call was then placed to the local Fire station who came and heroically controlled the dangerous fire.

“Mr Charles Harris is asking for anyone who can and is willing to donate to please do so. He has no immediate family and he is on a fixed income. He lost everything he owned in the fire.

“He wears 2x shirts, 2x pants, and 10 1/2 in shoes. You can also help by sending any monetary amount to cashapp tag ‘$Ichoosetopraise’ for immediate temporary assistance with helping him obtain a motel room and food.

“You can also contact him directly to donate to him if you so choose. Thank you, and God Bless. Anthony Hinderliter.”

«Previous Post
That’s Andy: Warhols Blue Marilyn Set For Record In USD-300-Million Auction»Next Post
Woman Has The Shock Of Her Life Giving Birth Alone In Shower With No Idea She Was Pregnant