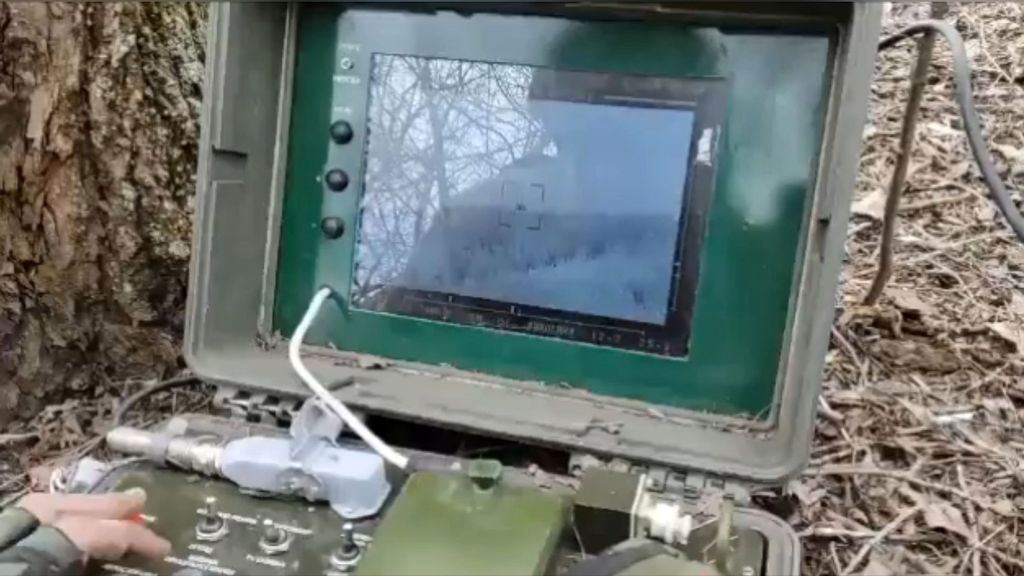 This is the video-game-like moment Ukrainian paratroopers target a Russian tank on the screen and blast it to pieces with a single shot from a homemade anti-tank guided missile system.

The Ukrainian Armed Forces said the strike was carried out by members of the 81st Airmobile Brigade.

It is unclear where in Ukraine the attack took place.

The Ukrainian Armed Forces said on 6th April: “The calculation of the Stugna-P anti-tank missile system of the 81st Airmobile Brigade of the Ukrainian Air Assault Forces of the Armed Forces of Ukraine destroyed another combat unit of Russian armoured vehicles together with its crew.

“We continue to fight! Death to the Russians.”

The anti-tank missile system, designed and manufactured in Ukraine, boasts a laser-guided system with long-range and high penetration capabilities.

The Stugna-P, also called the Skif, can reportedly penetrate armour as thick as 110 centimetres and reach distances of nearly six kilometres.

Packing a wallop, the Stugna-P anti-tank guided missile system is wreaking havoc on Russian hardware during the invasion of Ukraine.

The footage was shared by the Ukrainian Armed Forces with the message: “The 95th Brigade, with the ‘Stugna’ anti-aircraft missile system, destroyed the latest Russian Ka-52 attack helicopter! We have a victory.”

The Ukrainian military included the hashtags ‘Take a Stand’ and ‘Strong Together’.

The United Nations’ International Court of Justice, in The Hague, has ordered Russia to stop its invasion and remove its troops from Ukrainian territory.

Today marks the 42nd day of the invasion.

From 24th February to 6th April, the total combat losses of Russian troops stand at about 18,600 personnel, according to the General Staff of the Armed Forces of Ukraine.