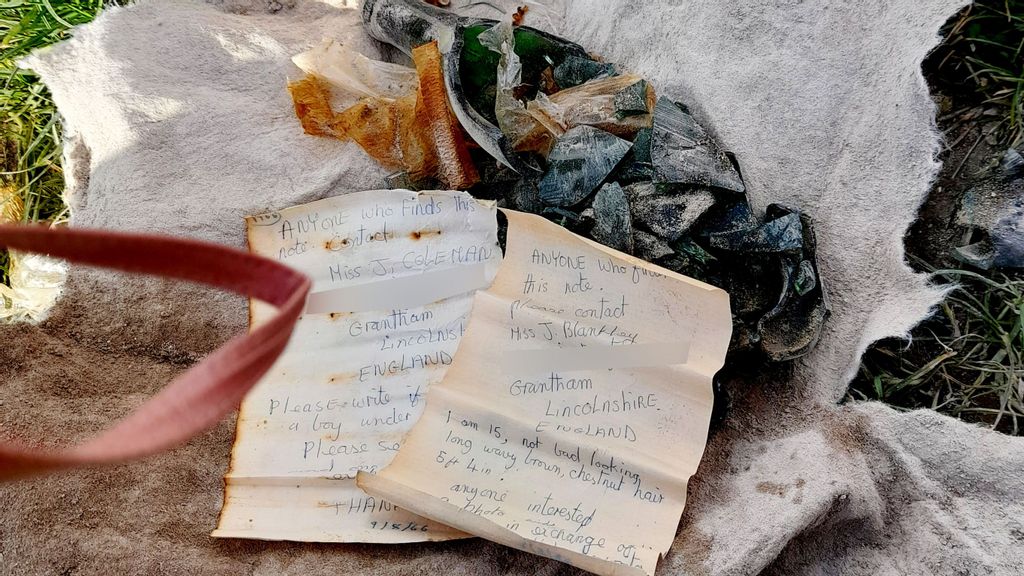 A bottle containing cheeky messages from two teenage girls asking for boyfriends has washed up after drifting in a UK river for 56 years. (Steve Chatterley/Zenger)

A bottle containing cheeky messages from two teenage girls asking for boyfriends has washed up after drifting in a UK river for 56 years.

The corked glass bottle was discovered by a group of volunteer litter pickers who were cleaning up the Humber Estuary in Lincolnshire.

The love-lorn pair wrote descriptions of themselves and invited teenage boys who found the bottle to write back to them.

“Anyone interested, a photo will be exchanged in person. Boy who writes. No one under 16 or over 18.”

“Please write if you are a boy under 18 over 16. Please send a photo and one will be exchanged. Thank you.”

The girls both included their addresses in Grantham, Lincs.

It is thought the girls were on a day trip to South Ferriby near Scunthorpe when they tossed the bottle into the river.

Tracey Marshall, 59, and her daughter Charlotte, 19, found the messages in a bottle while working for Scunthorpe Litter Pickers on Saturday.

“My daughter noticed the bottle in the reeds and in the mud and was quite buried but you could just see the top of the bottle poking out.

“Charlotte dragged it out and cleaned it and noticed there was something inside.

“We find a lot of bottles and usually put them in a recycling bag but this one had a cork so it pricked our attention so put it to one side.

“When we had finished the litter pick we tried to get the notes out but couldn’t so we actually smashed the bottle.

“Inside were two rolled-up notes, they were very very rolled up in cellophane over the top of them.

“We eventually got them open and they were two letters.

“It’s really exciting, we couldn’t believe it when we found them.

“I just popped it on social media and didn’t expect it to blow up as much as it did.”

Incredibly, Tracey was able to track Jennifer down on social media and discovered she moved to Australia with her family in 1973.

“One of the ladies emigrated to Australia in 1973. I’ve spoken to her a lot. We’re actually going to send her the letter back.

“Jennifer Anne Coleman. She was 15 when she wrote the letter with her friend and tossed it in the river in the Boston, Skegness area.

“Ironically, they tossed the bottle into this spot, so it obviously hasn’t gone far in all these years.

“We find some weird and wonderful things. We were like big kids when we find things.”

Jennifer, now aged 71, said: “Janet and I were good friends at school; we spent a lot of time together during school holidays, we went our separate ways once we finished school.

“I had completely forgotten about the message in the bottle and it is in such good condition after half a century, unbelievable.

“I can’t believe it was in the water for that long.

“I think it’s hilarious and unbelievable that it’s been there for 56 years just lying around.

“I vaguely remember sending it. I just thought it would be interesting if we ever got a reply from our notes.

“You did used to hear about messages in bottles in my childhood but I don’t think we gave it another thought afterwards.

“I lived in Grantham until I was 20. I can’t believe the letters were so well preserved after so many years.”

Jennifer had family in Ferriby at the time she and Janet wrote the notes, and so spent a lot of time in the area and going to Cleethorpes in the summer.

The group also contacted Janet’s family who say she still lives in Grantham.