PACK IT IN YOU: Sneaky Wolf Hybrid Plays For Puppy Love

The big black wolfdog is a male named Faelen, while the grey wolfdog is a female named Maeve.
By Arian Movileanu April 6, 2022
Facebook
Twitter
Linkedin
Email 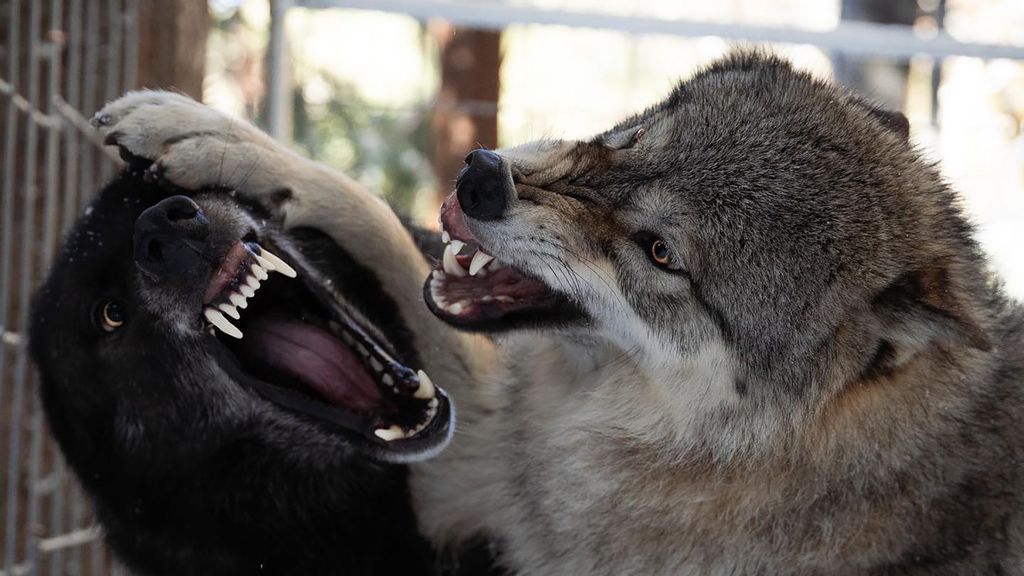 The male wolfdog named Faelen (left) together with the wolfdog Maeve (right). (@runningwithwolfdogs/Zenger).

This is the fun moment a young female half-wolf acts like a puppy in order to persuade an older male half-wolf to let her keep her wooden toy.

The footage, which quickly went viral, notching up 13 million views, was recorded in the city of Los Angeles, in the US state of California.

A wolfdog is produced from mating a dog (Canis familiaris) with a member of the wolf family, like the grey wolf (Canis lupus) or similar, to produce a hybrid of both.

Moira, the owner of the two wolfdogs in the video, told Zenger News that the big black wolfdog is a male named Faelen, who is three years old, while the grey wolfdog is a female named Maeve, and she is almost a year old.

In the video, the two wolfdogs can be seen next to a wooden log, and an explanation in the video makes it clear that Maeve had claimed it as her new toy.

Since Faelen is apparently stronger and bigger, Maeve cannot fight to keep it, so instead she plays the cute card, waving her paws in the air, and doing everything she can to distract Faelen from taking her toy.

Moira told Zenger News she has owned Maeve and Faelen ever since they were small puppies.

She added that she started working heavily on exposure and socialisation so that they would be able to cope in the human world without excessive stress.

Moira added: “We also love going on outdoor adventures like hikes and to the beach. My favorite thing is showing them the world.”

Describing the animals’ character, Moira told Zenger News: “As for wolfdogs, they are very misunderstood.

“They are more challenging and have more shared instincts than normal dogs.

“They are often more shy and skittish than dogs for example, and often exhibit more intense behaviour.

“They are not inherently aggressive, but like any dog can be dangerous if trapped and terrified.

“Higher content wolfdogs also experience a huge seasonal rush of hormones, during which they may need modified handling as they become bolder or more territorial.

“Many wolfdogs out there are just as friendly as normal dogs, especially with their human family. Wolfdogs LOVE their people, if treated properly. They may not love all strangers though.”

She added that although some people consider them aggressive animals, they are very much family-oriented and kill simply to eat.

According to Moira, wolf populations keep herbivores in check, allowing healthy plant growth and a functioning ecosystem. She said that in places where wolves and other apex predators have been eradicated, you see huge environmental problems, including overpopulation of deer, leading to starvation and disease.

She noted that wolves do not present a danger to people. Wolves attacking people is, she said, virtually unknown, and one is far more likely to be attacked by a cow or dog.

Moira said: “The goals of education and coexistence are incredibly important to me, as so much damage is done to the natural world and to wolves due to simple lack of education and misconceptions that people have about them.

“I am a firm believer that people can be open to changing their view of wolves if they’re invited to learn more about them in an open and non-critical way.”

Moira also runs her website, Running With Wolfdogs, a project about education, inspiration, conservation and coexistence with wolves.

Moira said: “The reaction to my social media pages, and now my educational organization Running With Wolfdogs, has been overwhelming and very positive.

“Millions of people enjoy watching their interactions, and learning about them! Now we are beginning to do educational presentations more in person, and helping to educate people and show them the true nature of wolves and wolfdogs which is exceptionally rewarding!”