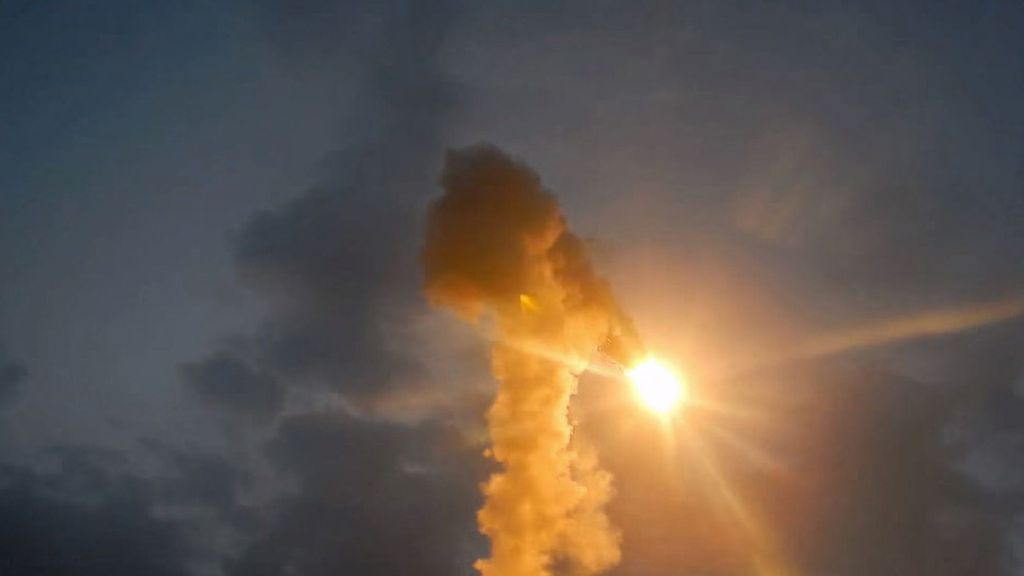 Russian Armed Forces carried out a missile strike with precision-guided weapons on Ukraine's military infrastructure in April 2022. (Ministry of Defense of Russia/Zenger).

Kremlin military chiefs have shown off what they claim is a “precision” missile strike on key Ukrainian targets from the Black Sea coast.

A video of the strike shows two missiles being launched before they disappear into the horizon.

The missile launch was filmed by Russian servicemen on the Black Sea coast as the invasion of Ukraine enters its 42nd day.

The Russian MoD said that high-precision Onyx missiles were fired at Ukrainian targets on the ground, claiming that they destroyed key military infrastructure.

The MoD stated: “The Russian Armed Forces carried out a missile strike with precision-guided weapons on Ukraine’s military infrastructure.

“The crew of the DBK ‘Bastion’ on the Black Sea coast launched two high-precision Onyx missiles at ground targets in the territory of Ukraine.”

The K-300P Bastion-P is a Russian mobile coastal defense missile system that was developed with the Belarusian company Tekhnosoyuzproekt.

The system’s main objective is to engage ships, including landing craft, convoys, and carrier battle groups.

Today marks the 42nd day of the invasion. From 24th February to 6th April, the total combat losses of Russian troops stand at about 18,600 personnel, according to the General Staff of the Armed Forces of Ukraine.

Thousands of people are reported to be fleeing eastern Ukraine as Russia shifts the focus of its attacks to the Donbas region.

After Russian troops withdrew from the north of the country, evidence of alleged war crimes, including the execution of civilians, has emerged from the town of Bucha, which is located close to the capital, Kyiv.

The disturbing footage and accounts from Bucha led Pope Francis to condemn the “massacre” and kiss a Ukrainian flag from the town during his weekly general audience at the Paul VI Hall, in the Vatican, this morning.