Good Vibrations: IVF Girls Touching Reunion With Singer Who Crooned To Her In Petri Dish

Dr Marisa Lopez-Teijon told Zenger News : "Zoe was an embryo when Antonio sang for her and the other embryos in our lab".
By Joseph Golder April 6, 2022
Facebook
Twitter
Linkedin
Email 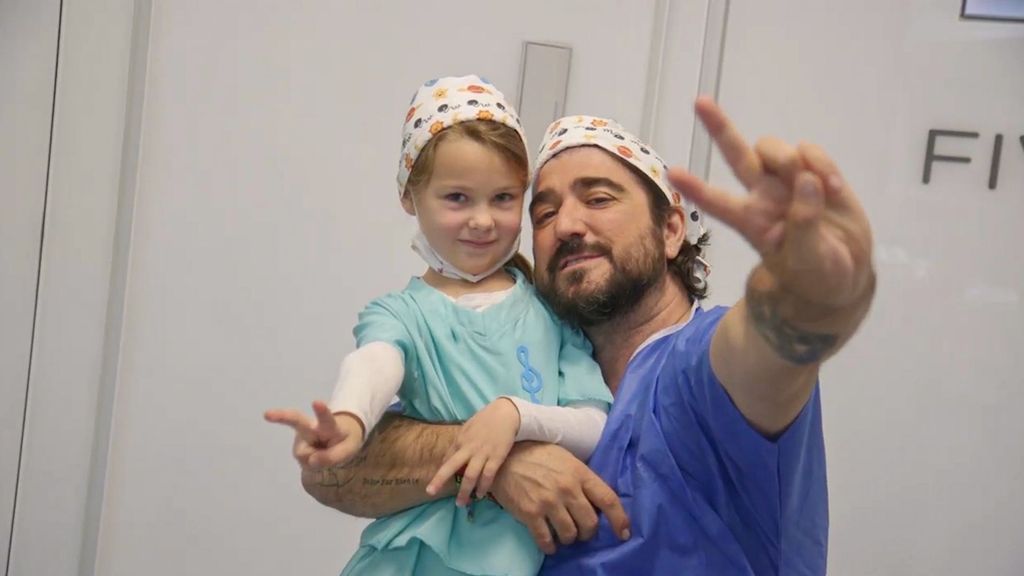 Antonio Orozco, who performed the first concert for embryos in the world at the Institut Marques in Barcelona, Spain, in July 2015, met with Zoe, who listened to the singer when she was still a five-cell embryo. (Institut Marques/Zenger)

An IVF girl has had a heartwarming reunion with a singer who serenaded her when she was just a few cells in a Petri dish.

Little Zoe, now aged seven, was in the audience for a show put on by Spanish crooner Antonio Orozco at the IVF lab where she was conceived.

Institut Marques director Dr Marisa Lopez-Teijon told Zenger News in an exclusive interview: “Zoe was an embryo when Antonio sang for her and the other embryos in our lab.

“Of course, the only thing the embryos perceived were the musical vibrations… they have four or five cells!”

And Antonio, 49, recalled: “It was a magical moment. For me, singing to the embryos was a unique experience and being part of the lives of these children since before their birth was an honor.

“Music unites us and it’s the best way to communicate. I felt a connection when I was able to hug Zoe.”

The two were recently reunited and Zoe’s parents reportedly said that music has always been an important part of their daughter’s life.

Dr. Lopez-Teijon added: “I think the connection between the two is due to this beautiful love story: the emotion with which Antonio Orozco, who is a very well-known artist, sang for her that day and the love with which her parents decided to have her by means of IVF treatment.

“Of course, Zoe’s parents told her this story and she also experienced this meeting as a very special moment.”

She explained that micro-vibrations produced by music increase the fertilization rate by five percent and improve embryonic development.

She said: “Our scientific studies have demonstrated that music micro-vibrations produce movements similar to those that fertilized eggs experience in their journey through the fallopian tubes and the uterus; they stir the culture medium, achieving a more homogeneous distribution of nutrients and scattering the waste toxic products by preventing their accumulation.”

The expert added: “We analyzed 985 embryos from 114 different patients.

“The oocytes from each patient were divided into two groups, which were cultured in two different incubators: one provided with a loudspeaker system and the other a conventional one.

“The results showed that those cultured with music improved their fertilization rate by 4.8 percent.”

The Institute has received international recognition at universities including Harvard and Oxford, with Dr. Lopez-Teijon adding: “At Institut Marques, we have a constant desire to keep on researching in order to discover the latest scientific and health advances.

“In 2017, we presented our scientific studies on the influence of music on embryonic and fetal development at the Massachusetts Institute of Technology (MIT).

“Because of this research, we have been awarded the Ig Nobel Prize for Medicine, the first one in obstetrics in the 27-year history of the award.

“The MIT session is part of the Ig Nobel Awards Ceremony, which recognizes the most surprising and innovative scientific research of the year.

“This ceremony is held every year at Harvard University and the Massachusetts Institute of Technology, hosting prestigious scientists from around the world to present their studies to the public in a fun and enjoyable way. It represents a recognition for the research of Institut Marques to improve assisted reproduction treatments.”

Dr. Lopez-Teijon, who has a degree in Medicine and Surgery from the Faculty of Medicine of the University of Santiago de Compostela and who specialized in Obstetrics and Gynaecology in Barcelona, where the IVF lab is located, added: “In addition to its use during in vitro fertilization, we have studied the reaction of fetuses when they listen to music from the womb during pregnancy.”

They even use a tiny speaker – called a Babypod – placed inside a mum-to-be’s vagina to check on how music can influence a baby’s development.

Dr. Lopez-Teijon said: “Thanks to the development of a small intravaginal speaker, Babypod, we have discovered that fetuses can hear when they are 16 weeks old and 11 centimeters long, but only if the sound comes directly from the vagina because they can barely hear noise from outside.

“Thousands of women have already used Babypod during their pregnancy. In all cases, fetal deafness was ruled out by the babies’ reaction to hearing music in the womb. We believe that Babypod can prevent laterality and dyslexia, conditions that occur during brain development.

“To this end, we have initiated a study with children who have been exposed to Babypod during their gestation. Later on, we will initiate studies on how it influences the development of their brain maturity.”

Dr. Lopez-Teijon said that she is passionate about music, adding that one of their studies, ‘Foetal facial expression in response to intravaginal music emission’, was “the most downloaded study in Ultrasound, the journal of the British Medical Ultrasound Society (BMUS)”.

It remains unclear if music itself plays a specific role in the development of fetuses or if the micro-vibrations alone deserve the credit, with the director of the institute saying: “In our first study, three different musical styles were chosen – pop, hard rock, and classical music – to measure the possible variations depending on frequency, but no significant differences were detected between one or the other.

“So, we think we could use other kinds of vibrations, although we like to say that ‘life is better with music and so is in vitro fertilization’.”