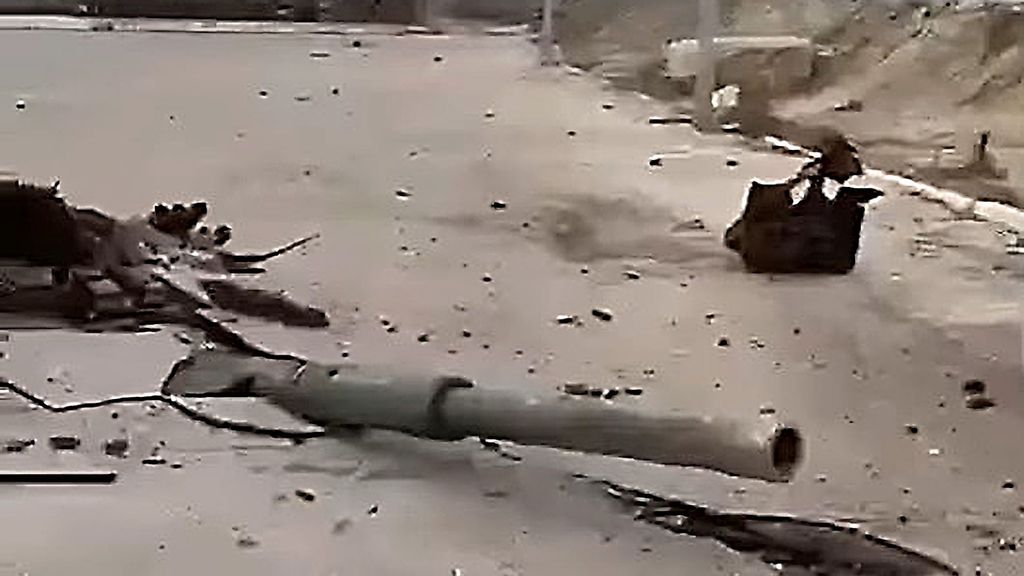 Russian tank crashed to the ground after it was hit by tank-killer missiles in April 2022. (General Staff of the Armed Forces of Ukraine/Zenger).

This is the moment a Ukrainian serviceman films the wreckage of a Russian tank in a car park crater and praises his country’s anti-tank missile systems for keeping the enemy at bay.

The General Staff of the Armed Forces of Ukraine said on the morning of 6th April: “What Javelin and NLAW do to Russian tanks…”

The footage seems to show the entire turret blown from a Russian tank that has then partially buried itself in the tarmac. The process where the top is blown off a tank happens when munitions inside explode and is known as the “Jack In The Box” effect.

The FGM-148 Javelin is a portable anti-tank missile system manufactured by US companies Raytheon and Lockheed Martin.

Successfully used in the Iraq War, the system first arrived in Ukraine in 2018 and has become a symbol of national resistance since Russia launched its invasion of Ukraine on 24th February.

The weapon was developed by SAAB in Sweden and has a range of up to 800 meters. In January 2022, the United Kingdom provided more than 1,000 NLAW portable anti-tank missiles to Ukraine.

The General Staff of the Armed Forces of Ukraine did not reveal where the footage was filmed.

Russian troops invaded Ukraine on 24th February in what the Kremlin is called a “special military operation” to “demilitarise and denazify” the country.

Today marks the 42nd day of the invasion. The General Staff of the Armed Forces of Ukraine reported that from 24th February to 6th April, the total combat losses of Russian troops stand at about 18,600 personnel.

Thousands of people are reported to be fleeing eastern Ukraine as Russia shifts the focus of its attacks to the Donbas region.

After Russian troops withdrew from the north of the country, evidence of alleged war crimes, including the execution of civilians, has emerged from the town of Bucha, which is located close to the capital, Kyiv.

The disturbing footage and accounts from Bucha led Pope Francis to condemn the “massacre” and kiss a Ukrainian flag from the town during his weekly general audience at the Paul VI Hall, in the Vatican, this morning.