The dramatic footage was filmed in Port Charlotte, in Charlotte County, in the early hours of Saturday morning.
By Lee Bullen April 6, 2022
Facebook
Twitter
Linkedin
Email 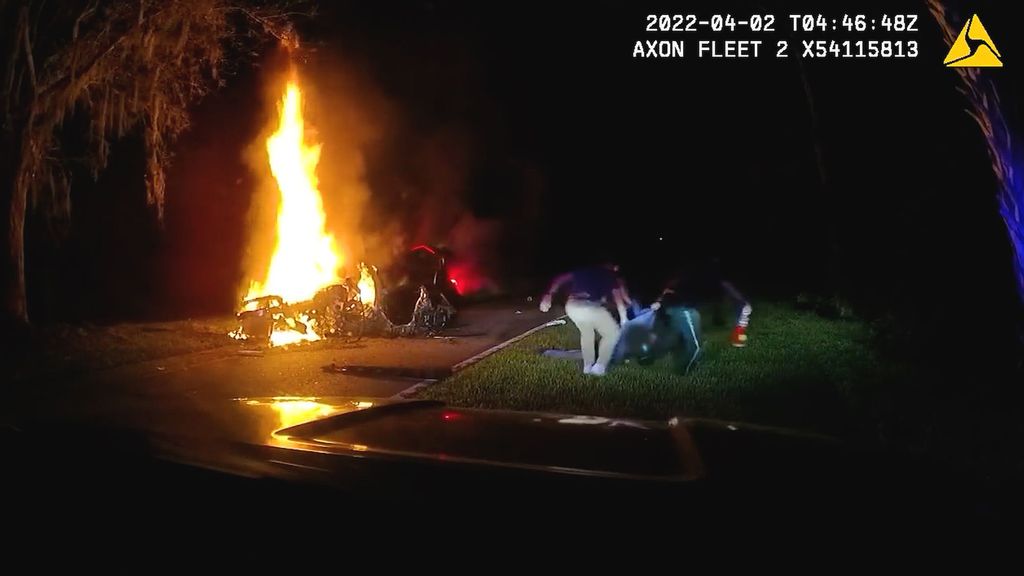 Cool-headed cops cut a driver trapped by his seatbelt free from his car as flames threatened to engulf them.

An astonishing video of the rescue emerged showing flames leaping five feet into the air with the entire engine bay ablaze.

Inside the crashed vehicle, the driver can be heard screaming for help, unable to free himself from his safety harness.

The dramatic footage was filmed in Port Charlotte, in Charlotte County, in the US state of Florida, in the early hours of Saturday morning.

The police were called to the scene after residents heard a loud crash.

Officers on the scene realized the man’s seatbelt was wrapped around his neck and upper body and needed to be cut to pull him free of the flames.

With the help of a fire extinguisher, a pocketknife, and a good-Samaritan passerby, the officers managed to pull the victim free of the burning car.

The police stated: “The victim is still in critical condition but expected to survive.”

“Early Saturday morning, deputies arrived on the scene of a vehicle accident where a man was trapped inside his burning vehicle.

“The neighbors inside the Riverwood community were alerted by the loud crash and called 911.

“The callers described the flames as being five feet high and heard a man screaming for help.

“When DFC Parrish and DFC Vasquez ran to the victim, they found his seatbelt caught around his neck and upper body.

“The heat from the flames was described as unbearable which made it difficult for them to remain close to the victim for long periods of time.

The police added: “Parrish and Vasquez are shown extinguishing the flames to gain access to the man.

“Utilizing a pocketknife, the man was freed and pulled to safety with the help of a Good Samaritan.

“Charlotte County Fire/EMS arrived on scene to provide medical care and transported the victim to a nearby Trauma Unit. The victim is still in critical condition but expected to survive.”

Sheriff Bill Prummell said: “You truly never know what the night will hold.

“The job of a deputy is to act bravely in the face of danger, regardless of what lies ahead. These young men did just that. I couldn’t be prouder.”