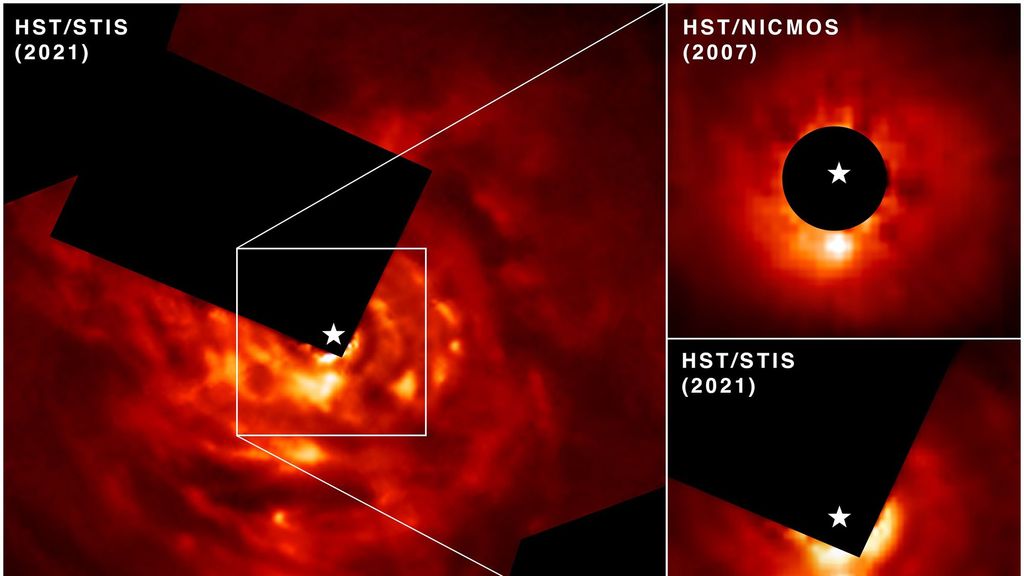 Researchers were able to directly image newly forming exoplanet AB Aurigae b over a 13-year span using Hubble’s Space Telescope Imaging Spectrograph (STIS) and its Near Infrared Camera and Multi-Object Spectrograph (NICMOS). In the top right, Hubble’s NICMOS image captured in 2007 shows AB Aurigae b in a due south position compared to its host star, which is covered by the instrument’s coronagraph. The image captured in 2021 by STIS shows the protoplanet has moved in a counterclockwise motion over time.  (NASA, ESA, Thayne Currie (Subaru Telescope, Eureka Scientific Inc./Zenger )

A massive new planet, nine times the size of Jupiter and almost 12,000 times bigger than Earth, is being formed in an intense and violent process that is challenging understanding about planetary formation.

NASA’s Hubble space telescope recorded the new planet, called AB Aurigae b, which is embedded in a disc of gas and dust spiraling around a young star that is about 2 million years old, according to estimates published in the journal Nature Astronomy.

The star is of the age when our own solar system’s formation was underway, about 4.6 billion years ago.

Thayne Currie of the Subaru Telescope, who led the research appearing in Nature Astronomy, said: “Nature is clever; it can produce planets in a range of different ways.

“We could not detect this motion on the order of a year or two years.

“Hubble provided a time baseline, combined with Subaru data, of 13 years, which was sufficient to be able to detect orbital motion.”

Hubble’s resolution and length of time in space has provided clear photographic evidence of how large planets, such as Jupiter, are formed.

All planets are believed to be composed of material originating in a disc swirling around a central star in a process known as core accretion. This theory holds that planets embedded in such a disc grow gradually from objects ranging in size from grains of dust to boulders that collide and adhere together in orbit. A resulting core then pulls in gases from the disc.

Huge planets, such as Jupiter, which feature swirling gases, have long sparked debate that challenged the dominant theory about planet formation. The disc instability theory contends that as a massive disc cools down around a central star within a swirling disc, gravity causes the disc to break into fragments that become planets.

AB Aurigae b is about nine times bigger than Jupiter, which, in turn, is 1,300 times bigger than Earth. The nascent planet orbits its star approximately 8.6 billion miles away, or about twice the distance Pluto ranges from our Sun.

The astronomers believe that over such distances, planets of Jupiter’s size might not ever develop by core accretion. Therefore, they concluded that disc instability formed the growing proto-planet at such a great distance from the star it orbits.

While Currie was initially sceptical that AB Aurigae b was indeed a planet, images taken by the Subaru Telescope in Hawaii, when combined with archival data provided by Hubble, were decisive in leading him to his ultimate conclusions. He said: “We could not detect this motion on the order of a year or two years.”

Currie added: “Hubble provided a time baseline, combined with Subaru data, of 13 years, which was sufficient to be able to detect orbital motion.”

Co-author Olivier Guyon, of the University of Arizona, said: “AB Aurigae b has now been looked at in multiple wavelengths, and a consistent picture has emerged – one that’s very solid.”

And Alan Boss, of the Carnegie Institution of Science, said: “This new discovery is strong evidence that some gas giant planets can form by the disk instability mechanism.

“In the end, gravity is all that counts, as the leftovers of the star-formation process will end up being pulled together by gravity to form planets, one way or the other.”

While he was not directly involved in the published study, Boss is the author of a 1998 paper that it cited.

Future studies of AB Aurigae b and similar planet-producing discs may reveal their chemical composition by using Hubble and Subaru, as well as NASA’s James Webb Space Telescope.

AB Aurigae b is located in the Auriga constellation and is about 531 light-years from the Sun. It has a mass about 2.4 times that of the Sun and radiates 38 times its luminosity.