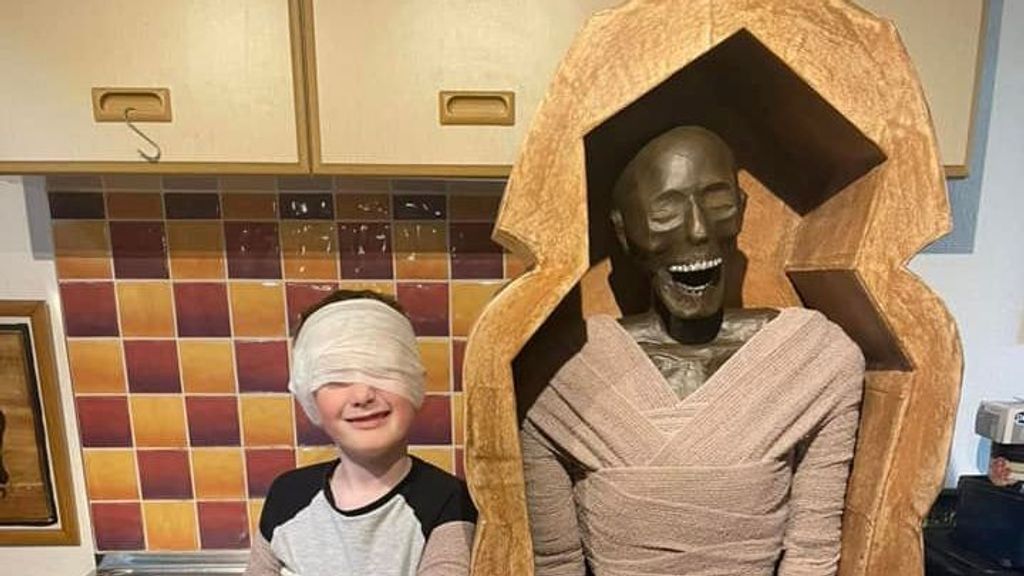 A dad took his son’s ancient Egypt school craft project extremely seriously – and built a life-size sarcophagus complete with a mummified pharaoh for $300.

Richard Brigg, 47, knew he had quite the task when son Alexander, seven, said he’d volunteered for his dad to build a sarcophagus for his Year Three class.

Undeterred, the engineer quickly got to work – and crafted an incredible life-size sarcophagus out of foamboard, polystyrene and paper mache.

His weeks of hard work paid off and the resulting model – complete with a mummified pharaoh inside – was a huge hit with Alexander’s class and his teacher.

Richard, who is the chairman of Moorside Primary School’s Parent-Teacher Association in Lancaster, Lancs., said: “I have a history of making stuff for the PTA so my boy’s teacher asked him in class if he thought I could build one and he came out of school one day with the message to have a chat with her!

“It was a challenge but I thought I could give it a good go, so I went away, had a think and managed to create this in a matter of weeks.

“The school kids were quite excited by it from the feedback I received from the Year Three teaching team when us parents were invited in after school on the museum day.

“The kids were showing it off to the parents and various classes at school went to see it as well as the projects that the Year Three pupils had made.

“It even got quite a bit of attention from the passing children of the school next door as we carried off to the car on Friday – we had to keep stopping on the pavement so Alexander could show them!

“I’m really pleased with how it all came together – it turned out better than expected! I’d definitely do something like this again.”

Tasked with the build in early February, Richard had until the class’ ancient Egypt museum day last Thursday (31/3) to create the sarcophagus and spent weeks perfecting his masterpiece.

After cutting foam board to the shape he wanted, he carefully used a glue gun to stick it together to form the back of the sarcophagus.

Richard then used several layers of polystyrene insulation sheets cut in different profiles to create the front, carving in the intricate details with a hot wire cutter and craft knives.

And he covered both the front and back with paper mache to give it a more durable and harder shell, sealing it with varnish before reaching for the paint.

Richard said: “I looked up the sarcophagus of Tutankhamun for inspiration and a few styling cues to make it at least a little historically accurate for school rather than totally made up.

“The mummified pharaoh inside was a left over Halloween prop which I bulked out with more polystyrene and pipe installation before using paper mache on the head.

“Dying the mummy’s bandages with tea was a failure! Apart from making the whole house stink like a tea merchants, by the time we had washed the smell of tea out them, they were nearly normal color again!”

Richard spent a painstaking 60 hours spread over five to six weeks creating the sarcophagus, getting to work in the evenings when his son had gone to bed.

Dropping off his masterpiece at Moorside Primary School, Richard was thrilled to see his son’s classmates overjoyed with his handiwork and hopes it’ll be used in years to come by the school.

He said: “If I’m honest, it turned out better than I thought!

“So much so, I’ll be offering it to few friends who are teachers and governors at local schools to see if they’d like it when they do ancient Egypt as it seems too good to hide in a cellar for a year.

“It cost about £250 to do but I count the cost as my charity gift to the school and an investment as it’ll get used more than once.

“I’d definitely do it again. I’ll let the teachers come up with the idea for what might inspire or enthuse the pupils that would be a genuine teaching aid and support in whatever way I can.

“I’ll also use it as a plug to encourage parent, grandparent, carer, family involvement and participation with school and PTA.

“So many schools are struggling with tight budgets & resources, I’m sure there are others who are equally and better creatives than I am who could offer support.”