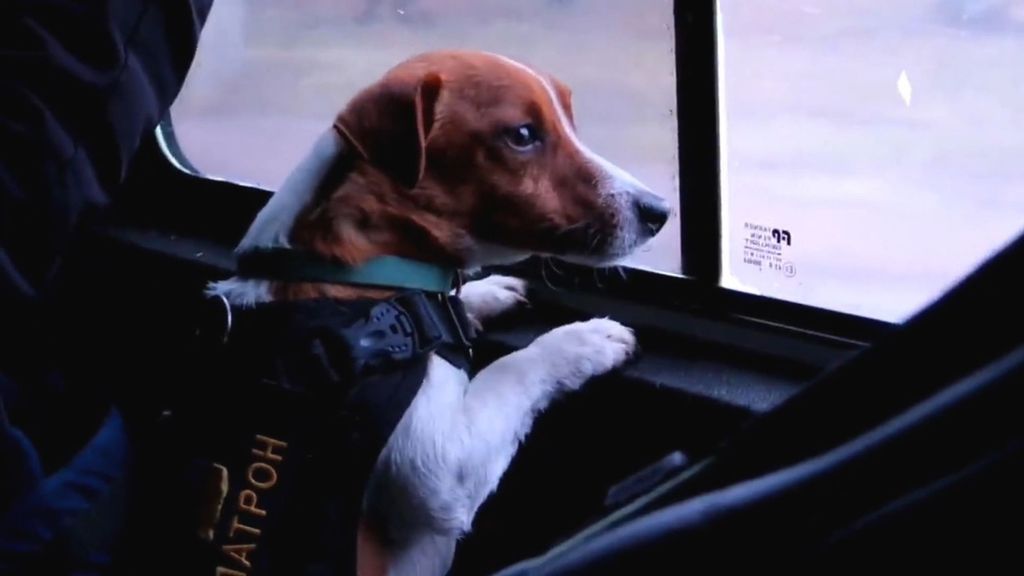 Patron the brave pooch being trained and helps the pyrotechnicians to clean the land of Russian mines in the Chernihiv region in Ukraine. (@SESU_UA/Zenger)

These images show the brave bomb squad dog Patron continuing to help disposal experts in Ukraine to clean up the landmines they call “Russia’s gifts” in exchange for cheese.

The images were filmed in the northern Ukrainian city of Chernihiv as the Ukrainians claim to have liberated further cities from the Russian “invaders”.

Patron’s reward of fresh cheese at the end of the day apparently makes it all worthwhile for the brave Ukrainian sniffer dog.

The two-year-old Jack Russell Terrier is the star landmine finder and mascot of the Chernihiv bomb disposal squad.

The squad confirmed that Patron is its top landmine tracker and has been regularly earning his tasty treat at the end of each day tracking down the explosive devices.

The State Emergency Service (SES) of Ukraine humorously said “Who is a good boy?” before adding that Patron “continues to help pyrotechnicians in the Chernihiv region to clean the land of Russian ‘gifts’.”

The SES added that people should “be aware, look under your feet, and do not upset Patron”.

Zenger News previously obtained other footage from the SES, which is Ukraine’s civil defense and rescue agency, on Saturday, 19th March.

The video was accompanied by the following statement: “News from Patron! Our militant dog – the mascot of Chernihiv pyrotechnicians continues to serve!

“Since the beginning of the war, he and SES sappers have cleared almost 90 explosive devices.

“Thank you, friend, for your tireless work!”

The video shows the adorable pooch hopping onto his human colleague’s lap in the passenger seat of their work car and ends with the diminutive dog in action in the field.

Russia has been widely accused of using weapons against not only soldiers but also civilians in Ukraine since it launched its invasion on 24th February.

«Previous Post
Number Of Birds Living In Tropical Forests ‘Has Plummeted By Up To 90 Per Cent In Just 40 Years’»Next Post
Good Vibrations: IVF Girls Touching Reunion With Singer Who Crooned To Her In Petri Dish