The Houston Police Robbery Division said the incident took place in the city of Houston at around 7.35am on 26th March.
By Lee Bullen April 6, 2022
Facebook
Twitter
Linkedin
Email 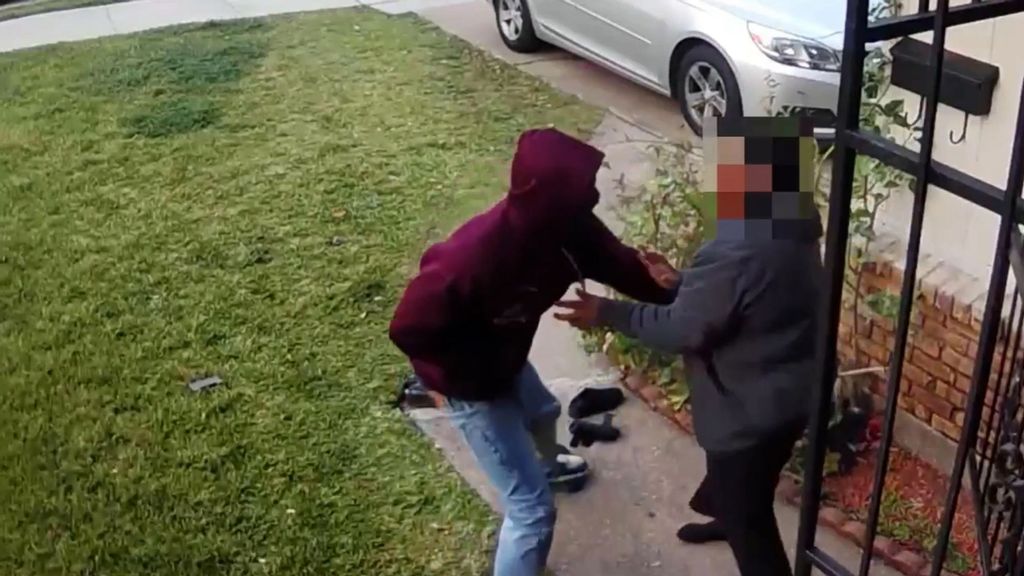 Tonya Robertson Rogers, mother of disabled son, was robbed at gunpoint outside her home on 26th March, in Houston, USA.  (Houston Police Robbery/Zenger).

This is the shocking moment an armed man robs a mother on her doorstep and makes off with almost $5,000 after she cashed a cheque to look after her disabled son.

The Houston Police Robbery Division said the incident took place in the city of Houston, in the US state of Texas, at around 7.35am on 26th March.

The police said in a statement on 4th April: “The Houston Police Department’s Robbery Division needs the public’s assistance identifying the suspect(s) responsible for an aggravated robbery.

“The complainant stated that as she was walking to her front door, a black four-door sedan suddenly stopped in front of her house. An unknown male then exited the passenger seat while armed with a handgun, ran up the complainant, and demanded her money.

“The complainant then threw everything that she was holding towards the suspect. The suspect then searched the complainant’s pockets before picking up her purse, running back to the vehicle, and then fleeing the scene.”

The police described the suspect as a black male, 5’8″ to 6′, who was wearing a maroon hoodie, blue jeans, and white shoes.

The vehicle was identified as a “black four-door sedan, possibly a Hyundai Elantra”.

The police added: “Please contact Crime Stoppers of Houston directly if you have any information related to this investigation.

“Information leading to the charging and/or arrest of any felony suspects may result in a cash payment up to USD 5,000. Tipsters must contact Crime Stoppers directly to remain anonymous and to be considered for a cash payment.”

The victim, identified as Tonya Robertson, 53, said the thief made off with USD 3,900 [GBP 2,980] after she cashed her income tax cheque to use for her son, who is confined to a wheelchair.

To help cover costs, Robertson launched a GoFundMe campaign on 5th April with the message: “Hi My Name is Tonya, I was robbed getting off from work at 7 am that morning and a small dark color car pulled up on me, they took everything I had.

“That could have been anybody’s mother or grandma, I just had a heart attack and I also have stints on my heart these people need to be off these streets!”