Water Hero: Cops Save Mum And Babies From Car In Freezing Pond

Vehicle had lost control on Donaldson Avenue and went off the road through trees and a fence, in Anne Arundel County.
By Lee Bullen April 5, 2022
Facebook
Twitter
Linkedin
Email 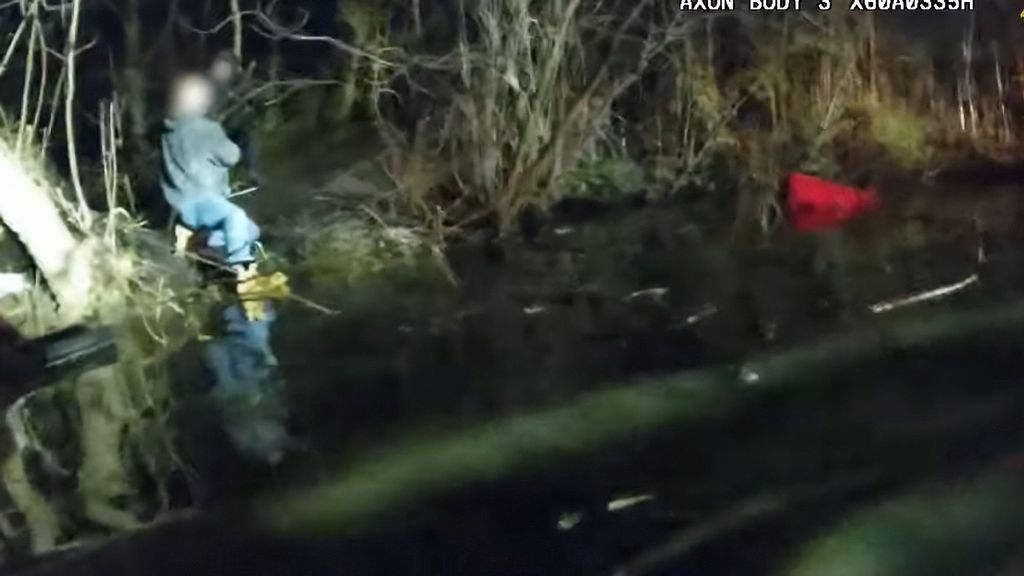 Four people, including 9-month-old and 3-year-old child were rescued from a vehicle in a drainage pond near Severn-Danza Park in April 2022. (Anne Arundel County Police Department/Zenger).

A trapped young family was plucked from a submerged car by hero cops after an unlicensed driver plunged into a freezing lake.

The incident took place at Severn-Danza Park, in Anne Arundel County, in the US state of Maryland, at around 9.15 pm on Friday, 1st April.

Police said an officer was patrolling the area when he heard the family’s car crash through a fence before ending up semi-submerged in the drainage pool.

Realizing there were a baby and a frightened toddler inside the car, officers moved quickly to remove them and take them to safety.

In the footage, officers are seen standing in the water around the semi-submerged car as they shine their torches inside to check on the family.

The cops smash the vehicle’s windows and one officer says “there are two babies” before instructing the mother to “give me the baby”.

The officer takes the toddler to a helper on the bank before returning to the car.

Meanwhile, another cop carries the baby to safety as his colleague returns to help the parents in the partially-submerged car.

The mother is heard sobbing as she wades through the cold water to the bank, where her two children are waiting.

The Anne Arundel County Police Department (AACPD) said in a statement on the 4th April: “On Friday, April 1st at approximately 9:15 p.m. an officer was on patrol in Severn-Danza Park when he heard a crash in his immediate vicinity.

“He discovered a vehicle had lost control on Donaldson Avenue and went off the road through trees and a fence before becoming half-submerged in a drainage pond in the park.

“The vehicle was taking on water with occupants trapped inside. The supervisor and an officer, without hesitation, leaped into action to conduct a rescue of the four occupants, including a 9-month-old and 3-year-old child.”

Body-cam footage shows the officers smashing through the vehicle’s windows to get to the trapped family.

The AACPD stated: “Officers carried the children to safety and returned to rescue the adults. Aside from being cold and wet, everyone involved was unharmed.

“The unlicensed driver was arrested due to outstanding warrants.”

The driver has been named as Oswaldo Ramirez-Lopez, 27, from the town of Glen Burnie, in Maryland.

The police investigation into the incident is ongoing.