Kids Targeted: One Child Dead And 66 Injured In Shelling In Kids Hospital In Besieged Mykolaiv 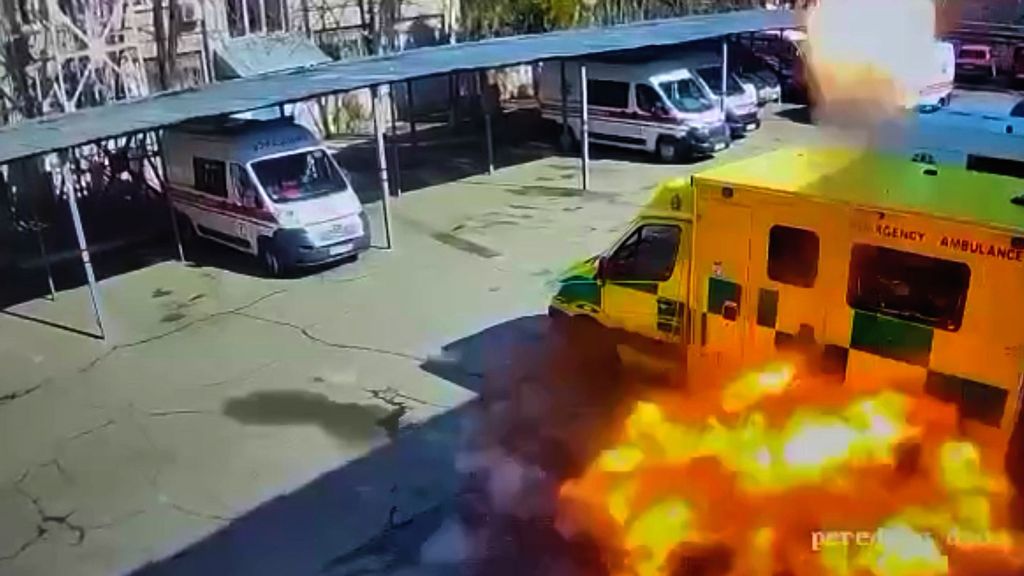 The shelling of a children's hospital in Mykolaiv in Ukraine on the 4th of April 2022.  (@mykolaivskaODA/Zenger)

The governor of Ukraine’s Mykolaiv province has released these images reportedly showing ambulances being hit at a children’s hospital in a series of attacks that killed a child and injured 66 others, including other kids.

The CCTV images show a group of tanks parked in front of the hospital before there is an explosion and the yellowambulance at the forefront of the footage is hit.

The provincial governor also released this photograph reportedly showing a robot figurine on the hospital grounds, which appears to be there for the amusement of the sick kids and near which a projectile reportedly landed.

Governor of Mykolaiv Oblast Vitaliy Kim, 41, sarcastically commented: “And then they were aiming at a super-modern robot on the territory of the hospital.”

The CCTV footage Zenger News obtained from Kim reportedly shows the moment the regional children’s hospital in the provincial capital, Mykolaiv, was shelled by Russian forces, on 4th April.

The images were also carried by the General Staff of the Armed Forces of Ukraine, who also said that the attacks happened on 4th April and that a children’s hospital had been hit.

And the head of the Mykolaiv Regional Council, Anna Zamazeeva, said on 5th April that the images showed “yesterday’s attack on a secret medical facility – an ambulance substation”.

She added: “The Russian occupiers yesterday again ‘chaotically’ fired rockets at Mykolaiv and Ochakov. But for some reason, most of the rockets flew to the area of &ZeroWidthSpace;&ZeroWidthSpace;hospitals, schools, nursery schools and residential areas…

“Another child, unfortunately, died during the evening shelling. Sincere condolences to family and friends! We will never forgive the ‘Russian world’ for the suffering and death of our children! You will answer for everything!”

Kim, whose father is of Korean ancestry, has been the Governor of Mykolaiv Oblast since 2020.

The Battle of Mykolaiv began on the night of 26th February and is still ongoing. The city a strategically important shipbuilding centre on the Black Sea and Russian forces have been trying to take it, as it lies en route to Odesa, which holds important status in Russian culture and history and is believed to be coveted by the Kremlin.