The explorer - identified as Juliette who runs the 'Juj' Urbex' channel on YouTube became a massive hit with her aquarium footage.
By Joseph Golder April 5, 2022
Facebook
Twitter
Linkedin
Email 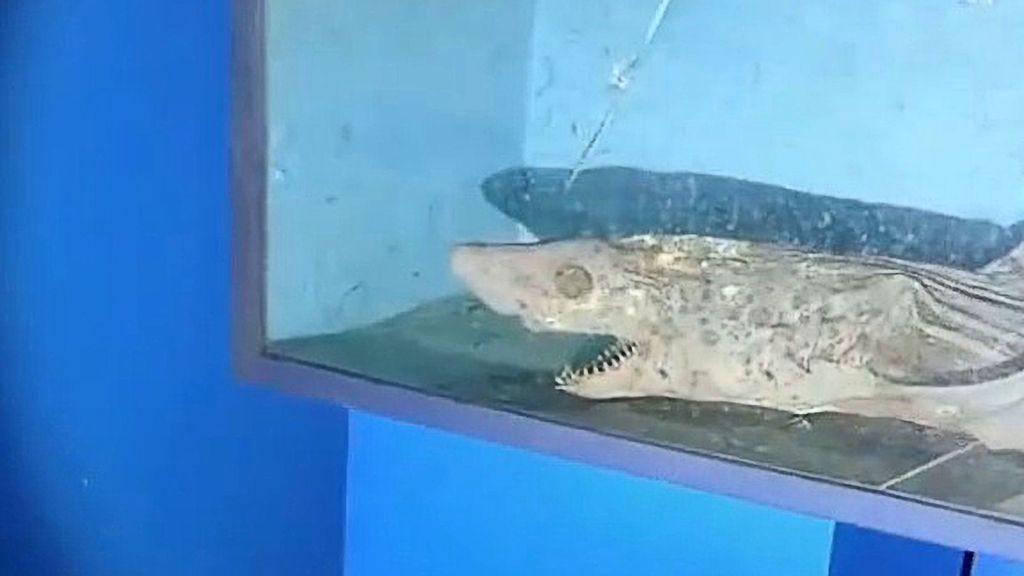 Urban explorer Juju finds an abandoned restaurant on the border between Spain and France, in January, 2022. (@juju_urbex/Zenger)

An urban explorer who went viral with her discovery of a creepy abandoned aquarium has revealed how her hobby comes with hazards ranging from armed criminals that use the hidden spaces as drug dens through to kinky couples who seek out derelict buildings for sex.

The explorer – identified only as Juliette – scored a viral hit with a gruesome mummified shark found in the once-thriving marine park.

But she says some of the scariest sights she has encountered are the drug dealers, armed crooks and perverts who seek out abandoned buildings for sex.

The 24-year-old woman quit her job to work full-time on her urban explorer social media presence in 2021.

She runs the ‘Juj’ Urbex’ channel on YouTube and also posts on Instagram. She became a massive hit with her aquarium footage showing a ghostly dead shark and a weirdly shriveled squid.

But in new footage, she has revealed she has had other less natural encounters, including dead stray animals and used condoms, which she filmed for her followers.

Juliette, who is from the south-eastern French city of Lyon, in France’s Auvergne-Rhone-Alpes region, told Zenger News that she loves “going in search of the history of the place, and the adventure of course”.

She also vowed to keep the venue’s address secret, saying: “When the addresses of abandoned places are revealed, the place becomes known, and ill-intentioned people such as thugs, thieves, and taggers will come and break everything.

“That’s why urban explorers never give the addresses, it’s to preserve the places.”

The footage – which comes with a ‘not for the faint of heart’ warning (“Ames sensibles s’abstenir” in French) – shows Juliette discovering the aquarium and filming its contents, and also an abandoned nightclub she had visited that was closed after a flood left the owners bankrupt.

Juliette, who has more than 83,000 followers on Instagram, has become increasingly involved in urban exploring since finishing her studies in 2018.

She can be seen wearing a beanie with a radioactive symbol, perhaps in tribute to a previous trip she made to Chernobyl, in Ukraine, in November 2021.

She is also filmed taking a sniff from a suspect-looking glass, causing her to immediately start coughing.

The footage ends with Juliette filming what appears to be a used condom next to a wrapper, with her saying that she often comes across “really disgusting things”.

She can be heard saying “yuck” as the footage ends.

She also warned people against becoming urban explorers themselves, saying: “The places are often protected by the authorities, guards, cameras, that’s why it’s a prohibited practice.

“You have to be very careful and discreet.”

Juliette said she went to the Chernobyl nuclear exclusion zone, in Ukraine, in November 2021 – a few months before Russia invaded the country and allegedly shot at the nuclear plant with a tank – adding that she had made a 90-minute film of her adventures there.

Much of it can be viewed on her YouTube channel, although she did provide Zenger News with these stunning photographs, which also show her wearing her trademark radioactive beanie.