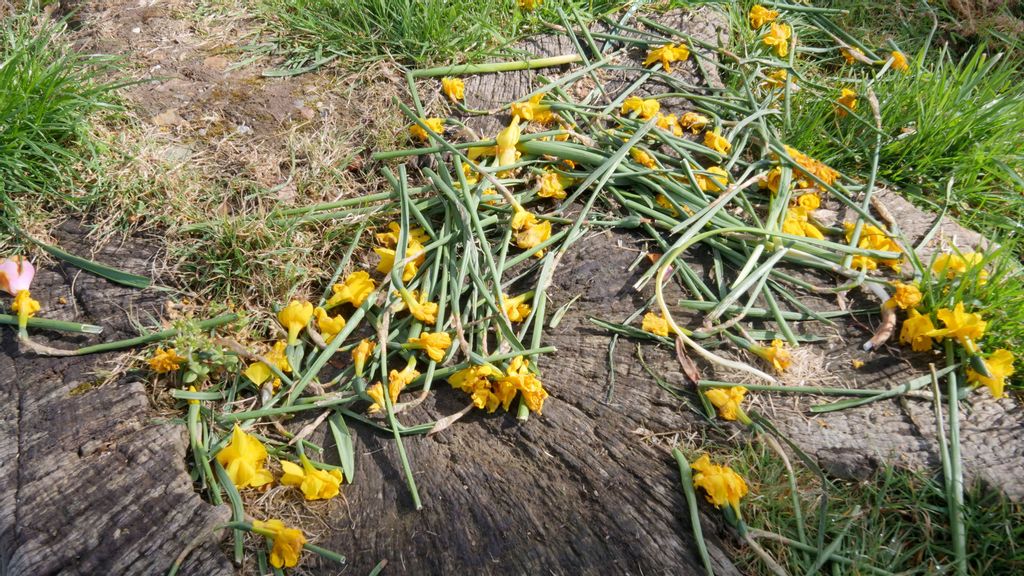 A council has been branded 'bonkers' for cutting down daffodils in 'Daffodil Walk' claiming they are poisonous - and can give kids diarrhoea if they EAT them.  (Jon Mills/Zenger)

A council has been branded ‘bonkers’ for cutting down daffodils in ‘Daffodil Walk’ claiming they are poisonous – and can give kids diarrhea if they EAT them.

Locals say St Blaise Town Council in Cornwall cut down over 1,000 daffs at the Old Roselyn Play Area – over health and safety fears.

The council says the flowers can be ‘poisonous’ – with experts saying they can give anyone who eats them the runs.

The council says it will not plant new daffodil bulbs for the foreseeable future for the same reason – they can be toxic.

But locals have branded the decision ‘crazy’ ‘bewildering’ and ‘totally bonkers”.

They say last month during the mini heatwave the park ”looked beautiful in yellow in the golden sunshine”.

Part of the park is normally so populated with flowers it has been nicknamed ”Daffodil Walk”.

A spokesman said: “After recent play inspection training we were advised not to have daffodils in play areas as all parts of the daffodil can be poisonous.

”I brought this to the attention of the town council who said no more daffs should be planted but those that were there before the land was devolved to us would stay.

”The daffs are sporadic over a grassed area and once the flowers have died the grass will be cut.”

A spokesman for Roselyn Play Park Committee said it was ”preposterous”.

He said: “Are they going to put signs up saying don’t eat the daffodils next? This is totally bonkers.

”There have always been daffs in the park. It used to be an old orchard and there must have been about 1,000 flowers.

”Most of them have now been cut down. And to say that it’s because they are toxic to children if they eat them is crazy.”

A spokesman for South West Health Protection Unit did confirm the toxicity of daffodils.

They said: “Daffodils are toxic and severe vomiting and diarrhea can occur if eaten by mistake.

”Although very unpleasant, most people will recover fully without treatment.”

: Locals took to social media to express their anger.

One said: ”When I was in primary school every year we were given a daffodil bulb to grow, we got certificates for the best.

”’Funny I don’t remember trying to eat them or anyone being poisoned.

”This should be in the hands of the police, sheer vandalism, sack whoever made this bonkers decision.”

Another said: ”Probably best everyone just stays indoors from now on then, with mittens on to stop them trying to pick any potential poisonous objects up 🙄.”

Another added: ”This is the most ridiculous action from a town council I’ve ever heard of.

”Let’s get rid of all the bees and wasps, let’s make sure no one ever gets stung by a stinging nettle, let’s cut down all trees.”

But one added: ”Daffodils are also poisonous to dogs, even my mutt has the common sense not to eat them.”

Another local posted: ”What an absolutely idiotic thing to do.

”Let’s not help our wildlife and just kill the human race in that way.
Someone needs sacking 😡.”