The arrest took place in the city of Bunnell in Flagler County in the US state of Florida on Friday 1st April.
By Darko Manevski April 5, 2022
Facebook
Twitter
Linkedin
Email 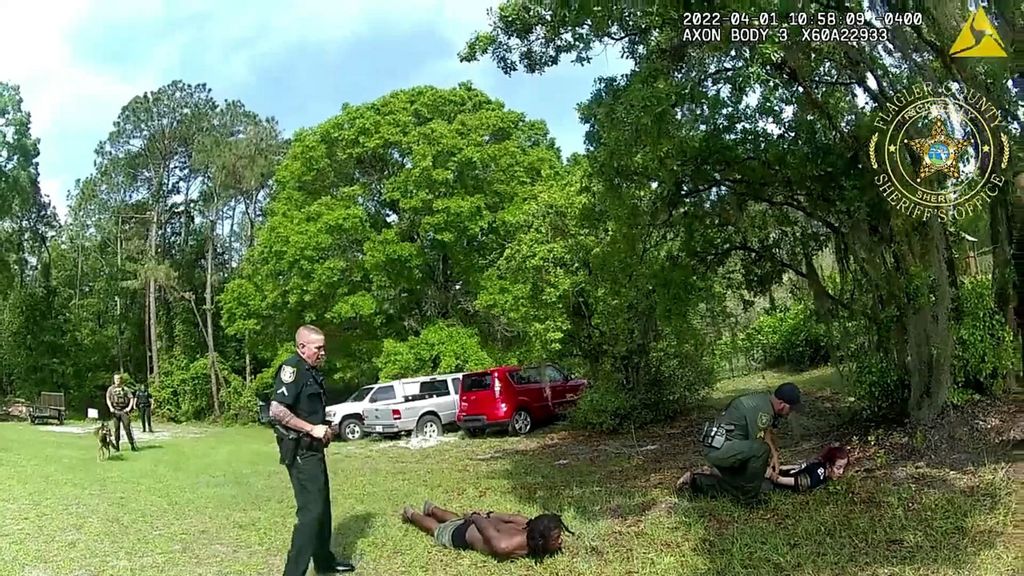 A pair of husband and wife car crooks were seized by police trying to hide in woodlands after crashing a stolen pick up truck.

The arrest took place in the city of Bunnell in Flagler County in the US state of Florida on Friday 1st April.

The couple claimed they had been trying to return the vehicle after pink-haired Brooke Moore, 27, had taken it in panic after an alleged assault.

But police listed a string of car theft, drugs and burglary convictions clocked up by the couple.

A police statement on 4th April: “A busy Friday for the Flagler County Sheriff’s Office (FCSO) leads deputies on a pursuit of a stolen vehicle with two felons crashing the truck and fleeing into the woods.

“Randy Moore, 28, his sidekick, Brooke Moore, 27, are now residing at the Green Roof Inn after a joyride in a stolen vehicle from Volusia County and making the mistake of coming into Flagler.

“Deputies were notified of the Be-On-The-Lookout (BOLO) for a silver Tacoma reported stolen from Volusia County and were able to successfully track it in the area of State Road 100.

“A traffic stop was attempted and the driver fled recklessly losing control of the vehicle several times.

Police Department, but the vehicle continued northbound on US-1, ultimately running off the roadway and crashing after the driver lost control of the vehicle.

“The occupants fled on foot into the woods behind Builders FirstSource lumberyard in Bunnell.

“A joint effort from FCSO deputies, K9 and FireFlight led to the subjects who were ultimately tracked down by an FCSO K9 in the Sawmill Estates Subdivision in Bunnell. They were secured without further incident.

The police stated: “Brooke Moore claimed she and another female were picked up by an unknown male in the vehicle the previous day, taken back to his residence and he attempted to have sexual relations with them.

“She claimed that’s when the other female hit the male over the head with a bottle and requested he take both females back to where he picked them up. The male refused and Brooke found the keys to the truck, drove to pick up Randy and told him the story.

“The couple slept in the vehicle overnight. Randy advised the following morning that they were in the process of returning the vehicle to the owner in Ormond Beach but ended up in Flagler County.”

“Brooke has two prior felony convictions and has a criminal history with multiple drug-related charges.”

Sheriff Rick Staly said: “Another couple of felons thought it was a good idea to steal a vehicle and drive recklessly through our county.

“I’m glad no one was hurt during the apprehension of the stolen vehicle and that deputies were able to safely arrest them. I’d like to thank Volusia County Sheriff’s Office and Bunnell Police Department for assisting in this case.

“Here’s a reminder to criminals that law enforcement agencies work together to ensure criminals are arrested!

“The Moore’s are now being held at the Green Roof Inn facing charges of Grand Theft of a Motor Vehicle, Resist Officer without Violence, and Possession of Drug Paraphernalia. Additionally, Brooke is being charged for Reckless Driving with Damage to Person/Property, Driving While License Suspended with Knowledge, Flee and Elude and Crash-Damage to Vehicle.