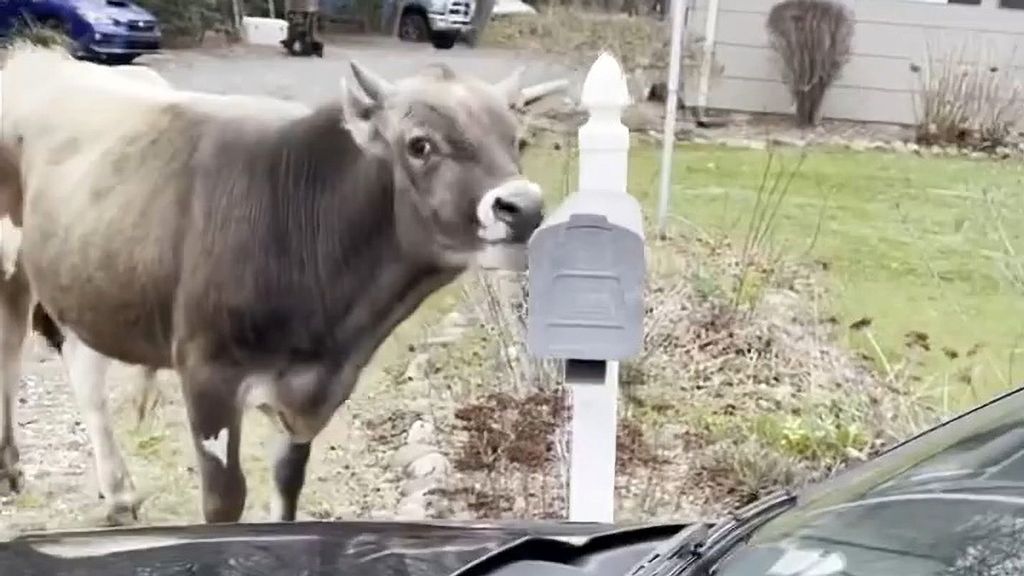 A bull escaped his home and took out a mailbox before being apprehended and returned by police, in Stafford Township, USA, on 30th March. (StaffordTownshipPoliceDepartment/Zenger)

Cops thought they’d been given a bum steer when they were ordered to round up a rampant bull attacking a post box.

But the astonished officer found the year-old bullock battering the box outside a home in Stafford Township, Ocean County, New Jersey, USA.

Zenger News obtained the images and a statement from the Stafford Township Police Department in which it seemed to see the funny side of things and, visibly milking it, said: “Officer Pascale was not amooooosed when he got dispatched to this call on Hilliard Ave today.”

The escaped bull, according to Stafford Township Police Captain Jim Vaughn, had bolted from a farm along with some pigs and a goat through an open gate.

The footage begins with the young bull nudging the mailbox with its horns.

The video, which appears to have been filmed from the police officer’s body cam, shows the bull focusing its rage on the mailbox, as the officer, on the other side of his police vehicle, is apparently taking stock of the situation as he chuckles.

Officer Pascale, whose first name and age were not revealed, can then be heard saying: “I’m standing by, that’s all.”

The steer looks up at him, but it quickly turns its attention back to the offending mailbox, giving it a quick lick before continuing to butt it with its horns.

After a particularly forceful nudge, the mailbox is uprooted and the bull steps back triumphantly, with the letterbox balanced atop one of its horns.

It then lowers its head and the mailbox falls to the ground.

Speaking with his colleagues over the radio, the officer can then be heard saying, as he laughs: “OK. She’s busy assaulting a mailbox right now!”

The bull, meanwhile, prances off-screen after giving the mailbox a few more nudges, apparently satisfied that it had received enough punishment for one day.

Apparently, under the impression that the beefy bovine jerking the mailbox around and later identified as a roughly one-year-old bull, was a cow, he then says “Moo! Moo cow” while following the animal across a lawn in someone’s – presumably the owner of the late mailbox’s – front garden as the footage ends.

It is unclear what the poor mailbox did to deserve such wanton violence, but it is understood that the police did not let the bull, who is reportedly called Baby Cow, make a laughing stock of them and it was later returned to its owner, who has not been named after animal control arrived on the scene.

«Previous Post
Pit Of A Genius: Pit Bull Bando Can Rap, Use The Loo And Escape From Any Container»Next Post
Over Half Of Americans Prefer Walking Over Any Other Mode Of Transportation