VIDEO: Heating Up: Scientists Race To Find Cause Of Alarming Polar Heatwave

Three research aircraft are being deployed to obtain data on air masses in the region to aid prediction models for the Arctic.
By Georgina Jadikovskaall April 1, 2022
Facebook
Twitter
Linkedin
Email 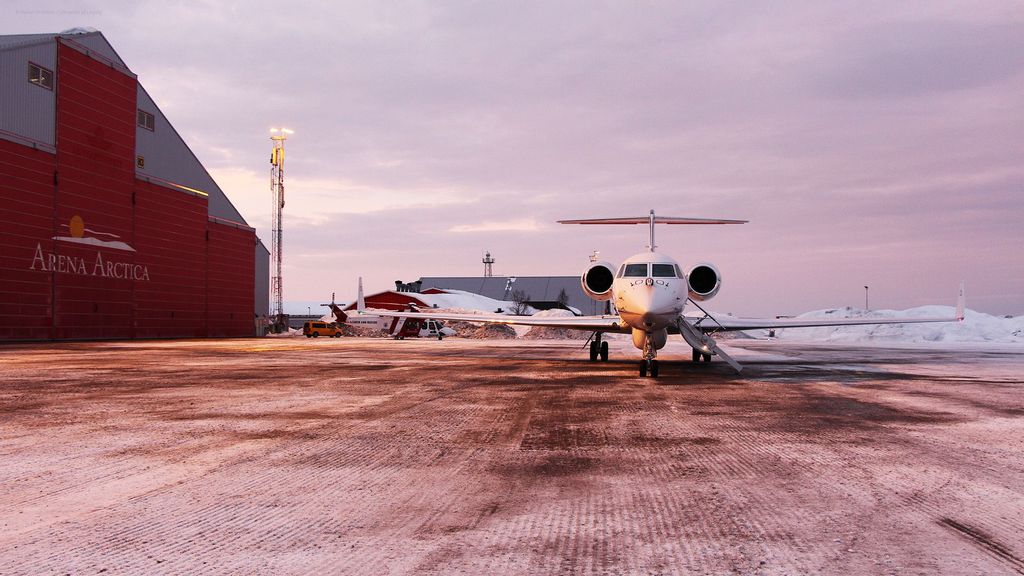 HALO, one of the three research aircraft being used in the HALO-(AC)3 campaign in March 2022, in front of Arena Arctica in Kiruna, Sweden. (Marlen Bruckner-University Leipzig/Zenger)

An international research campaign involving over 100 scientists from 12 countries has begun investigating the dramatic warming in the Arctic — at an estimated rise of two to three degrees Celsius, or about 3.5 to 5.5 degrees Fahrenheit — over the last 50 years.

The campaign, named HALO-(AC)3, is a joint research project by leading research institutes in Germany and abroad. The name “HALO” references the High-Altitude Long-Range research aircraft utilized by the campaign.

As reported by the Max Planck Institutes of Meteorology and Chemistry, the scientists will analyze warm air intrusions and cold air outbreaks reaching into the central Arctic and focus on investigating the processes causing the above-average increase in temperatures in Earth’s northernmost region in mid-March.

Data obtained over the past five decades shows a two-to-three-degree-Celsius increase in temperature, well above the warming observed in other regions.

Referring to this near-surface air temperature change over the Arctic relative to lower latitudes as the Arctic amplification (AA), the Max Planck Institute said that HALO-(AC)3’s research aims to collect knowledge for a better understanding of the dramatic warming over the past decades.

The effects of the temperature rise are not limited to the Arctic’s climate system but are also suspected to modify the regional weather in the mid-latitudes, according to sources at the institutes.

Manfred Wendisch from the Institute for Meteorology at Leipzig University and the scientific coordinator behind the five-week HALO-(AC)3 measuring campaign revealed that three special research aircraft will be used to observe changes in air masses.

These three aircraft — HALO, Polar 5 and Polar 6 — are operated by the German Aerospace Center (DLR), headquartered in the city of Cologne in Germany.

“HALO will operate at higher altitudes as a remote sensing platform, as it is capable of covering distances of up to 10,000 kilometers [6,213 miles] at altitudes of up to 15 kilometers [49,212 feet],” said Andreas Minikin of the DLR Flight Experiments facility.

Polar 5 and 6, which have been used for more than 10 years by the Alfred Wegener Institute Helmholtz Center for Polar and Marine Research (AWI) in the Arctic, will complement HALO by obtaining measurements at altitudes under 19,600 feet (six kilometers).

The Max Planck Institute said that HALO will be based in the Swedish town of Kiruna from March 11 to April 15, while Polar 5 and 6 will operate out of the world’s northernmost settlement in Longyearbyen, located in the Svalbard archipelago in Norway, between March 19 and April 13.

They will cover part of the Fram Strait and areas around Svalbard in the northern Arctic Ocean.

“Although the polar aircraft have a shorter range, they have the major advantage of being able to fly ‘low and slow,’ so they can capture snapshots of very specific processes taking place in, below and above clouds and in the planetary boundary layer,” said Andreas Herber, AWI researcher and coordinator for Polar 5 and 6.

Using the quasi-Lagrangian observation method, the scientists will adapt each flight pattern to the direction of movement of the relevant air mass, enabling shifts in cloud cover, humidity, temperature and many other parameters to be measured directly.

Finally, through the use of numerical weather-forecasting models, the researchers will assess the obtained data and make predictions for the Arctic climate.

“Predicting the future of the Arctic climate remains a challenge. We want to carry out an extensive flight campaign — HALO-(AC)3 — that uses innovative observation methods to help reduce major uncertainties in the projection of future climate development in the Arctic,” said Wendisch.

“By coordinating the flight patterns of the three aircraft, we can track the air masses as they evolve in space and time.

“These measurements make it possible to take a closer look at the smallest cloud structures, all the way down to individual cloud particles, and to investigate the effect of Arctic sea ice on cloud properties. By combining various measurements, we will be able to obtain an almost complete picture of the air masses under investigation,” said Susanne Crewell, an atmospheric researcher at the University of Cologne.

In addition, the Leibniz Institute for Tropospheric Research and Leipzig University will conduct simultaneous profile assessments using a tethered balloon at the AWI research station AWIPEV near the town of Ny-Alesund, located in Svalbard.

Aside from meteorological measurements, the balloon will examine small-scale exchange processes, radiation and aerosol parameters from the ground up to a height of 3,280 feet (one kilometer).

The balloon measurements at the AWIPEV station are planned over an additional period of approximately eight weeks between mid-March and mid-May.

«Previous Post
Astronomers Discover ‘Geological Wonderland’ On Pluto»Next Post
Scent Back: 18th-Century Perfume Could Return As German Scientists Recreate Smells From The Past