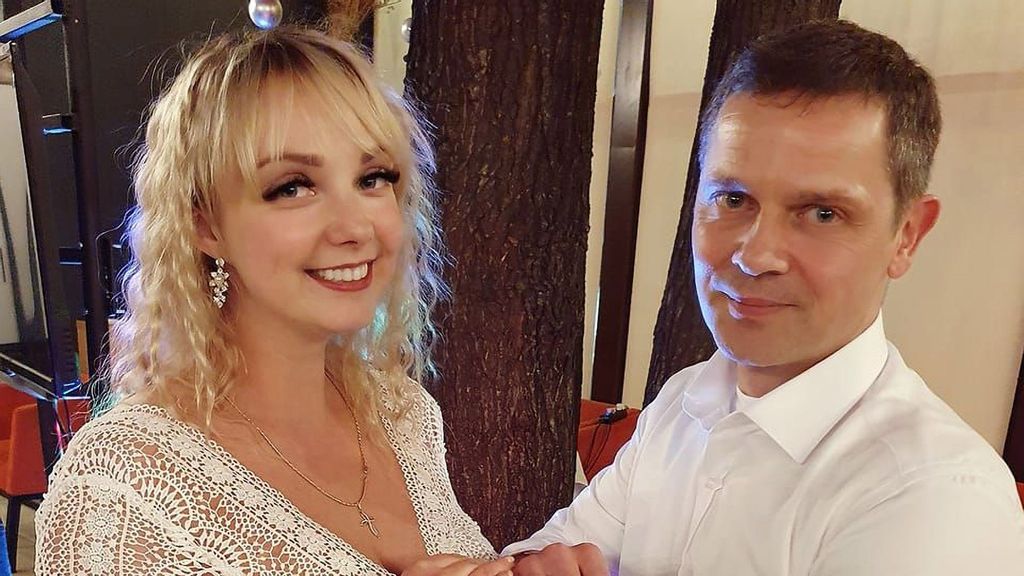 German firefighter Steve Meiling, 42, and his wife Anna Meiling, aged 33, who he was trying to rescue when he was hit by a projectile when travelling to the Ukraine. (Anna Meiling/Zenger)

A German firefighter who rescued his Ukrainian wife from Kyiv and ended up with Russian shell shrapnel in his skull says he is “on the mend”.

Hero Steve Meiling, 42 – from Borna, in the eastern German state of Saxony – was working a night shift at a BMW factory in Germany on the night of Thursday, 24th February, hours after Russian President Vladimir Putin launched his invasion of Ukraine.

He left Germany a few hours later to rescue his wife Anna, 33, from the Ukrainian capital, Kyiv.

After the pair tied the knot in January, she was delayed in her homeland along with her 13-year-old son, Sascha, by visa red tape and a language course she needed to complete.

The couple had planned to meet up again in April after Anna had completed her course and obtained her visa, but Putin’s war changed everything.

Meiling said: “Two hundred kilometers from my destination, I suddenly saw the war. Black clouds of smoke were in the sky, soldiers and tanks were in the streets.”

The German citizen came under fire just 30 kilometers (19 miles) from Kyiv, in the settlement of Borodyanka, which is near the now infamous city of Irpin, with two Russian shells exploding next to his car.

He said: “I ended up in the ditch, I could hardly hear anything.”

Seriously injured and with blood all over his face, Meiling said that “in that moment, I didn’t even know what had hit me”.

He said that he could tell that his head had been hit, “but I didn’t know what it was”.

He added: “And because of the trauma from the explosion, one could only hear everything from afar.

“I saw everything in slow motion. And then there was actually a moment when I wanted to pick up the phone to call my wife and tell her that I love her.”

The firefighter said: “A few minutes later, realizing there was a lot of blood running down my face, I felt it myself with my hand and found no holes on my head.

“Then I thought, if that had been a headshot, I wouldn’t be conscious now. And then I said to myself, ‘pull yourself together, you have to get out of here’. So I sat down next to the car, waited a bit, and went to a residential area.”

He says he wandered through a forest until he reached a residential area and added that he was immediately treated at the first house he arrived at by a woman there.

He said: “The people there were very helpful. A woman treated me right away and then an ambulance was called.

“In the hospital itself, there was great skepticism at first. I am not Ukrainian. I could have been a spy. That’s why my IDs were checked very carefully. After a while, the mistrust disappeared.”

Meiling said: “After a few days, a senior doctor found out that the Russian flag was to be hoisted on the hospital roof. And because nobody knew what would happen to the doctors and patients, I fled with the Ukrainian doctor who was treating me.”

He added: “We fled to the next village. We stayed with a man there for two days and then went from there to my doctor’s weekend home in Vinnytsia.”

Anna, who was hiding with her family in Kyiv, told Zenger News in an exclusive interview shortly after her husband was injured: “As soon as my husband found out that the Russians were attacking us, he decided to come and take me and the child to his home.”

She added: “We had prepared all the papers shortly before departure for our return [to Germany] via Poland.”

Anna also said at the time: “He came under fire 30 kilometers before reaching me. His mobile phone and car were destroyed in the attack, and now we are in different cities.

“He is in Borodyanka, and I am with my family in Kyiv, since we do not have the opportunity to leave.”

It was out of the question for the German firefighter that he would leave Ukraine without Anna.

He said: “For me it was clear that I would not cross the border without her. We then phoned. She knew now that west or southwest, the road to Vinnytsia was the only one that was still passable. And she actually made it to Vinnytsia with her mother and her son via this road.”

The firefighter said: “When I saw her again, there were tears of joy. I was relieved that we made it.”

He added: “And now her mother, her aunt, her sister, and her son also living with us.”

Meiling reached Poland with his wife, Anna, and her son, Sascha.

Now back in Germany, the firefighter added that they were not able to “settle down” because Anna’s grandparents are still in Ukraine, including her ailing, 87-year-old grandmother.

Meiling is now out of the woods, but there are still shrapnel fragments from the Russian shells left embedded in his head, including in his right eye, and he needs regular checks, with the lead levels in his body monitored closely by doctors in Germany.

He explained that he was used to dealing with stressful situations thanks to his experience as a firefighter, but he also said, speaking of his experience of being hospitalized in Ukraine while it was being invaded by Russian soldiers: “The nights in the hospital were the worst because you didn’t know when the next attack would come when you’d have to go back to the basement.

“The hospital was also shot at. Thank God I don’t have any sleeping problems here at home.”

He added that his wife is “a bit traumatized”, but is doing much better now that she is in Germany.

Meiling also said that he was well aware of the risks that he took, but he said: “Of course, I also thought about what other people say. But in the end, you get past it.

“Whether family or friends, they were not in my situation.

“For me, it was the only right thing to do in this situation. And I would do it again, anytime.

“The risk is clear. You drive into a war zone, and you hope nothing happens. There’s no other way to say it: you just hope. And now it is done.”