Russian tank is seen firing from its cannon, and it is then seen being blown to pieces by Ukrainian defenders.
By Lee Bullen April 1, 2022
Facebook
Twitter
Linkedin
Email 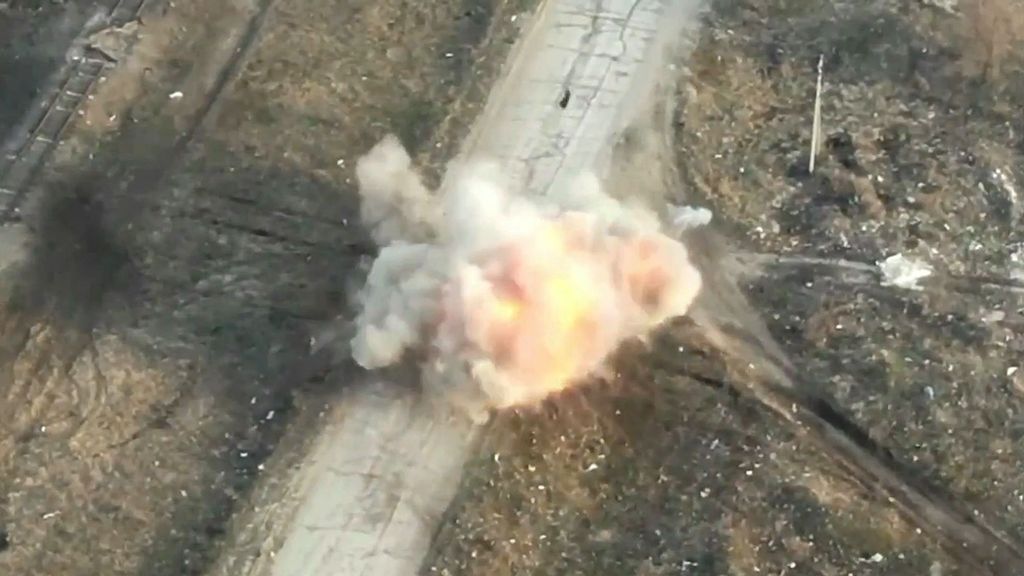 Ukrainian forces have released footage of a Russian tank being blown to smithereens in a devastating showdown in the war-ravaged country.

The drone footage emerged from the eastern Ukrainian region of Luhansk Oblast, after it was deployed by Ukrainian defenders for battlefield observation.

The 4th Rapid Reaction Brigade of the National Guard of Ukraine said on 30th March: “We are destroying the occupier in an area of environmental protection in the region of Luhansk Oblast.

“Our lions are efficient and professional, our methods are true military accuracy. To victory!”

In the footage, the Russian tank is seen firing from its cannon before the scene cuts, and it is then seen being blown to pieces by Ukrainian defenders.

It is unclear if the armoured vehicle was hit by an anti-tank mine or mortar fire.

As a result, the tank was destroyed and the fate of the Russian crew inside is unknown.

A mocking musical soundtrack under the clip features the veteran Tamla-Motown hit ‘Nowhere to Run’.

According to local reports, the armoured vehicle was a Soviet second-generation T-64 battle tank introduced in the early 1960s.

It was once used by the Ukrainian forces, but had fallen into Russian hands.

The tank was manufactured by the Malyshev Factory in Kharkiv, in what was the Ukrainian SSR, now Ukraine.

Ukrainian soldiers of the 57th Separate Infantry Brigade seized the wreck and said it would be cannibalised for spare parts.

As of 29th March, the Russian forces have reportedly lost over 17,200 soldiers and officers, including seven generals, 597 tanks, 127 aircraft, 129 helicopters, and thousands of other vehicles and equipment.

Russian President Vladimir Putin ordered his troops to cross over into Ukraine on 24th February in what the Kremlin is still calling a “special military operation” to “demilitarise and denazify” the European state.

Roskomnadzor, Russia’s internet censor board, has warned that any local media outlet that refers to the Russian military’s actions in Ukraine as a “war”, “invasion” or “attack” risks being blocked.

Ukraine’s President, Volodymyr Zelenskyy, has said that his government is prepared to discuss adopting a neutral status as part of a peace deal with Russia.

«Previous Post
UK Man Travels Over 1,000 Miles To See How Far He Can Get By Train In 24 Hours»Next Post
VIDEO: Gorilla In The Bliss: Silverback Once Feared Infertile Turns 31 And Now Has 4 Kids