Owls About A Snack? 6-Million-Year-Old Owl Fossil Still Had Lunch In Its Stomach

The estimated size of the bird’s eyeball suggests it was active during the day, unlike its modern nocturnal relatives. 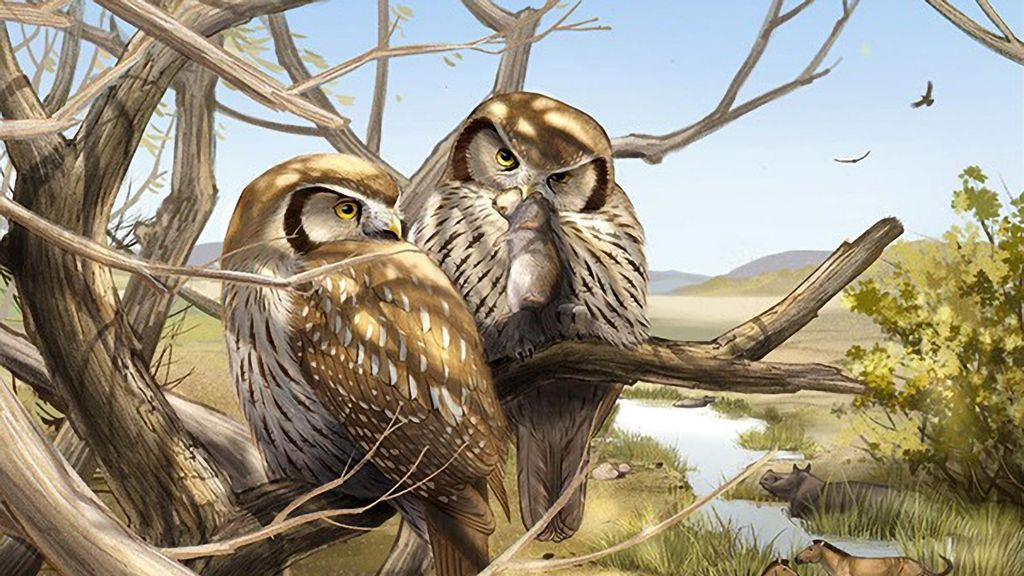 Reconstruction of the extinct owl Miosurnia diurna perched in a tree with its last meal of a small rodent, overlooking extinct three-toed horses and rhinos with the rising Tibetan Plateau on the horizon. (IVPP, Zheng Qiuyang/Zenger)

Scientists are expecting to make major advances in identifying how owls evolved based on the discovery of a remarkably well-preserved skeleton of an extinct species that lived more than 6 million years ago.

The incredibly intact fossil even included the remains of the bird’s last meal, a small mammal that was still being digested when the owl died.

The fossil was discovered at a high altitude of 6,890 feet (2,100 meters) in the Linxia Basin in Gansu, a landlocked province in northwestern China, near the Tibetan Plateau.

On studying the well-preserved remains, researchers from the Institute of Vertebrate Paleontology and Paleoanthropology of the Chinese Academy of Sciences confirmed that the fossil dates back 6 million years to the late Miocene Epoch.

They published their findings in the journal Proceedings of the National Academy of Sciences.

Even though it is an ancestor to the modern owl, the research team believes that this particular species was probably active during the day rather than the night.

“It is the amazing preservation of the bones of the eye [orbital bones] in this fossil skull that allows us to see that this owl preferred the day and not the night,” said lead author Li Zhiheng, who performed the research with co-author Thomas Stidham.

The scientists are hoping to make significant advances in determining how owls developed based on the fossil, which is almost complete, from its skull through to its wings, legs and tail bones.

It also contains other unusual parts not typically found in fossils, including the tongue, trachea and kneecaps, as well as indications of the presence of tendons in the wing and leg muscles.

The fossil has been given the scientific name Miosurnia diurna in a nod to its closest living relative, the diurnal (active during the day) northern hawk owl (Surnia ulula).

It is believed that the fossil is the first on record of a prehistoric diurnal owl.

Such creatures would have had small eyes, according to the scientists. To measure the size of the prehistoric owl’s long-decayed eyeball, they pieced together the bones that would have surrounded it.

They then compared the owl fossil’s scleral ossicles — bones within the sclera of the eye — with those of 55 reptile species and over 360 bird species, including many species of owls.

Their findings proved that the eyes of the extinct owl were less open to light. This suggests that the species was diurnal and did not need effective night vision.

«Previous Post
Scent Back: 18th-Century Perfume Could Return As German Scientists Recreate Smells From The Past»Next Post
Missouri Zookeeper Introduces Her Baby To Orangutan Friend Who Makes Funny Faces At The Newborn