Needle In A Haystack: Soldiers Flee As Ukrainian Missiles Blast Russian Base

Russian soldiers are seen milling around the settlement before a missile explodes on the boundary wall.
By James King April 1, 2022
Facebook
Twitter
Linkedin
Email 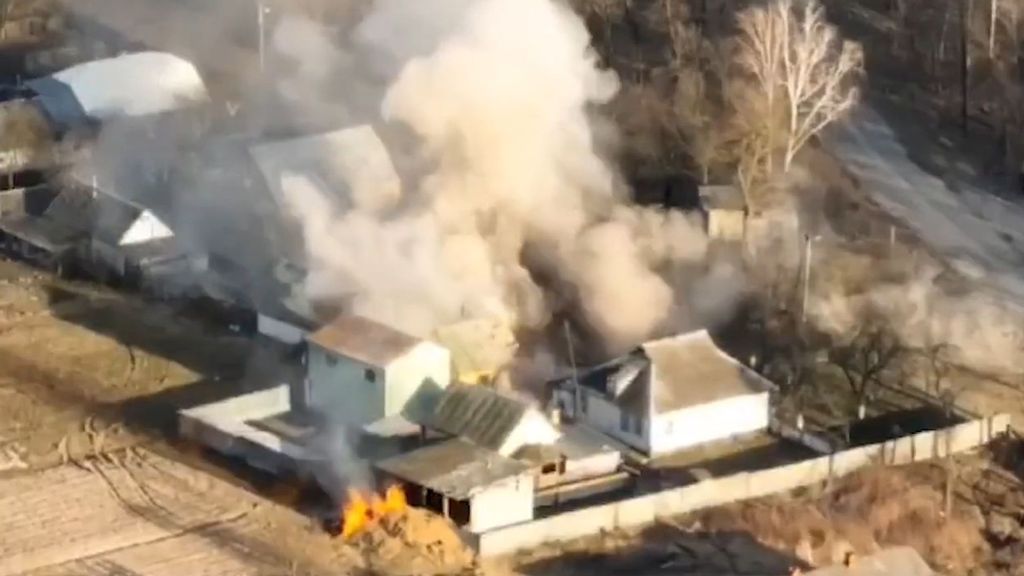 This is the moment Russian soldiers flee for their lives as the Ukrainian Armed Forces shell a settlement they have occupied.

The images were shared by the 44th Artillery Brigade of the Ukrainian Ground Forces this morning (Thursday, 31st March) with the message: “They say the day should start with positive emotions. We fully support this!”

The same footage was also shared by the Armed Forces of Ukraine, which said: “Ukrainian artillery could even find a needle in a haystack. 44th Artillery Brigade.”

In the drone footage, armed Russian soldiers are seen milling around the settlement before a missile explodes on the boundary wall, starting a fire next to what appears to be a large haystack, as referenced by the Ukrainian Armed Forces.

Moments later, around a dozen Russian soldiers are seen fleeing the area on foot before more missile strikes blast the complex.

The Ukrainian authorities did not mention where or when the attack took place.

The Ukrainian military claimed earlier today that Russian forces have lost approximately 17,500 soldiers and officers, including seven generals, 614 tanks, 135 aircraft, 131 helicopters, and thousands of other vehicles and equipment.

Russia, however, reported on 25th March that it had only lost 1,351 soldiers.

Though neither figure has been independently confirmed, independent estimates are closer to the figure given by Ukraine.

Russian forces invaded Ukraine on 24th February in what the Kremlin is still calling a “special military operation” to “demilitarise and denazify” the European country.

Roskomnadzor, Russia’s Internet censor board, has ordered local media outlets to use the Kremlin’s preferred term or risk their websites being blocked if they talk of a “war”, “invasion” or “attack” instead.

While Ukraine’s Azov Regiment has been described as a neo-Nazi group, the country’s elected president, Volodymyr Zelenskyy, is Jewish. Furthermore, Lt. Col. Dmitry Utkin, a leader of the Wagner Group, a Russian paramilitary organisation that has been deployed to Ukraine, is believed by some to also be a neo-Nazi.

Mr Zelenskyy has said that his government is prepared to discuss adopting a neutral status as part of a peace deal with Russia. Ukraine had previously enshrined its NATO and EU membership aspirations in its constitution, in 2019.