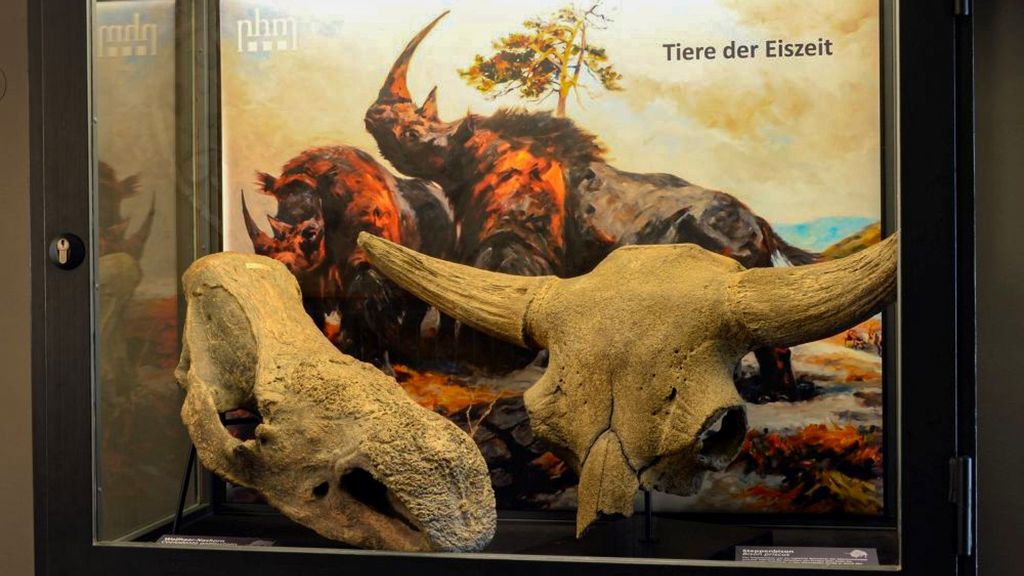 The exhibition named Animals of the Ice Age – The world of woolly rhinos and cave lions at the Natural History Museum in Austria's capital Vienna. (NHM Wien, Alice Schumacher/Zenger)

An Austrian museum will exhibit unique fossils of mammoths, woolly rhinos, and cave lions from the last ice age found scattered in an over-21,500-year-old hunter station.

The exhibition, named ‘Animals of the Ice Age – The world of woolly rhinos and cave lions’ was organized by the Department of Palaeontology and Geology in the Natural History Museum (NHM), located in Austria’s capital, Vienna.

According to an NHM press release, the exhibition is expected to captivate visitors with the revealing of three-meter-long male mammoth tusks uncovered during motorway construction work near the village of Bullendorf, located in the Weinviertel district, in the Austrian state of Lower Austria.

The mammoth’s tusks, which had been broken into numerous pieces, took months of preparation before they could be repaired and glued back together.

Due to their good condition and extensive scientific documentation, the two magnificent tusks are considered among the most important mammoth finds in Austria.

The head of the Department of Palaeontology and Geology at NHM Vienna, Dr Mathias Harzhauser, told Zenger News: “The mammoth hunter station at Ruppersthal am Wagram is unique in Austria. A group of hunters camped here 21,500 years ago, cut up mammoth carcasses with flint blades, and then carelessly scattered the bones.”

The extraordinary site was unearthed by NHM researchers, who managed to salvage the bones in bandages from the area, which covers 10 square meters, in 1970.

A special section portraying the original hunter site will reportedly be on display at the exhibition for the first time ever after it was unearthed.

The show is set in the Fossil World Weinviertel archaeological museum, located in the town of Stetten, from 2nd April to 31st October.

The Fossil World Weinviertel archaeological museum holds the largest accessible fossilized oyster reef on Earth, which dates back to around 17 million years ago.

With a collection of over 15,000 giant oysters, the reef is accessible in a 400-square-meter hall, including a 17-meter-high observation tower and a cinema.

Mammoths lived from around 5 million years ago to about 4,000 years ago. Various species existed in Africa, Europe, Asia, and North America.

Mammoths were commonly equipped with long, curved tusks and, in northern species, a covering of long hair.

The last species to emerge was the woolly mammoth (M. primigenius), which developed about 400,000 years ago in East Asia.

Some specimens are believed to have still possibly been extant during the construction of the Great Pyramid of ancient Egypt.