Ross Stallion, spotted a smoke pouring from a house, he pulled over and saw a man watching the flames engulf his home.
By Josh Brady April 1, 2022
Facebook
Twitter
Linkedin
Email 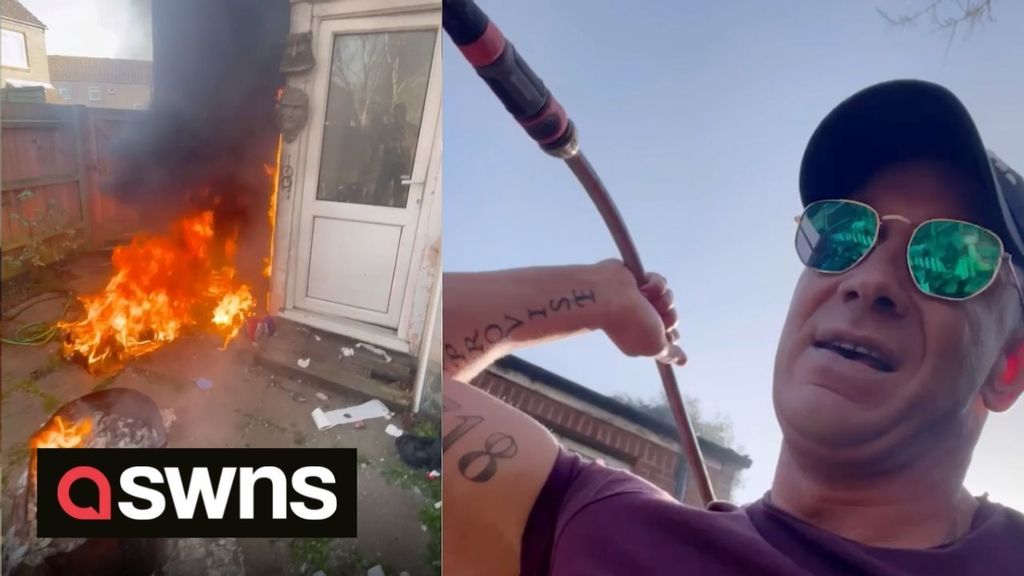 A hero passer-by leapt into action when he saw a man's porch was ablaze - and captured the entire ordeal on film. (SWNS/Zenger)

A hero passer-by leapt into action when he saw a man’s porch was ablaze – and captured the entire ordeal on film.

Ross Stallion, 45, spotted black smoke pouring from a house in Bournemouth as he drove past last week (22/3).

Worried, he pulled over and peered over the fence where he saw a man watching the flames engulf his home, and politely said: “Your house is definitely on fire – can I help you?”.

Ross, a magazine owner, scaled the six-foot fence and grabbed a washing up bowl from the man’s kitchen to douse the flames before tackling it with a garden hose.

And he filmed the whole incident – which caused serious damage to the home.

Ross, from Bournemouth, dubs himself ‘Fireman Sam’ at one point in the dramatic video, which runs for around 90 seconds.

He said: “I’m so glad I was able to help him out – that’s a good feeling. He just looked shocked. I could see he didn’t know what to do.

“He was literally in this fire, just looking at it. I don’t think he realised what was happening until I said, ‘your house is on fire, you need help’.

“I just ran in, at the time I didn’t know if the fire service had been called. His house would 100 per cent have burned down if I hadn’t done that.

“The whole back of his house was well alight, and would easily have gone up. It might have got the neighbour’s house as well.”

Ross was out test-driving his wife’s car with a potential buyer when he saw the fire in the Townsend area, at around 2:30pm.

He says the man, who Ross described as elderly, later explained that he was burning rubbish in a special bin with a funnel, which had exploded because there were aerosols in the waste.

Burning chemicals had then sprayed all up the wooden porch at the back of the house, and the flames licking the building had reached at least 20-foot high, Ross said.

The man went in through the burning doorway and started filling a bowl with water when Ross came to help.

The hero borrowed a hose pipe from a neighbour because the man couldn’t explain where to find his own.

It took about a minute to put out all the fire, Ross said, and he was back in his car having his cuts and bruises bandaged up by his customer when the fire service arrived.

Ross said: “First I used his washing-up bowl of water to throw at the fire, and it created a massive ball of steam like a fire ball.

“Then a neighbour passed a hose over the fence and I used that to put out the rest. All the man’s neighbours were there so I knew it was okay to leave him.

“I’m generally someone who would stop and help out. I wouldn’t have done anything different, and it definitely added some excitement to my day.”

Dorset & Wiltshire Fire Service were approached for further information on the blaze.

«Previous Post
Meet The Couple Who Foster Red Squirrel Kittens»Next Post
UK Man Travels Over 1,000 Miles To See How Far He Can Get By Train In 24 Hours