The butterfly seen in the video is believed to be a papilio memnon, which is also known as a great Mormon and is common to Asia.
By Emily Wu April 1, 2022
Facebook
Twitter
Linkedin
Email 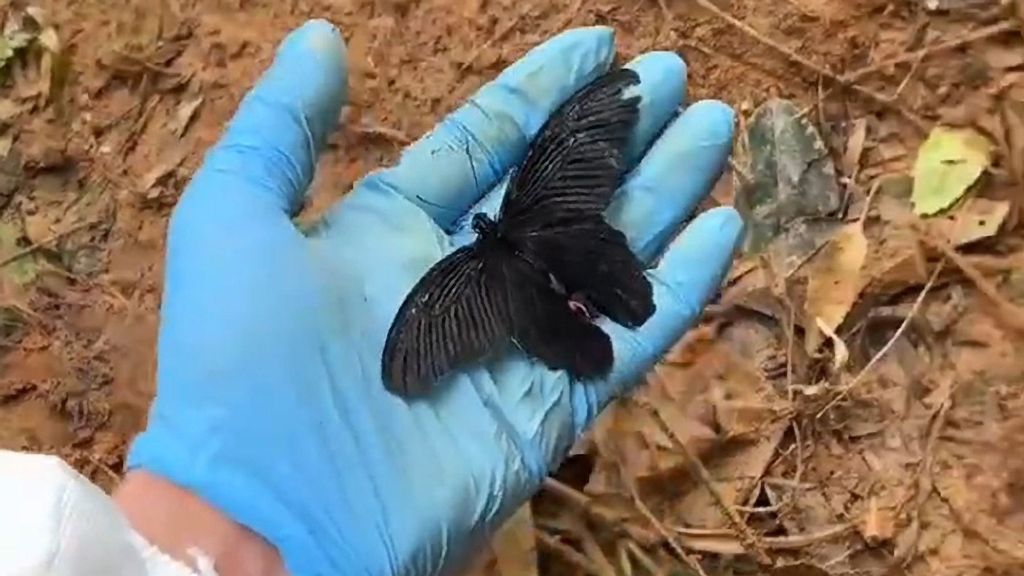 Fireman gently lifts black butterfly at the plane crash site which then flies away in Guangxi, China. (Guangxi Fire/Zenger)

This is the haunting moment a black butterfly is spotted at the crash site of the China Eastern flight on which 132 people died – with claims that it represented the soul of one of the dead.

The footage was recorded in the southern Chinese region of Guangxi and was posted online by the Guangxi Fire Service with the caption “Fly to the person you miss…” on 28th March.

In the video, a firefighter can be seen filming the black butterfly, which is on the ground at the China Eastern Airlines crash site. He can be seen taking it in his palm and then letting it fly away.

The video garnered many comments on Douyin, which is what TikTok is known as in China. Netizen ‘Zhong Xiaoping’ wrote: “I often hear people say that people who die will turn into butterflies and stay where they died.”

The butterfly seen in the video is believed to be a papilio memnon, which is also known as a great Mormon and is common to Asia.

Only the males are black and they are far more common than the more colourful females, with the males’ dark colour apparently reflecting the fact that they are often seen around muddy pools.

The search for the wreckage and the black boxes has been hampered by heavy rains, which have made the area around the wreck very muddy and which might also explain the arrival of the black butterfly.

China Eastern Airlines Flight 5735, which was flying from Kunming to Guangzhou, crashed into a mountainside in the Chinese region of Guangxi on 21st March.

All 123 passengers and nine crew members were killed.

The investigation is still ongoing.

As the butterfly takes off, the camera can be seen filming destroyed trees and bushes, which had presumably been hit by the plane. And the crash site, with wreckage strewn around, can be seen in the background, showing where experts are working to gather evidence about the reason for the tragedy.

The crash was the worst airline disaster in recent history and, so far, only one of the two black boxes has been recovered. It was severely damaged and it is unclear if it is the flight data recorder or the cockpit voice recorder.

«Previous Post
UK Man Travels Over 1,000 Miles To See How Far He Can Get By Train In 24 Hours»Next Post
Trucky Break: Lorry Driver Called Mum To Say Were Rich After Scooping GBP 4M On Scratch Card