Images show bodies, reportedly of dead civilians, being removed by the emergency services from under a bridge.
By Joseph Golder April 1, 2022
Facebook
Twitter
Linkedin
Email 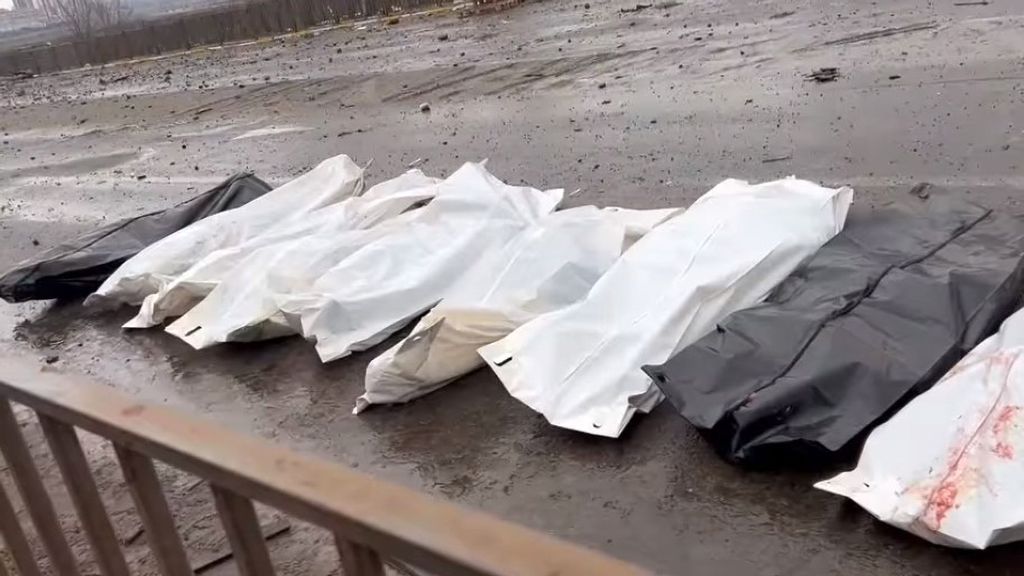 Rescuers are working to eliminate the destruction and search for the bodies of dead civilians killed by the Russian occupiers. (SES of Ukraine/Zenger).

Ukrainian emergency services more used to saving lives say they are now also struggling to cope with the task of removing the bodies of those killed in the ongoing fighting.

They show bodies, reportedly of dead civilians, being removed by the emergency services from under a bridge that is currently called home by locals, including children, who had reportedly moved there to take shelter from the bombings.

The disturbing images show scenes of desolation, with emergency rescue workers wearing bullet-proof jackets and military-style helmets as they line up corpses in body bags in the street.

Stony-faced rescuers can be seen silently carrying stretcher after stretcher, with each one representing one of the many civilians who have lost their lives in the invasion.

The images, which the rescue service said were shot in the city of Irpin, close to the Ukrainian capital Kyiv, show the oppressive silence occasionally punctuated by nearby explosions, with one setting off car alarms.

Distraught-looking rescue workers can be seen loading a corpse on a stretcher into an ambulance as the footage ends.

The SES of Ukraine said: “Irpin… In peacetime, our vocation is to save lives. But now there is war. Our citizens are dying in the occupied territories.

“And therefore, these terrible shots of the work of our guys must be seen by the world.

“Today we are not only helping to save, we are carrying the bodies of our people whose lives have been taken by the enemies.

“This is hard and dangerous work, but it must be done.”

The bombardment of Irpin is said to have been relentless, with numerous buildings and civilian infrastructure destroyed.

Irpin’s mayor, Oleksandr Markushin, has said that at least 200 to 300 civilians have been killed during the attacks.

The Battle of Irpin, which began on 27th February and ended on 28th March, resulted in a Ukrainian victory, with Ukrainian forces recapturing the city.

Some 50 Ukrainian soldiers were killed in the battle, with the number of Russian casualties unknown.

According to the General Staff of Ukraine’s Armed Forces earlier today (Thursday, 31st March), “approximately 17,500 Russian invaders” have been killed in action so far.

Russia, on the other hand, claimed on 25th March that only 1,351 of its soldiers had been killed.

Neither figure has been independently confirmed, but independent estimates are closer to the figure provided by Ukraine.

«Previous Post
VIDEO: Gorilla In The Bliss: Silverback Once Feared Infertile Turns 31 And Now Has 4 Kids»Next Post
Needle In A Haystack: Soldiers Flee As Ukrainian Missiles Blast Russian Base