The incident took place in Winter Park, which is a city located near Orlando, in the south-eastern US state of Florida.
By Joseph Golder April 1, 2022
Facebook
Twitter
Linkedin
Email 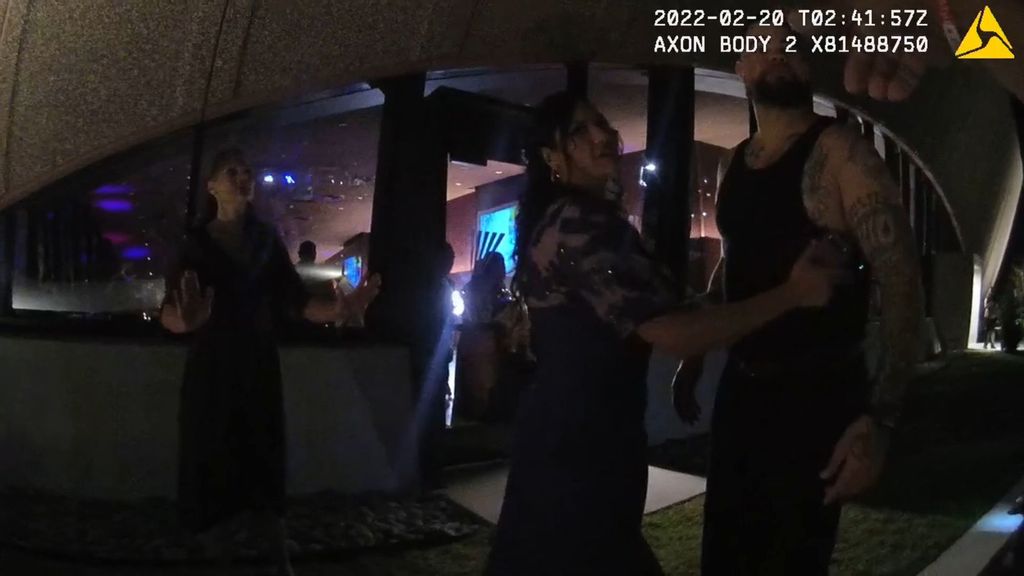 After Daniel Knight the bride's uncle started hitting the officer, the officer shot him at the wedding party in Winter Park Florida on the 19th of February 2022. (Winter Park Police Department/Zenger )

These images allegedly show a police officer shooting a bride’s rowdy uncle dead at her wedding, after the “drunk” guest knocked out his colleague in a tussle that turned to tragedy.

The incident took place in Winter Park, which is a city located near Orlando, in the south-eastern US state of Florida, on the night of Saturday, 19th February, but the images have only been released by the police now.

The wedding guest who was shot dead has been named by police as Daniel Patrick Knight, 39, of Mulberry, a city in Polk County, also in Florida, and the two police officers involved in the incident suffered “abrasions” and “bruises” as a result of him hitting them, the Winter Park Police Department said in a police report that was obtained by Zenger News.

The information contained within the report indicates that it was filed at 5.30am on Sunday, 20th February, and it states: “On February 19, 2022 at 2137 hours, Officers responded to 1050 W Morse Boulevard (Winter Park Event Center) in reference to a disturbance.

“Upon arrival, the suspect battered Officer 1 and Officer 2. The investigation was turned over to CID (Criminal Investigation Division) and FDLE (Florida Department of Law Enforcement).”

The police report does not state what happened next, but the two pieces of footage from the two police officers’ body cams do.

The images apparently show a first officer being knocked out after trying to calm the suspect down outside the wedding venue. Some of the women at the wedding try to calm him down while telling the police officers that Knight is not armed.

The footage appears to show the two police officers trying to restrain the suspect, but a woman stands between him and one of the officers. Both officers appear to have their guns drawn, and one officer apparently tries to grab the suspect’s arm. A woman wearing a purple dress can be heard telling the police officers to “back off”.

One of the police officers begins to tussle with the suspect while other women run up to the second police officer, with one of the women apparently saying “he’s just drunk”.

The police officer repeatedly tells the women to “step back”. One of the officers then tells the suspect to put his hands behind his back, but Knight then punches him in the face, apparently knocking him out cold.

The women begin to scream as the second police officer is also apparently knocked to the ground. The camera becomes shaky, but a woman dressed entirely in white, possibly the bride, unnamed, can briefly be seen in the frame.

The second piece of body-cam footage apparently shows the police officer allegedly shooting the suspect seven times while still on the ground as the suspect towers over him.

The suspect falls to the ground, where he lies motionless. Women can be heard screaming and shouting “Oh my God!”, with the woman who appears to be the bride on her hands and knees in apparent despair in front of the suspect’s motionless body.

The police officer who opened fire on the suspect is then apparently attacked by an angry woman, whom he pushes back. A man appears to attempt to drag the bride away from the scene as the screams continue.

The wedding guests, male and female, can be seen putting their hands to their heads as the shock of what has just happened sinks in.

There is unintelligible screaming and shouting, some of it apparently directed towards the police officer who allegedly gunned down the suspect, with one man standing at a distance in front of the cop with his arms spread wide as if to query what has happened.

Another male guest tells the police officer to “call a f*cking ambulance!” while making the phone hand gesture. The officer responds that it is coming now.

A female wedding guest asks them: “Is he okay?” The police officers simply reiterate their order for the wedding guests to “stay back”.

The images, which were partially blurred by the police, appear to show Knight lying on his back on the ground and bleeding profusely. One of the female wedding guests tells the police officers: “I’m a nurse.”

The police officer then appears to become irritated by something a group of male wedding guests are saying. He can be heard saying to them: “You got a problem with me?”

The officer then turns back towards the suspect lying on the ground and who is now surrounded by a group of people apparently attempting to administer first aid. A woman in a red dress appears to be trying to render assistance to the fatally shot man, but the officer who allegedly opened fire on Knight pulls her back and and shouts: “Get back!”

This is despite the woman, who has not been named but who is also visibly irritated by this point, saying: “I’m a registered nurse. I’m an ICU nurse.” But the police officer replies: “He’s got enough people over him. Stay back.”

One of the people bent over the fatally injured man can be seen apparently trying to administer CPR. The nurse tells him that she is ready to render assistance if required. A woman can be heard screaming in the background: “Why would they f*cking shoot him?”

The nurse appears to get more involved and switches out with another person, taking her turn to render assistance to Knight. People continue to render assistance to the lifeless man while the police officer attempts to begin to explain his actions to another man as the footage ends. The police officer claims in the footage that the suspect had taken his taser and that he feared for his life.