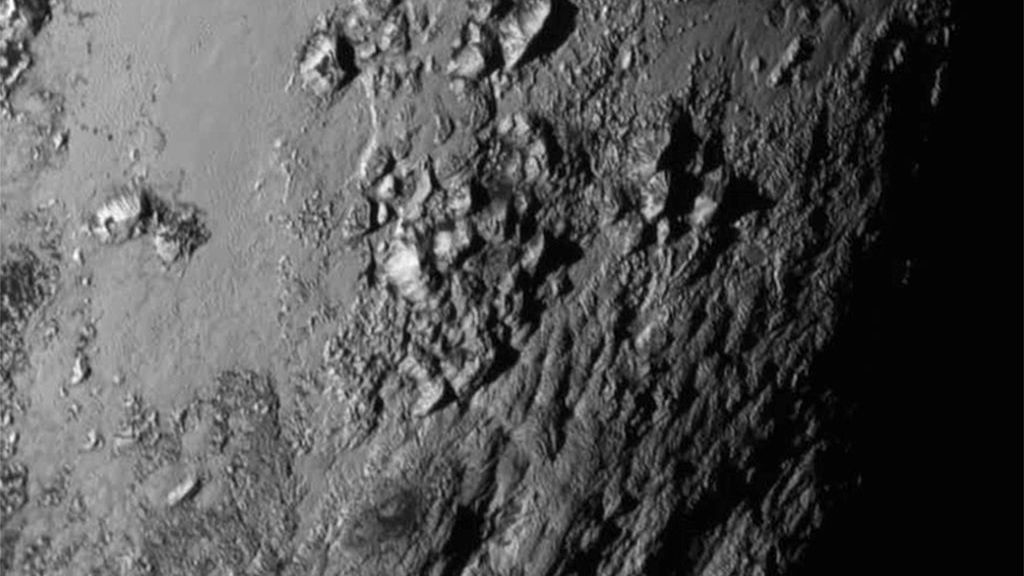 In this handout provided by NASA, a close-up image of a region near Pluto's equator shows a range of mountains rising as high as 11,000 feet (3,500 meters) taken by NASA's New Horizons spacecraft as it passed within 7,800 feet of the dwarf planet on July 14, 2015. The probe was launched Jan. 19, 2006, aboard an Atlas V rocket from Cape Canaveral, Florida. (NASA/APL/SwRI via Getty Images)

It’s not just the air on Pluto that is cold — the volcanoes on the dwarf plant are frigid, too. According to a group of scientists on NASA’s New Horizons mission team, which recently turned up new discoveries about the “geological wonderland,” Pluto’s volcanoes don’t shoot out lava when they erupt. Instead, they launch large amounts of frozen water that may have the consistency of toothpaste.

The dwarf planet Pluto, which is smaller than Earth’s moon, orbits about 3.6 billion miles away from the sun, roughly 40 times farther away than the path of Earth’s orbit. The New Horizons probe, launched in 2006 before making it to Pluto in 2015, was sent to take photos of the far reaches of the known solar system as it flies deeper into outer space.

After analyzing photos from New Horizons, a group of planetary scientists led by study author Kelsi Singer found structures on Pluto that couldn’t be found anywhere else in the solar system. Singer’s team said on Tuesday that these features are likely spawned by cryovolcanoes – or ice volcanoes – which can tower up to 4.5 miles tall.

“The particular structures we studied are unique to Pluto, at least so far,” said Singer, the New Horizons deputy project scientist from the Southwest Research Institute, Boulder, Colorado, and lead author of the paper published in Nature Communications. “Rather than erosion or other geologic processes, cryovolcanic activity appears to have extruded large amounts of material onto Pluto’s exterior and resurfaced an entire region of the hemisphere New Horizons saw up close.”

When the first pictures of Pluto from the New Horizons spacecraft made it to Earth in 2015, scientists were surprised to see mountains, valleys, plains and glaciers, evidence of a geologically active world. These land formations, like on Earth, have been created by the planet’s active geological processes, including the eruptions of ice volcanoes.

“What’s most fascinating about Pluto is that it’s so complex – as complex as the Earth or Mars despite its smaller size and high distance from the sun,” said Southwest Research Institute planetary scientist Alan Stern, the New Horizons principal investigator and study co-author, according to Reuters. “This was a real surprise from the New Horizons flyby, and the new result about cryovolcanism re-emphasizes this in a dramatic way.”

The terrain that the team of scientists studied is geologically young, meaning that it is possible that Pluto’s interior structure retained heat not too long ago, allowing for water-ice-rich materials to be deposited onto the surface, according to NASA.

In order for the structures to be formed by the flows of the ice volcanoes, the consistency of the material shot out would’ve had to be like toothpaste, oozing out and creating marvelous geographic wonders.

“Pluto is a geological wonderland,” Singer said, according to Reuters. “Many areas of Pluto are completely different from each other. If you just had a few pieces of a puzzle of Pluto, you would have no idea what the other areas looked like.”

«Previous Post
Sense Of Direction Depends On Where You Grew Up»Next Post
VIDEO: Heating Up: Scientists Race To Find Cause Of Alarming Polar Heatwave