Agony Of Iprin: Grim Civilian Toll At The Heart Of Ukraines Fightback

Rescuers and police officers continue to help citizens who were unable to evacuate the previous day and remained in the city.
By Lee Bullen April 1, 2022
Facebook
Twitter
Linkedin
Email 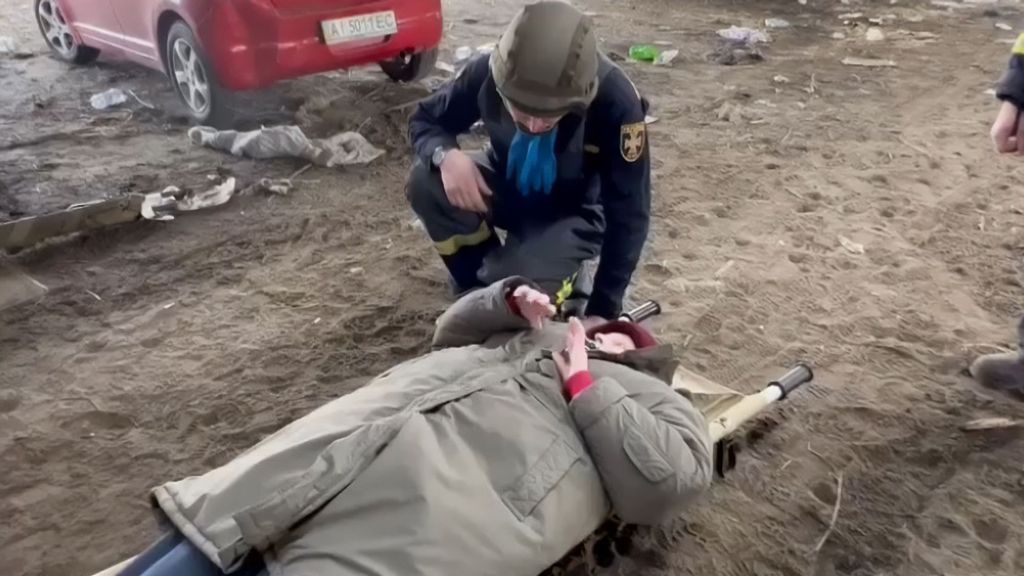 SES rescuers rescuing the residents of the city of Irpin, Kyiv region, Ukraine. (SES of Ukraine/Zenger)

This is the moment Ukrainian soldiers help elderly, battle-weary citizens across a blown-up bridge after retaking Irpin from the Russian invaders.

The heartbreaking scenes were filmed in the city of Irpin, located on the Irpin River, in the Ukrainian region of Kyiv Oblast, which surrounds the country’s capital, Kyiv.

The State Emergency Service (SES) of Ukraine said on 31st March: “What we are living through today in the long-suffering city of Irpin.

“For a long time, Ukrainians are eliminating the consequences of ‘Russian measures’ in the Kyiv region.

“Residents cannot return to their homes because the occupier has ‘liberated’ thousands of Irpin residents of life.

“For the second day, SES rescuers are helping those fleeing from the horrors of war to reach a safe place.”

SES added: “We gladly help both people and animals who are affected by the actions of the ‘liberators’.”

According to the Ukrainian authorities, defending troops have liberated Irpin from the Russian invaders. However, residents are not allowed to return to the battered city for the time being.

Roadblocks have yet to be taken down and living conditions in the devastated urban area need to be improved and numerous zones rebuilt.

The SES shared the images on social networks to show the world what the city has been going through in recent days.

Rescuers and police officers continue to help vulnerable citizens who were unable to evacuate the previous day and remained in the city.

Using stretchers for elderly and disabled citizens, Ukrainian defenders are moving the remaining residents to a safer place.

If the Ukrainian forces manage to hold Irpin, the authorities estimate that it will take around a month to create suitable living conditions for residents and several months to rebuild the city on a larger scale.

The mayor of Irpin also shared photos of the destroyed city.

On Wednesday, mayor Oleksandr Markushyn said that between 200 and 300 civilians were killed during the battle to retake Irpin from the Russian forces.

He added that around 50 Ukrainian fighters had been killed in Irpin, with some bodies still trapped under rubble.

Russian President Vladimir Putin sent troops into Ukraine on 24th February in what the Kremlin is still calling a “special military operation” to “demilitarise and denazify” the European state.

Ukrainian President Volodymyr Zelenskyy has said that his government is prepared to discuss adopting a neutral status as part of a peace deal with Russia.