The support and mentorship of other women can make all the difference.
By Adriana Navarro April 1, 2022
Facebook
Twitter
Linkedin
Email 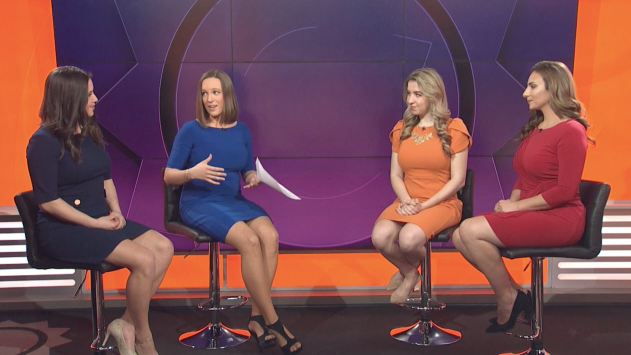 In a field largely dominated by men, AccuWeather broadcast meteorologists Melissa Constanzer, Michelle Rotella, Jessica Pash and Kristina Shalhoup, all credit a large part of their success in meteorology to one main influence — the support and mentorship of other women.

“A lot of people don’t see it, but we struggle,” Pash said in a panel with the three other women for AccuWeather Prime. “You see our smiles on the television, but it’s a hard business to be in, and it’s even more amazing to have a woman that is there to kind of be your champion.”

For Pash, it was the chief meteorologist at her second job who took her under her wing, teaching her what it was like to have a real mentor in the business and supporting her through accomplishments and tough times, alike.

Despite the lack of diversity in the field, she soon found herself working with other women meteorologists early on in her career — a slightly different experience than the other women on the panel. And now, whenever she returns to her alma mater of Rutgers University, Pash said she’s seeing more and more women enrolled in the meteorology program.

“I think that’s kind of a step to see more women taking part in the science field and not being — I don’t know if ‘intimidated’ is the word — by all the men in this business and in STEM fields in general, but go for it,” Pash said. “Don’t be afraid to be in a male-dominated field, because it still very much is, but we can change that by taking that challenge and going into that business.”

Shalhoup said she grew up playing a male-dominated sport before going into the male-dominated field of meteorology, emphasizing that it can be intimidating at times and that expectations can often be different for women. She didn’t start out in meteorology, but as the daughter of a science teacher, she grew up with a love for the subject.

Shalhoup would go on to use her communications degree toward a career in broadcasting — but not as an anchor. Instead, her first boss asked her to cover the weather.

“It took me five days, and I figured it out,” Shalhoup said. “All of the science that I loved growing up, this is my way to actually use that and help the public and make this a part of my life.”

Her mother also played a large role in encouraging her, supporting her whenever she had difficulty with a lesson or problem.

“‘You’ve been doing this your whole life, whether you realize it or not. It doesn’t matter what you’ve done in your past, just know that you’re working towards your future,'” she would tell Shalhoup.

“And it’s nice to have that kind of support from other women, and I feel like that’s been one of the benefits of being a woman in this field,” Shalhoup added. “I feel like we kind of have each other’s backs in that way.”

Rotella’s original goal was to join the Hurricane Hunters, and she had gone as far as joining the Reserve Officers’ Training Corps (ROTC) at Florida State University to start that journey. However, a knee injury prompted her to take a step back and reconsider how she wanted to approach the industry.

She landed on broadcast meteorology as a way to get information to the public while also continuing with her passion for weather.

But it wasn’t without its hard-fought battles.

Calculus courses and differential equations proved to be a hurdle, so Rotella sought out help from a tutor.

“If it wasn’t for her, I don’t know if I would have made it that far, but I actually ended up being really good at math after all that training,” Rotella said. “I just think it’s just important for people, even if they look at something and they say, ‘I really love this, but I don’t know if I can do that,’ give it a shot. Get out there and get some help. Don’t be afraid to ask for help because going through all of that led me to becoming a meteorologist, and I wouldn’t take that back for anything.”

Rotella said that the job isn’t without its emotional labor. Plus there are the expectations that come with getting ready for a live shot – the hair styling and applying makeup, in addition to the time needed to mic up compared to men, who can carry the devices in their pockets – to working long, irregular hours that all can have an impact on one’s mental health, she explained.

“Sometimes as a woman in this industry you do feel the need to go above and beyond to be accepted or to prove you have just as much knowledge, or are worthy of a position such as ‘chief’ or ‘senior’ [broadcast meteorologist],” Rotella added.

While she didn’t have a mentor until her job prior to AccuWeather, Rotella said that she has since been able to hand down her own experiences to at least three or four other women.

“I just think it was really important, as [Pash] mentioned, women helping women, to be able to give back and to help the other ladies that I have helped get their first job or help them put their reel together or just always give suggestions,” Rotella said.

Originally, Constanzer had her heart set on becoming a cardiologist. That changed in high school, however, with Hurricane Katrina. She used her love of the coast and fascination with the weather to help her prepare people to stay aware of the weather, and soon after found herself in broadcast meteorology. However, there’s more to the job than just the science.

“As a TV meteorologist, we like to think it’s all about the science. But the reality is it’s so much more,” Constanzer said. “There’s not just the communication aspect to the job, which is challenging in its own right, but it’s also a visual medium. That means there are certain expectations when it comes to your personal appearance.”

She added that while this applies to both men and women she felt that the bar was slightly different for women in the industry than men. While men still wear some makeup to prevent any shine from the lighting, she said they aren’t expected to wear products like eyeshadow, eyeliner or lipstick.

“As a woman in the industry, I’m not allowed to go on television without these products applied properly to management’s approval,” Constanzer said.

Regarding a broadcast meteorologist’s wardrobe, she said that viewers will note, sometimes unfairly, when a woman wears the same dress twice within a month.

“I know some of my male counterparts have worn the same suit and shirt several times in the same week (sometimes even a tie repeat too) and have never been called out on it,” she added.

While AccuWeather is the first job she’s had where she’s working with other women meteorologists, she still keeps in touch with friends in college who went into STEM fields.

“They all have science careers, and it all seems so unique and so interesting as to how they’ve gone through things, and I’m so proud of all of them because they’ve worked so hard to get to where they are and they certainly have different challenges overcoming those obstacles,” Constanzer said.

She noted that while she has had bosses who have told her flat out, “Well, you’re a woman, you actually can’t get that job,” she has had several male mentors who have helped her get where she is today.

“There are certainly some men that are just as supportive of women and helping them come up (through the ranks), so it really can be everybody else helping each other getting there and realizing that you’re not that competition,” Constanzer said. “You’re all trying to kind of get to your own places and if you can help someone along that journey, that’s so great.”