Both sides of the Russia-Ukraine conflict maintain a lot of firepower in the air.
By Joseph Golder March 31, 2022
Facebook
Twitter
Linkedin
Email 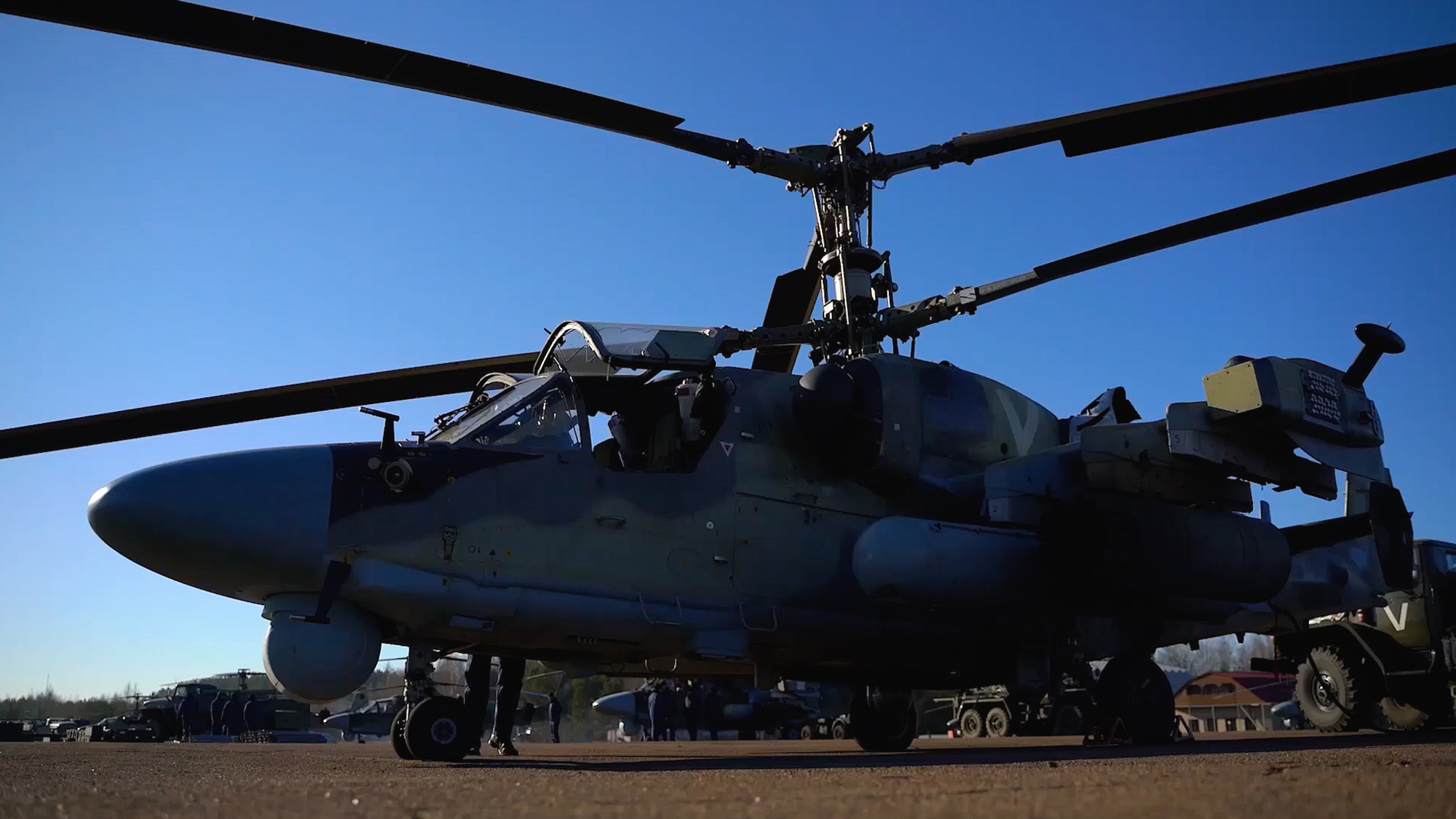 Ka-52 attack helicopters of the Russian Aerospace Forces were supposedly filmed destroying fortified strongholds and firing positions of armored vehicles of the Armed Forces of Ukraine. (Russian Ministry of Defense/Zenger)

A Russian attack helicopter is seen flying close to the ground before opening fire and unleashing its ordnance on unidentified targets in a video released by the Russian Ministry of Defense.

“Ka-52 attack helicopters of the Russian Aerospace Forces” destroy “fortified strongholds and the firing positions of armored vehicles of the Armed Forces of Ukraine,” the ministry said in a statement released March 31 along with the footage.

It depicts a pilot, whose face is deliberately blurred, climbing into an attack helicopter as missiles are being loaded on the side of the aircraft. Its dual rotors can then be seen spinning before the aircraft takes off into the sky.

A second helicopter takes off and joins it in flight.

The footage goes on to show one of the attack helicopters flying low and firing at the targets. The two helicopters are then depicted landing back at their base, and one of the pilots, sporting a Kalashnikov assault rifle, gets out of the cockpit as the footage ends.

“Army aviation crews launched guided and unguided missiles in pairs from low altitudes, destroying a disguised command post and stronghold of the Armed Forces of Ukraine,” the Russian defense ministry said in the statement. “Armored vehicles and enemy manpower were destroyed by a missile strike by army aviation helicopters.”

The Russian defense ministry did not reveal where the attack took place.

Russia’s Ka-52 attack helicopters are the Kremlin’s answer to U.S. helicopter gunships such as the Apache. They are versatile combat vehicles capable of destroying ground targets such as buildings, vehicles and people, and they can hold their own against slower-moving aerial targets.

The Ka-52 is a twin-seat variant of the Ka-50 attack helicopter introduced in 1995, which was widely used in previous Russian military campaigns, such as the invasion of Georgia in August 2008, which lasted 12 days and resulted in a Russian, South Ossetian and Abkhaz victory. Georgia to this day considers the republics under military occupation by Russia.

On the other side of the air war, Ukraine’s Ministry of Defense claims Russia has lost dozens of military helicopters since the fighting began.

“Russian air-warfare doctrine, plus a shortage of precision-guided munitions, all but forces its fighter and attack pilots to fly low and slow underneath cloud cover within just a few miles of Ukrainian troops,” David Axe, who writes about military equipment for Forbes magazine, wrote. “It’s a recipe for disaster.”

«Previous Post
VIDEO: Dog Of War: Jessie The Ukrainian Frontline Pup Knows When Russian Bombs Are Coming»Next Post
Sense Of Direction Depends On Where You Grew Up