VIDEO: In The Pink: Fugitive Flamingo Thrives After 17 Years On The Run

The bird, which escaped from a Kansas zoo, was spotted in Texas.
By Lee Bullen March 31, 2022
Facebook
Twitter
Linkedin
Email 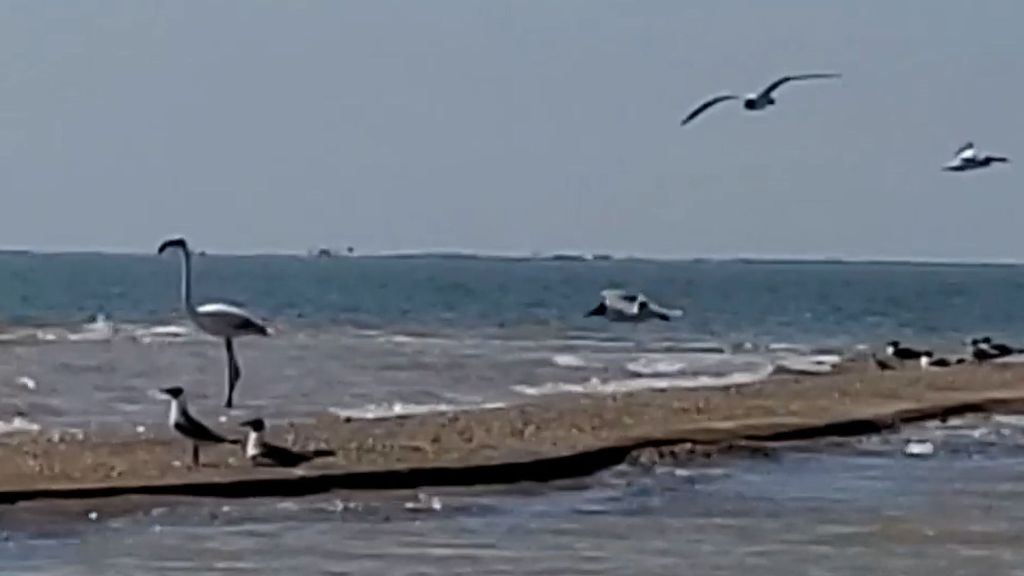 The fugitive flamingo on the Texas coast is spotted 17 years after escaping a Wichita Kansas, zoo during a storm. (Texas Parks and Wildlife Department Coastal Fisheries/Zenger)

A fugitive flamingo visited the Texas coast after escaping from a zoo in Kansas in 2005.

The flamingo was spotted at in Cox Bay, located in Calhoun County, Texas, earlier this month.

The Texas Parks and Wildlife Department—Coastal Fisheries said on March 26: “Looks like Pink Floyd has returned from the dark side the of moon! Spotted at Rhodes Point in Cox Bay near Port Lavaca by David Foreman on March 10.

“Pink Floyd is a local Texas flamingo that escaped a Kansas zoo in 2005 and has been seen on the Texas coast for several years.”

The flamingo is actually known as Number 492, as displayed on its tag, and is one of two escaped African flamingos.

“Pink Floyd” is better known as the Chilean flamingo that escaped the Tracy Aviary in 1988 and lived in the Great Salt Lake in Utah until 2005. Pink Floyd was such a local legend, there is now a downtown Salt Lake City mural in the flamingo’s honor.

The large bird spotted in Texas fled along with another flamingo from Sedgwick County Zoo, in Wichita, Kansas, during a storm on June 27, 2005. They separated shortly after escaping from the animal park.

Number 492 headed south toward the Gulf Coast, while its runaway companion ventured north and has not been seen since its escape.

The zoo pointed out the birds’ feathers had not been clipped in some years, which means they are able to fly.

The zoo also said that staffers have never tried to capture the two birds since their escape, as attempts would probably distress the flamingos and disturb local wildlife.

There are two species of Old World flamingo: the Greater flamingo and the Lesser flamingo.

The former is widespread. However, the latter is categorized as “near-threatened” by the International Union for Conservation of Nature, due to its declining population and low number of breeding sites, some of which are threatened by human activities.

In addition to Africa, the Greater flamingo is found in the Indian subcontinent, the Mideast and in Southern Europe. The latter is also found in India.

Most of the plumage of both species is pinkish-white in color.  At age six, the wading birds begin to mate. Social animals, they live in large groups.