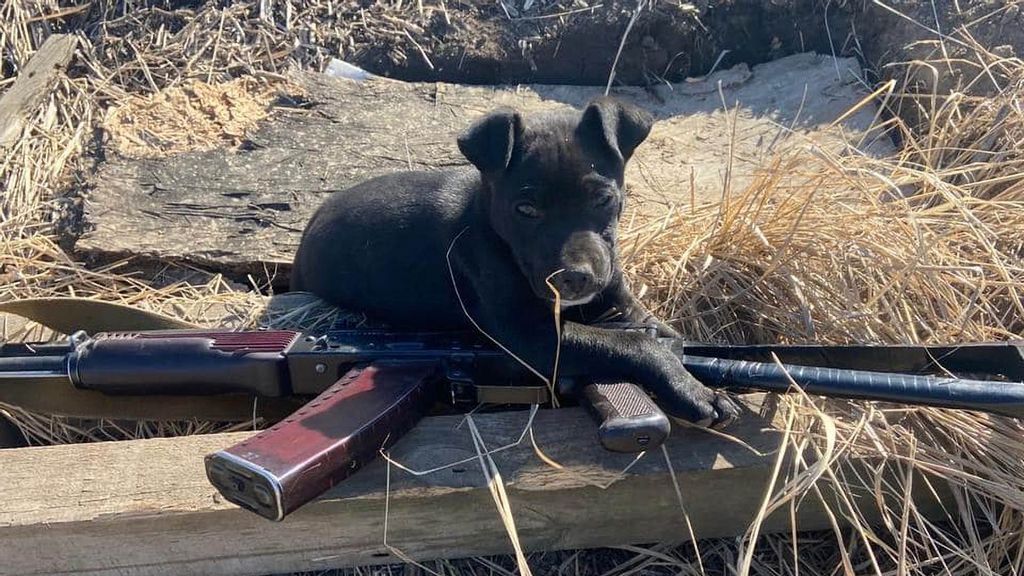 The one-month-old dog Jessie allegedly hears the difference between Russian and Ukrainian bombs and has become a symbol of the resistance forces. (@DPSUkraine/Zenger)

A puppy named Jessie, born in Ukraine on the war’s front lines a month ago, supposedly hears the difference between Russian and Ukrainian bombs and has become a symbol of the resistance forces.

The State Border Guard Service of Ukraine shared images of Jessie on social media and said the puppy “walks in uniform” and “recognizes the types of shelling by sound,” and it declared that “the defender of the new generation has been born!”

“The guys came up with a special outfit for her, she patrols the border with them to keep an eye out for Russian invaders attempting to destroy their way of life,” the State Border Guard Service said in a statement accompanying the video release.

“When the puppy feels in danger, she starts barking and thus warns the defenders of Ukraine,” the border service said, adding that she “is so attached to the border guards, she dressed up like them and eats and rests” in their company.

“After the war, Jessie will definitely go home with one of the border guards.”

Dogs assisting the Ukrainian troops have been a vital part of the war effort — whether as companions, watchdogs or by, in some cases, using their ability to sniff out explosives.

“News from Patron! Our militant dog – the mascot of Chernihiv pyrotechnicians continues to serve!” the State Emergency Service (SES) of Ukraine said in a caption accompanying a video release of Patron in action on March 19.

“Since the beginning of the war, he and SES sappers have cleared almost 90 explosive devices,” the service said.

“Thank you, friend, for your tireless work!” the SES added in its video release.

Heroic dogs don’t mask the realities of the war’s costs in lives lost and forever changed — or the behind-the-scenes politics going on.

On Thursday, the Kremlin refuted U.S. claims that Russian President Vladimir Putin was being misled by his advisers about his country’s war performance.

“Neither the State Department nor the Pentagon have real information about what is happening in the Kremlin,” Kremlin spokesman Dmitry Peskov said in a daily news briefing.

“They just don’t understand what’s going on in the Kremlin,” he said, adding that “such a complete misunderstanding leads to erroneous and rash decisions that cause very bad consequences.”

U.S. intelligence had indicated that there is “tension” between Putin and the Russian Ministry of Defense, supposedly because Putin’s senior advisers are too afraid to tell him the truth about Russia’s battlefield failures.

“We believe that Putin is being misinformed by his advisers about how badly the Russian military is performing and how the Russian economy is being crippled by sanctions because his senior advisors are too afraid to tell him the truth,” an unnamed U.S. official told NBC News.

«Previous Post
Sotheby’s Expects To Auction A 1959 Receipt For An Imaginary Piece Of Art For Nearly $551,000»Next Post
Mammals ‘Put Brawn Before Brains To Survive The Post-Dinosaur World’