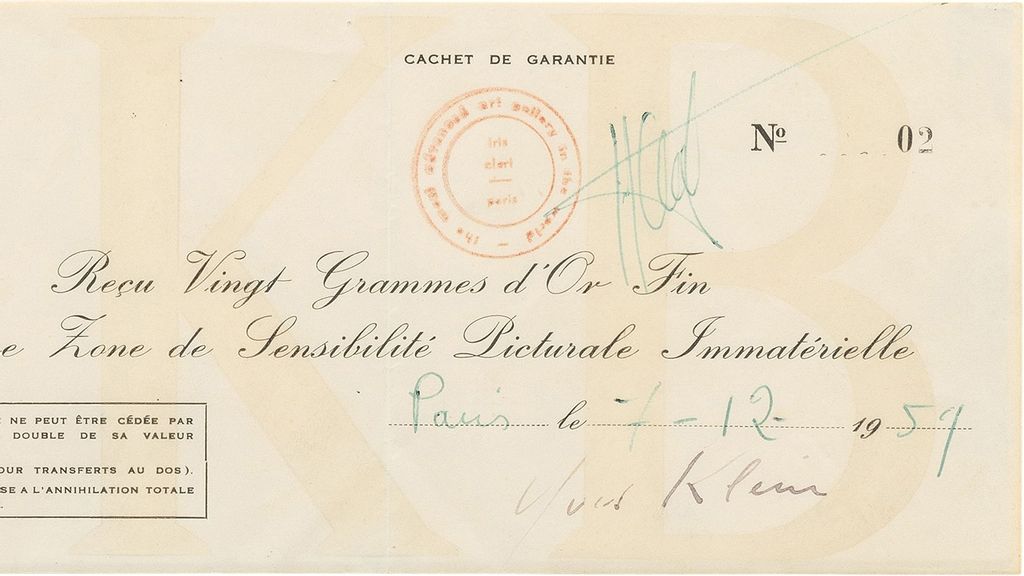 A receipt for an invisible artwork by Yves Klein is on auction at Sotheby’s, in March, 2022. Note: Photo provided by Sotheby’s. (Sotheby’s-ArtDigital Studio/Zenger News)

The receipt, set to be auctioned in Paris April 6, was issued by French artist Yves Klein. Sotheby’s France compares the artist’s “revolutionary concept” to today’s blockchain, considering it a precursor of sorts to the digital NFT (non-fungible token).

The idea is to allow art lovers to become owners of chunks of a “zones of immaterial pictorial sensibility” or “zones de sensibilite picturale immaterielle” in French.

The auction house will accept bids in cryptocurrency.

Klein, who died in 1963, is famously quoted as saying: “I will enter the largest workshop in the world. And I will only make immaterial works.”

Sotheby’s said in a statement: “On April 28, 1958, the exhibition ‘The Void’ opened at the Iris Clert Gallery in Paris, whose space was cleared of all contents for the historical opening.”

The artist had explained that “far from being empty, the gallery was, on the contrary, saturated with ‘pictorial sensibility in its pure state.'”

Sotheby’s said: “A few months later, the finalization of the receipts and the ritual accompanying the ‘transfer’ made it possible to inscribe this ‘sensibility’ in the field of visual arts for good, and for each collector to become the definitive owner of a ‘zone of immaterial pictorial sensibility.'”

In order for the transaction to happen, the receipt the artist gave buyers, in exchange for a payment in gold, had to be burned in front of witnesses he chose. Klein would then toss the gold into the River Seine, which flows through the French capital.

Sotheby’s said: “There were three transfer ceremonies — all well documented. Some have likened the transfer of a zone of sensitivity and the invention of receipts as an ancestor of the NFT, which itself allows the exchange of immaterial works. If we add that Klein kept a register of the successive owners of the ‘zones’, it is easy to find here another revolutionary concept — the blockchain.”

The auction house said this rare, surviving receipt, from the Collection Loic Malle, has been regularly displayed over the decades.

Sotheby’s said: “The first owner of it, the very famous antique dealer Jacques Kugel, acquired it from Yves Klein on 7 December 1959.”

It was then acquired in 1986 by Malle. Sotheby’s describes him as a “great art connoisseur, historian, critic and former gallery owner.”

Sotheby’s said of the Malle collection: “Yves Klein claimed that in order to understand and appreciate art, you must soak it up like a sponge. Loic Malle took this approach to heart when assembling his collection, which reads like an anthology of contemporary art: an incredible array of works reflective of his many artistic encounters over the years with dealers, critics and curators.

“But the works in the Malle collection are not just reflections of a particular taste or time. They all follow a common theme: that of experience in all its forms.”

The live auction, during which numerous other items from the “Collection Loic Malle” will go under the hammer, will take place at 5 p.m. in Paris on April 6.

An earlier version of this article incorrectly stated the expected sale value as up to $551 million. It’s expected to sell for up to $551,000. Zenger regrets the error.